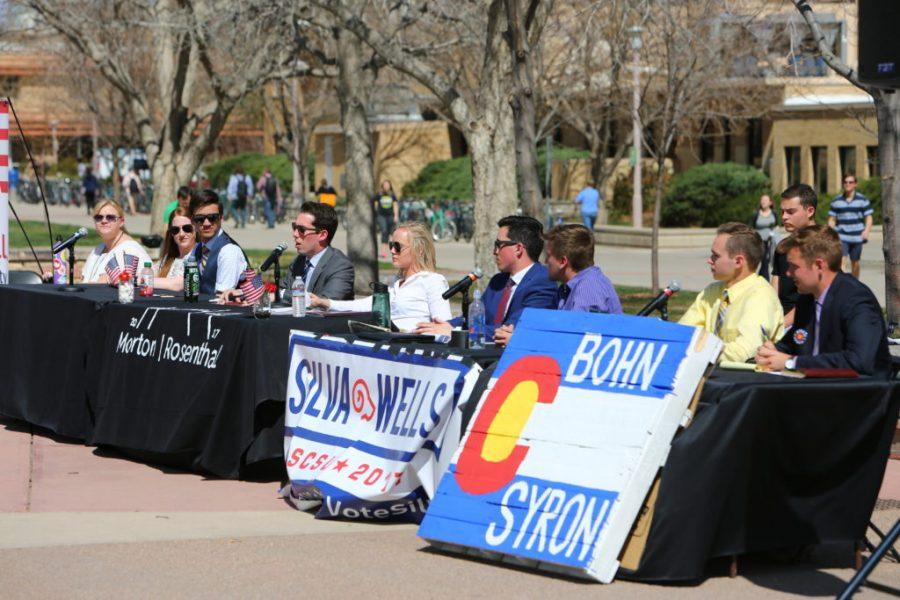 Student fees and the need to improve transparency between members of the Associated Students of Colorado State University and the student body were discussed by the four campaigns for the ASCSU presidential candidacy Thursday afternoon on the Plaza.

The four campaigns had two minutes to respond to questions specific to their campaigns from moderator Tyler Siri. Siri also asked different campaigns the same questions if they related to student concerns.

The four campaigns repeatedly highlighted how they would increase transparency between members of ASCSU and students.

Edward Kendall’s campaign said they would work to improve the culture of ASCSU by working on issues that impact the student body.

“The culture of an organization is the most that your leadership is willing to accept,” Kendall said. “(Kyrie Merline and I) will only accept the best in our culture in ASCSU. We’re here to do things for students that really impact students and we’re not going to put anything on the table that I couldn’t deliver to you in the next year.”

Josh Silva’s campaign wants to continue promoting openness in the ASCSU offices like they have in their roles in the Department of Finance.

“When we met for the first time ten months ago, (Michael Wells and I) talked about having an open door policy for the finance office,” Silva said. “To us, the presidency is not about being great, it’s about enabling others to be great and striving to continue promoting that inclusive environment.”

Hailey Morton’s Vice Presidential candidate, Yuval Rosenthal, said they would increase transparency with student fees by sending out emails to students when bills regarding student fees are passed.

“If you go on the (ASCSU) website and look for a budget, it does not show up,” Rosenthal said. “We would really like to increase transparency in the sense that once budgets are proposed in the senate and passed, we would like to send out an email with the attached budget so students can see where their student fees are going.”

“I think we could look at the budget of other student fees and possibly we could decrease the student fee in order to allocate over to the technology fee,” Bohn’s running mate, Tristan Syron, said. “I think if you asked every single student in Clark, ‘would you be willing to pay $2 more a year in order to get new wifi?’ The answer would be overwhelmingly ‘yes.’”

Speaker of the Senate Debate

The three candidates campaigning for the new Speaker of the Senate position, Isabel Brown, Jennifer Murray and Bayler Shubert, answered questions during the last half hour of the debate.

Murray said she would increase accountability within the senate body by providing training to new senators.

“I feel like, as new senators, you come in and you have no idea what you’re doing,” Murray said. “We need to increase the training that our senate membership officer, senate outreach officer gives to these prospective senators and train them properly so they know what to do on the first day before they take their oath.”

Murray said she would write job descriptions for the senate member officers and senate outreach officer on how to train new senators to properly represent students.

Shubert said his platform focuses on increasing involvement with students outside of ASCSU, since many students he has spoken with do not feel they are represented in ASCSU.

“I really want to try to facilitate programs to try to institute a lot of inclusion and try to outreach more so people know what ASCSU is,” Shubert said. “I want to do everything I can to not only continue the outreach programs that we provide but as well as trying to get people involved and understanding what’s going on.”

Brown said she would develop a process to reduce what she sees as senators pushing their own political motives.

“I see often senators seem to be playing some sort of political game instead of representing their students adequately and a voice for them in their student government,” Brown said. “As Speaker of the Senate, I plan to replace those politics with a very strong sense of process ensuring that a professional culture is cultivated instead of more of a tricky political arena.”

Brown said her process will be at the first and foremost point of view if she is elected and she will create more transparency for the community and ensure that diverse views are represented in the senate.

The second debate for the candidates will be held March 29 from 6 p.m. to 8 p.m. in the Lory Student Center Theatre, will be moderated by a reporter for the Rocky Mountain Student Media Corporation and broadcasted on CTV Channel 11.