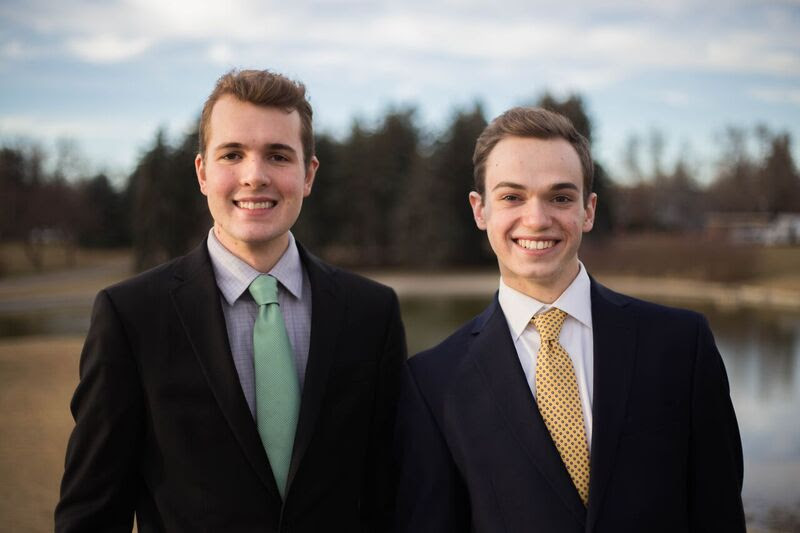 Time is of the essence for the Nick Bohn and Tristan Syron campaign for the upcoming Associated Students of Colorado State University student body elections.

The two have campaigned on the Plaza this week with signs that read, “It’s Time for You.”

Bohn and Syron both bring experience in ASCSU to their platform and wish to focus on openness and transparency with the organization as it relates to the rest of the student body.

Bohn said he feels it is up to them to make sure every single person on campus knows someone within ASCSU and that it is their job to go out and engage with the students.

Bohn is the director of outreach at ASCSU, and has changed the position since he has held it.

Bohn sees his position as getting more students involved on campus and encouraging collaboration between on campus clubs.

Bohn gives tours of the ASCSU office when people walk in and ask what the office is. He attributes many of the new senators to those who have just walked into the office.

Bohn has worked to make sure ASCSU is a presence for multiple clubs on campus, who might not have had an ASCSU member come to their meetings before.

“You’re my job. I love you. You’re what I care for,” Bohn said of the clubs and students on campus. “It keeps me up at night.”

Bohn’s running mate, Syron, said the presidential candidate is not kidding when he says it keeps him up at night: Syron said he receives emails from Bohn about new ideas at 3 a.m.

Syron is an associate senator for college of liberal arts in ASCSU. He said he has been offered a senator seat many times and turned it down, because he only views it as a resume booster. His concern is about getting individuals from his college involved in the college council and in ASCSU.

Every single senate and associate senate seat has been filled under Syron, current president of his college council. Representation for the college is a priority for him.

Within ASCSU, Syron sees himself on all sides of the spectrum in terms of paperwork, or the bills ASCSU has written and passed on the senate floor.

“(Bohn and I) have a lot of different interests. Between the two of us and all the different boards we sit on, we (cover) a wide scope,” Syron said.

As vice president and president, both Bohn and Syron plan to stay involved on campus.

Much of their campaign platform is built off their involvement with students on campus and listening to what those students want. They said their platform continues to grow as students continue to bring them ideas as the pair campaign on the plaza this week.

“We have so many policy ideas they couldn’t even fit on the bulletin board,” Syron said.

Student concerns range from support for international students to parking to innovative technologies to the new stadium to student fees.

“There’s a huge stigma around student fees. No one really knows where they go,” Syron said.

Part of the transparency the pair wants to bring to ASCSU is a way for students to log on and see where their money goes within the organization. Syron advocates for a pie graph on the website to easily detail where fee money goes. Both want to see more of the money students pay spent on the students themselves.

Their platform also entails reworking the current bylaws in place for clubs to receive funding through ASCSU. They feel more funding will lead to more events and more student involvement.

Syron voted to bring immigration lawyers to campus, in light of recent national events. Bohn is currently advocating for a Middle Eastern Cultural Center and plans to continue to do so next year.

“I think there is a need for it,” Bohn said. “(Students that identify as Middle Eastern) need a center where they can feel safe.”

Bohn and Syron want to use technology to help students as well, with ideas such as creating an app for CSU students in order to buy and sell items like books and furniture.

Parking and the new stadium are topics the team say they are ready to tackle head on.

Syron is not a football fan, while Bohn is excited for the new stadium. The pair want to look at tailgating from the perspective of all students and make sure compromise happens.

“That’s what I really like about us. We disagree on a lot.” Syron

“My passion is other people’s passions,” Bohn said. “My energy is for CSU as a whole.”

Bohn and Syron both have a history of their involvement leaving a lasting legacy.

“We don’t just come in with ideas. We come in saying, ‘This is what we’re going to do,’ and (we have follow through),” Syron said.

Bohn, as a hall council president last year, implemented waffles available all day at the dining halls and volleyball courts put in outside of Westfall and Durward.

Syron, on the College of Liberal Arts Dean’s Leadership council, has organized service outreach and canvassing for a local city council candidate and handed out donuts donated in Clark A. Syron is currently in collaborative works to design a new Clark building, after seeing the response to the Clark video from earlier this semester.

“We’re here to bring the energy. There is no amount of work we’re not willing to put in. We’re willing to give absolutely everything we have to the students of CSU,” Bohn said.

Bohn continued to reiterate that it is the time for students on campus to have their voices heard, particularly by the Bohn-Syron campaign.

“What do you think it’s time for on campus?” Bohn asked.