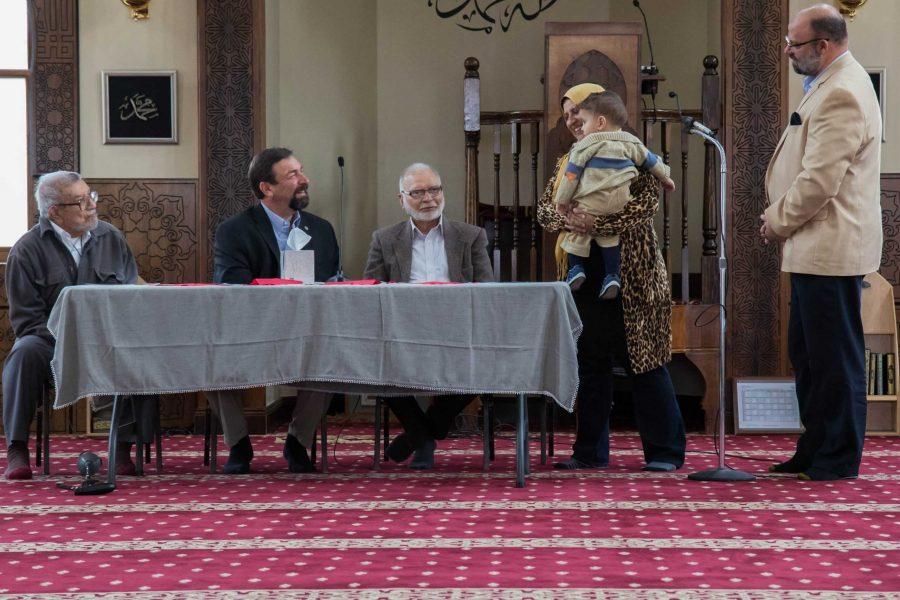 Hanna Isweiri, a student that was trapped overseas, thanks CSU President Tony Frank for all he has done to support her. (Julia Trowbridge | Collegian)

In a show of solidarity and support for the Muslim community of Colorado State University CSU President Tony Frank and other faculty members joined the Islamic Center of Fort Collins Saturday morning to address concerns and share a meal.

Lately, tensions between Muslim communities and the rest of the country have been high. At CSU, President Donald Trump’s travel ban ended in three students being trapped abroad. In response to the executive actions and anti-muslim and immigrant rhetoric the Fort Collins Community organized rallies like  Marching in Solidarity with Our Immigrant and Muslim Neighbors, Protect Our Muslim Neighbors Rally and To Immigrants with Love.

Although it was not a political event the visit provided an opportunity for CSU to demonstrate their support of the Muslim community of CSU.

“There are times, and I think unfortunately we are in one of those times, where we can focus too much on the things that divide us and yet these are relatively small things,” Frank said in an address to community members.

One of the present community members was Hanan Isweiri, a CSU PhD student who was trapped abroad in Libya with her baby following President Trump’s travel ban. After weeks of email correspondence Isweiri and Frank met in person for the first time. Isweiri expressed gratitude for the support she received from Frank and the university as a whole.

“I couldn’t find words to explain how happy I am to join my family and be able to finish my degree,” Isweiri said. “I received a lot of support from the campus and I felt like I became a celebrity, people were welcoming me everywhere.”

Isweiri said on her first day back she spent hours responding to emails welcoming her back, many from people she never met. One woman gave Isweiri handmade pillowcases for her four children.

“It’s a beautiful feeling to feel like you are welcome, like it’s not just a word,” Isweiri said.

The event was coordinated between Tony Frank’s office and Tawfik Aboellail, a CSU associate professor of anatomic pathology and president of the Islamic Center of Fort Colllins, and Eric Ishiwata, an associate professor in ethnic studies. CSU alumna Michelle Skeens and T’Hani Holt, a senior social work major with a minor is ethnic studies, also helped coordinate the visit.

Aboellail said he felt the event was important to coordinate at this time because students are facing difficulties that the CSU administration should be aware of by having a personal relationship with the community.

“I knew Tony Frank wouldn’t miss such an opportunity to come out and get introduced on a personal level to our CSU community in the Islamic Center of Fort Collins,” Aboellail said.

Questions for the administration were answered outside in the sunshine over plates of homemade food rather than in a forum.  Aboellail said this made for a more personal experience between community members.

“We want everyone who’s on our campus to feel safe and feel welcome here, it was about reinforcing those ideas,” Frank said.

“It’s a climate right now where some of our other students think they can say things that are actually harmful,” Sisneros said.

The three talked about how many of these harmful interactions between students are reflections of ignorance – ignorance that can be fixed by personal interactions. The three added that many students want to help marginalized communities, but are not always aware of the resources on campus.

“I think all too often this kind of thing happens and people want to focus on politics. The focus isn’t on politics, it’s on humanity,” Ontiveros said.

The Islamic Center of Fort Collins is planning to hold an open house for the Fort Collins community, which will be announced soon.