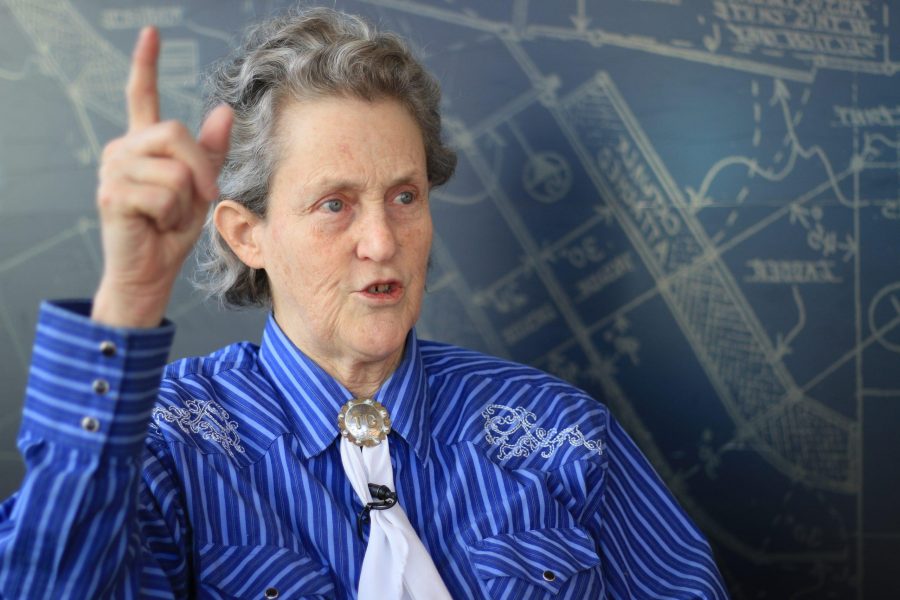 Temple Grandin's achievements have earned her a place in the National Women’s Hall of Fame. The prestigious organization will officially induct her in September 2017. (Chapman Croskell | Collegian)

The animal science expert’s achievements have earned her a place in the National Women’s Hall of Fame. The prestigious organization will officially induct her in September 2017.

“I’m really honored, and there’s a lot of other pioneers there,” Grandin said. “You know, being a pioneer, lots of times, is not easy.”

According to the National Women’s Hall of Fame, the Hall was established in 1969 in Seneca Falls, New York to house the contributions of distinguished American women. Seneca Falls, where the first Women’s Rights Convention was held, is the birthplace of the American Women’s Rights Movement. The Hall’s mission statement is “Showcasing great women…Inspiring all!”

Grandin revolutionized the meat production industry with her designs for effective and ethical animal handling practices.

Early in her career, Grandin said she thought she could fix everything by engineering better facilities, but she soon found that making improvements to a meat packing plant’s management is equally important.

In 1999, she introduced a scoring tool to access the quality of meat packing plants’ killing and handling of livestock. Meat producers had to meet what she calls “traffic rules” of the plant. She trained plants for McDonald’s, Wendy’s and Burger King on the scoring tool.

“If you didn’t shoot 95 percent of the cattle dead on the first shot, you failed the audit,” Grandin said. “If you had more than three cattle out of a hundred mooing and bellering when you were handling them, you failed the audit. It was outcome based and simple numbers. And that really worked.”

In addition to her work as a proponent of farm animal welfare, she has made contributions to the treatment of children with autism. Grandin was diagnosed with Autism when she was two-years-old. She explained that autism is a spectrum that affects many people in different ways.

“Autism varies from Einstein to Steve Jobs to Thomas Edison to half the programmers in Silicon Valley to famous artists to someone who can’t dress themselves,” Grandin said.

She said the important thing for educators and parents to do is develop the area of strength for people with Autism.

Grandin said people commonly ask her if she would choose not to be Autistic if she could make that choice.

“Autism is an important part of who I am, but it’s not my main identity,” Grandin said. “Being a college professor, a researcher, a designer – my career is my identity. I want to see kids that are different – who might have a mild autism diagnosis, ADHD, some kind of learning problem, dyslexia – I want to see those quirky kinds of different kids get out there and be successful.”

The cattle production industry was male dominant when she began her work in the 1970s. She was the first woman to milk cows at the Arizona State University dairy farm.

“They didn’t even have a ladies’ room, I had to use the men’s room,” Grandin said.

She said that while there are many women working in the meat industry today, women were only found in the secretary’s office when she started.

“Being a woman in a man’s industry in the early 70s was not easy,” Grandin said. “One of the things that motivated me was I wanted to prove I could do it. And, a woman had to be better than a guy.”

Grandin fought to make her mark among the cowboys that harassed her. In one instance, a plant’s cowboy foreman put bull testicles on her car.

“People who are suing for sex discrimination now is nothing compared to some of the stuff I’ve been through,” Grandin said. “See, I’d get hired by the manager, and (the lower management) didn’t like this nerd girl coming in on their turf, and that’s where I had a lot of the trouble.”

She wants to see kids with Autism Spectrum Disorder find careers they can be satisfied and successful in. She also wants to see them make real world change.

“I’m concerned that students today are too abstract,” she said. “They’re growing up in a world where they’ve never done anything practical.”

Grandin recalled ruining a sewing project when she was in high school, because she cut the fabric and too hastily and made a mistake.

“I learned that you’ve got to be more careful,” Grandin said. “The practical world doesn’t always work. And, if you haven’t done things in the practical world, you have really unrealistic expectations about things being perfect and it’s never going to be perfect. We can work on making it better.”

She insisted that students get career-relevant internships. Her mother set up her first two internships for her. Grandin said that internships allow students to discover their interests.

“One of my students had no experience with cattle – got out here and found out she loved cattle, but you don’t know until you get exposed to them,” she said.

Grandin recommended students look at the websites of the departments and try new things while in school.

Collegian reporter and CTV anchor Willis Scott can be reached at news@collegian.com or on Twitter @willisscottnews.