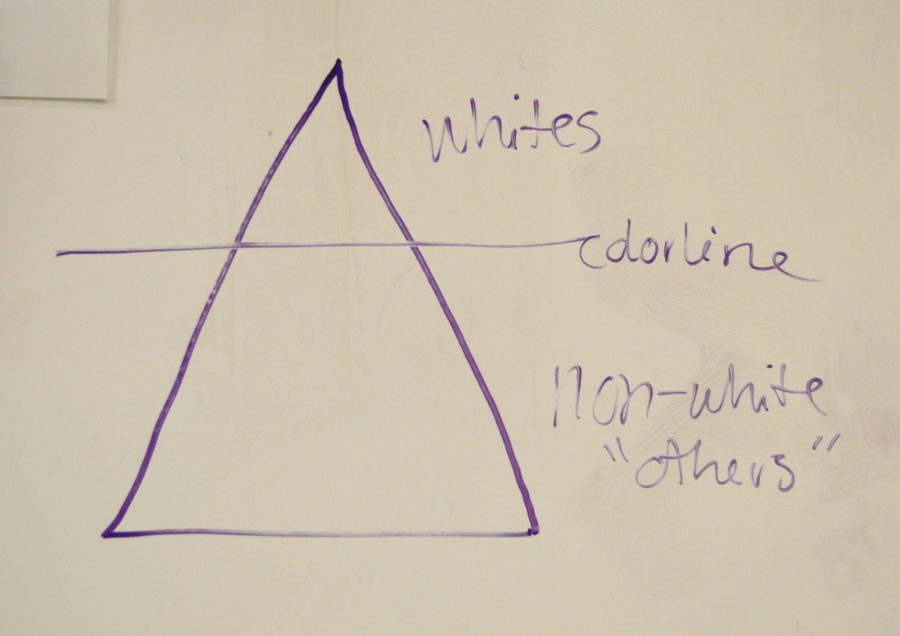 Triangle of racism exemplified at SLiCE's Social Justice Conversation regarding the topic of White Supremacy.

The Colorado State University Intersectional Activism Network partnered with a number of CSU clubs to host the first Social Justice Conversation event of the semester on Wednesday from 5 p.m. – 7 p.m. in the SLiCE office.

The SLiCE Social Justice Conversations are a series of events continuing throughout the upcoming semester. These events are open to CSU students and will cover a variety of topics ranging from feminism to homelessness.

Wednesday’s topic was about white supremacy.

The goal was to “empower ourselves to disrupt white supremacy in our daily lives,” according to their Facebook page.

Within the two hours, around 20 guests, including both students and alumni, were separated into three groups. The hosts presented a series of questions involving white supremacy to be discussed in the small groups.

Guests discussed topics such as what they believed white supremacy is, as well as how they can perpetuate and resist it. One area of focus within the conversations was how ignoring the issues of white supremacy has helped perpetuate the problem.

The speakers defined different terms within the topic. Racism was described as a culmination of prejudice, discrimination and power. Many guests agreed that topics such as these need to be talked about, as often times students are not taught about them in school.

“White supremacy is an unnamed political system that has made the modern world what it is today,” according to a writing by Charles W. Mills called the Racial Contract.

Tom Cavanagh, Ph.D., a professor in the Department of Ethnic Studies at Colorado State, was among these members. Cavanagh has previously worked with indigenous people from different regions. He has participated in a lot of fieldwork, however he now focuses most his attention on his teaching.

“I think it’s good,” said Cavanagh regarding the effects the election has had on these types of discussions. “Conversations have been more out there since the election.”

“Our culture is one entirely built off of white supremacy in every aspect,” Turner said. “This election has made people undeniably face this fact.”

When talking about important issues such as racism, Cavanagh believes the best thing people can do is to get out of their comfort zone. The leaders of the event pointed out at the beginning that there should be a feeling of discomfort during conversations like these.

“Get out of your bubble,” Cavanagh said. “Have conversations with people you wouldn’t usually talk with.”

While there were CSU students and alumni from a variety of different majors, several guests were Ethnic Studies majors or minors.

“The Ethnic Studies department here at CSU is relatively new,” Cavanagh said. “We want to let people know that this department is here.”

The CSU Ethnic Studies department is located on the second floor of Williard O. Eddy Hall in room 202.

The Social Justice Conversations are held in room 212 of the Lory Student Center from 12:30 p.m. – 2:30 p.m. on Tuesdays and 5 p.m. – 7 p.m. on Wednesdays. Different topics will be discussed during each session, and they are open to anyone who is interested.