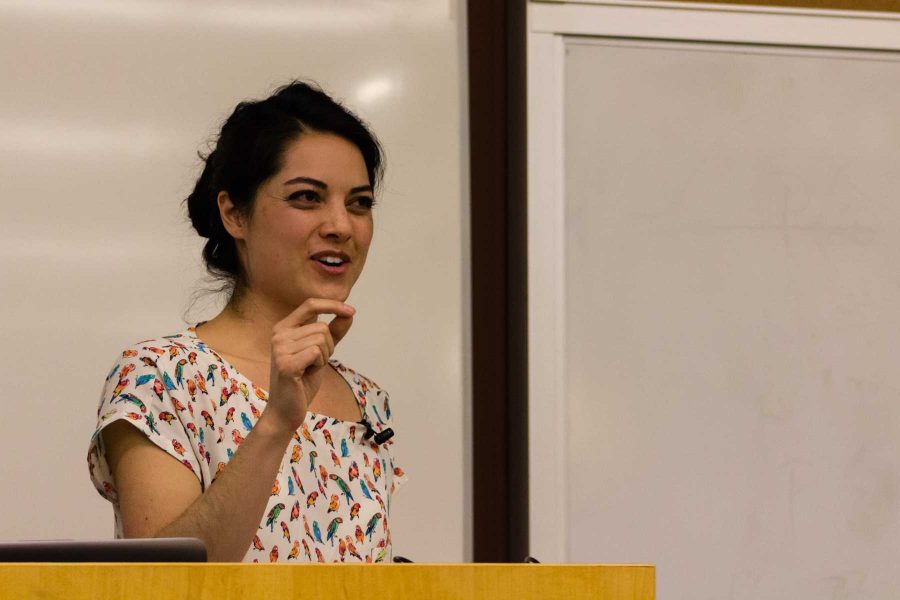 Dr. Cori Wong, a ethnics studies at the Center for Women’s Studies and Gender Research at Colorado State University, discusses the constraints of oppression during her talk on Feb 6. (David Johnson | Collegian)

Colorado State University ethnic studies instructor, special assistant to CSU president Tony Frank and director of the Women and Gender Collaborative Cori Wong spoke about the philosophy of freedom and the urgency of fighting oppression on Feb. 16.

Wong, who holds a Ph.D. in Women’s Studies and Philosophy, spoke as part of Colorado State University’s Ethics Colloquium. Using her knowledge of existentialist and feminist philosophy along with ideas from the feminist theorist Simone de Beauvoir Wong addressed the everyday ethics involved with individual freedom, privilege and the fight against oppression in any form.

Wong told the audience that everyone at CSU is involved with the fight against oppression, regardless of job title or major. She stressed that when it comes to oppression and violence not actively opposing it is supporting it, even if only through ignorance, negligence, complacency or apathy.

“Our choices have political consequences, whether or not we intend for those consequences,” Wong said. “In other words, no one gets off the hook, ever.”

One is either working to advance opportunities for others or not, Wong said. She said that while most people do not work to shut down others’ opportunities, people are likely to hoard opportunities from others who are less privileged.

While the privileged do not need a revolution to have their opportunities, they have a moral obligation, as does everyone, to join the fight against oppression, Wong explained. Wong also said she believes it is important to realize our interconnectedness because the freedom to act can allow for, impinge upon or deny the freedom of others. It allows for oppression to both exist and to be dismantled.

’’It is other men who open the future to me, it is they who, setting up the world of tomorrow, define my future,” Wong read from Beauvoir’s book, The Ethics of Ambiguity. “But if, instead of allowing me to participate in this constructive movement … they keep me below the level which they have conquered and on the basis of which new conquests will be achieved, then they are cutting me off from the future, they are changing me into a thing.”

“(Oppressed people’s) lives are confined and shaped by forces and barriers which are not accidental or occasional and hence avoidable,” Wong said. “They are systematically related to each other … it is the experience of being caged in: all avenues in every direction are blocked or booby trapped.”

The solution, Wong explained, is to resist against the oppressors and their allies.

“In the face of oppression, resistance is required,” Wong said. “Complicity is in this case tyranny.”

In return oppressors will respond to resistance by saying they are being oppressed, Wong said. She explained through Beauvoir’s writings that people must only respect freedom when it is intended for freedom, but it must be denied when its only purpose is to deny the freedom of others for the sake of advancing an individual. The recognition of other’s freedom is not oppression, Wong said.

Wong continued reading Beauvoir, who wrote that while educating oppressors to denounce their ways seems to be the only moral route they will not do so and will instead continue them and deny oppression. Therefore Beauvoir concluded that by calling for freedom over oppressors’ rejection of facts, ethics demands their suppression.

In doing so Wong explained that objectification and violence is inevitable.

“‘Since (oppressors’) subjectivity, by definition, escapes our control it will be possible to act only on their objective presence; others will here have to be treated like things, with violence,'” Wong read from Beauvoir.

Wong concluded with a quote from Beauvoir emphasizing that there is hope.

“‘The fact remains that we are absolutely free today if we choose to will our existence in its finiteness, a finiteness which is open on the infinite,'” Wong read from Beauvoir’s book. “‘And in fact, any man who has known real loves, real revolts, real desires and real will knows quite well that he has no need of any outside guarantee to be sure of his goals; (certainty) comes from his own drive.'”