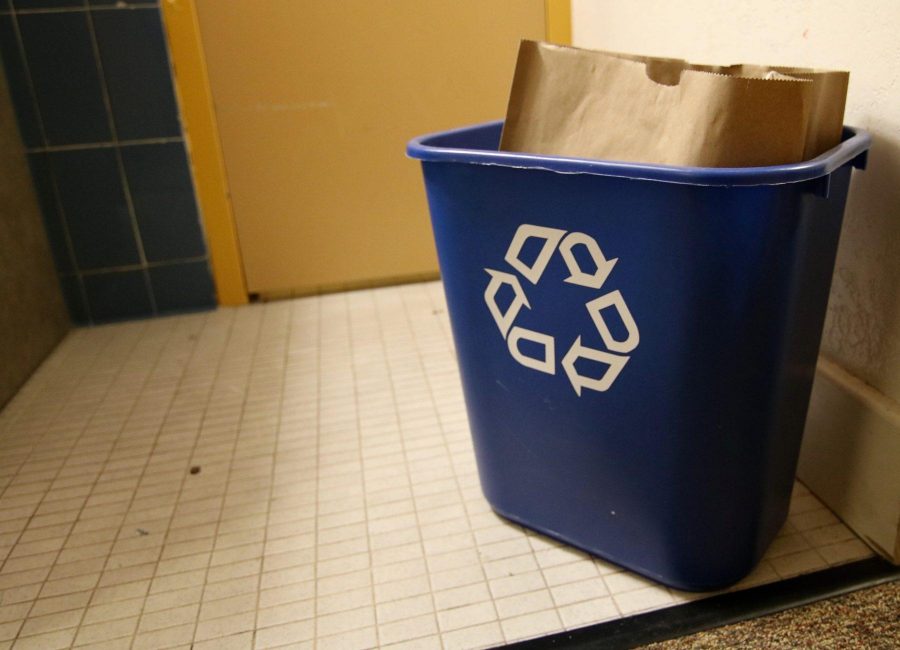 A paper bag sits in a recycling bin in Braiden Hall after CSU switched over to paper bags for recycling rather than plastic. (Joe Oakman | Collegian)

The student-driven need for recyclable bags began about two years ago as a pilot program in Summit Hall, and began its campus-wide integration at the beginning of spring semester 2017. The bags themselves are made of recycled materials and are Rainforest Alliance Certified.

According to some sources, recycling centers do not rip open plastic bags filled with recyclables due to the speed at which they must process material, and simply throw the bags out; some centers find that plastic bags gum up their machinery.

“We audited the recycling during last year’s waste audit as an individual stream and audited by weight the amount of materials that were in plastic bags, so we know 20 percent of the recycling stream was covered with contaminants because of plastic bags,” Broderick said.

Based on research done by the CSU Eco Leader piloting the program in Summit Hall, the executive boards of the Residence Hall Association and the National Residence Hall Honorary voted to support bringing paper bags to all the halls. According to Broderick, the student-driven demand for paper bags helped move the project forward.

Kait Evensen, the student who brought the paper bag issue up to the RHA and NRHH, is a member of the RHA executive board and said she has seen a positive impact of implementing the recyclable bags campus-wide.

“As a student leader, and especially within the Community Desk Staff Member role, it has allowed for conversations about recycling practices to be opened up in the halls,” Evensen said.

Using brown paper bags over plastic trash bags now may spread campus wide, with the goal to remove barriers to effective recycling. The University of Colorado Boulder had implemented paper bags successfully campus-wide, and CSU was modeling after them when they began developing the program, according to Broderick.

The waste audit on March 8 will give more insight to how well the program is actually working in terms of reducing waste that contaminates recycling. Waste from Parmelee and Corbett halls will be dumped out in the Plaza to be sorted and counted during the recycling stream audit.

“Our hope is that by implementing this program, that almost overnight, we have increased recycling by 20 percent,” Broderick said.

One reason the implementation was rushed for spring semester was to increase the success of RecycleMania, a yearly sustainability initiative by Housing and Dining services. The competition is inter-university, however, CSU has a sub-competition where residence halls and departments compete against each other in terms of cumulative per capita recycling. This is another way to engage at this time period while blasting information to people about recycling.

Additionally, the bags are a featured item to be sorted in the recycling game attached to RecycleMania. The game is one of the main education tools of the program and was played over 200 times during the first week of it being launched from Feb. 5 to April 1st.

The residential community so far has responded well to the bags.

“So far we have heard nothing but positive things feedback,” Broderick said.