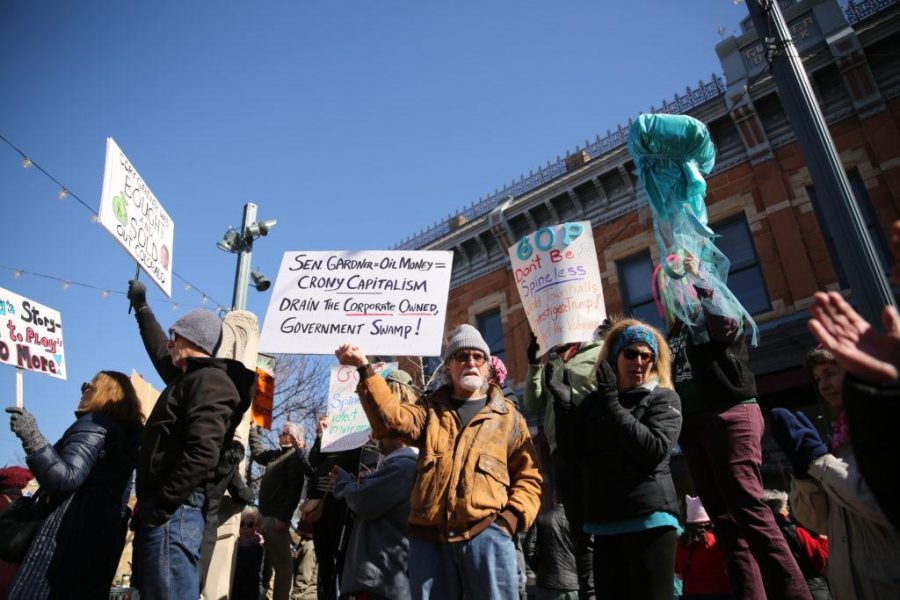 Fort Collins community members voiced their concerns over Sen. Cory Gardner’s lack of representation and unwillingness to talk with his community in Old Town Square on Sunday afternoon.

Nearly 500 people attended the event hosted by Fort Collins for Progress, according to the number of signatures on petitions passed around during the rally.

According to Fort Collins for Progress’s Membership Services and Outreach Chair, Andrew Bondi, the rally did not want to highlight issues with Cory Gardner but the lack of representation in the electoral system as a whole.

“It’s so much money for just how broken the system is that (political candidates) end up having to take large quantities of money from various interest groups,” Bondi said. “At the end of the day are they going to represent me, who donated a couple hundred dollars to their campaign, or this interest group that donated a million dollars or such to them?”

Speakers repeated, “I am not a paid activist” before they started their speeches and numerous participants carried signs that read, “not a paid protester.”

Organizers also placed a chair on the stage for Gardner to sit to symbolize how Gardner has not appeared at recent town hall meetings.

Though the rally highlighted issues the Fort Collins community has with Gardner, speakers talked about some of the positive things he has done, such as vocalizing his opposition to President Donald Trump’s travel ban.

Tawfik Aboellail, President of the Islamic Center of Fort Collins, spoke about Gardener’s stance to President Donald Trump’s travel ban and the importance of elected officials representing their constituents.

“In this darkest hour we have seen a glimpse of hope when Senator Gardner came and said, ‘we need to fix this ban,'” Aboellail said. “I want to tell those elected officials … we the people are watching and we will hold you accountable because, at the end, we the people will prevail. In two years or less we are going to remove you from office or keep you in office.”

Aboellail said the community and the nation will continue to persist against the local and federal government if they do not agree with their elected officials.

“Together we are powerful. Together we will dictate how this great nation will go forward,” Aboellail said. “Colorado will remain colorful. The United States will remain united. We are all citizens and we will determine how this country and how this ship will navigate these turbulent waters.”

In addition to speakers the Foothills Unitarian Church performed a few songs in English, Arabic and Spanish. Bondi also asked the crowd to participate in a moment of silence for two engineering students from India who were shot by a man in Kansas on Thursday evening.

“This is truly one of those moments where our actions speak louder than words,” Bondi said following the moment of silence.

Mayor candidate Elizabeth Hudetz said she volunteered at the rally because she is passionate about listening to issues that are important to members of the community.

“Only by joining together can we be a grassroots movement,” Hudetz said. “The mayors are more in touch with their constituents than any other level of government. Clearly our new government is not reachable (and) not even our state officials are available.”

The rally ended with the introduction of the local Represent.Us chapter and a call to action to get the American Anti-Corruption Act passed in Fort Collins.