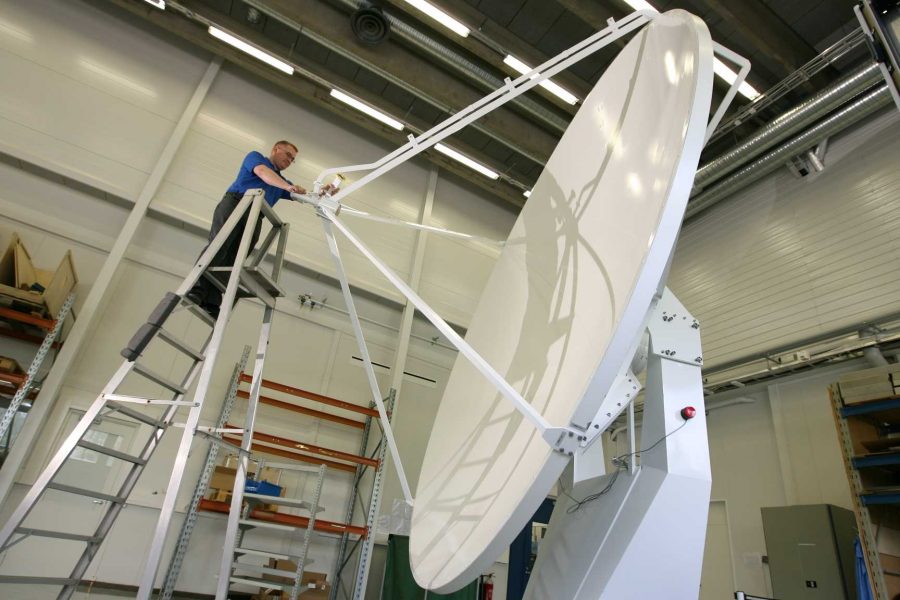 One of Vaisala's C-band radars (Photo courtesy of Brandon Reid).

Vaisala is a company who manufactures environmental and industrial measurement equipment and has been working with CSU to configure a C-band radar specifically for the university. The C-band radar will be used by the College of Engineering, Department of Electrical and Computer Engineering and the Department of Atmospheric Sciences, according to Scott Sternberg, president of Vaisala in the U.S. The C-band radar will allow scientists and researchers to determine the type of precipitation in the atmosphere and predict severe weather.

“We highly respect the efforts and achievements of CSU´s faculty and students,” wrote Vaisala CEO Kjell Forsén in a press release. “(We) are pleased to contribute a C-band weather radar to support the world-class research going on there, taking the art of weather radars into yet unseen levels of performance and significance.”

The C-band radar is smaller than other radar equipment, which allows it to be transported around the country or the world.

“The radar can travel with us to international areas where we haven’t been able to bring radars to before, opening important possibilities to measure weather-related phenomena in new locations,” wrote CSU electrical and computer engineering professor V. Chandrasekar. “It’s an exciting opportunity to teach our students and further our research.”

Weather radar equipment like the C-band radar consists of a parabolic dish that spins around and sends waves into the atmosphere. The waves, which travel at the speed of light, bounce off of hydro meteorites such as ice or water particles and travel back to the dish. The radar equipment uses the signals to measure the amount of such particles in the air.

Unlike some other weather radar equipment, the C-band radar uses dual polarization, which splits the signal sent out into the atmosphere into a horizontal wave and a vertical wave. This allows scientists and researchers to better determine the type of particles in the air, water droplets or snow or ice particles.

“The idea is that a water droplet falling squishes out like a pancake, so if you bounce a horizontal radar wave off it you get a strong signal. If you bounce a vertical wave you get a weaker signal,” Sternberg said. “But a snow particle is more like a little snowball so you get an equal response.”

According to Sternberg, Vaisala and CSU have a long history of collaboration in furthering and promoting scientific research. An example is their support of CO-LABS, a non-profit organization that promotes the importance of basic science and federally funded research laboratories in Colorado. Sternberg currently sits as chair and CSU vice president for research, Alan Rudolph is also on the board. Vaisala also conducts an internship program for CSU students in Louisville and according to Sternberg, 10 percent of Vaisala’s workforce are CSU alumni, including Sternberg himself.

He and Vaisala hope that donating the C-band radar to CSU will give students access to a piece of equipment they wouldn’t have normally had access to as well as provide future opportunities.

“Our wish is not just to give CSU a piece of hardware, it’s to give CSU an instrument that will be critical in a number of research projects going forward in the future,” Sternberg said.