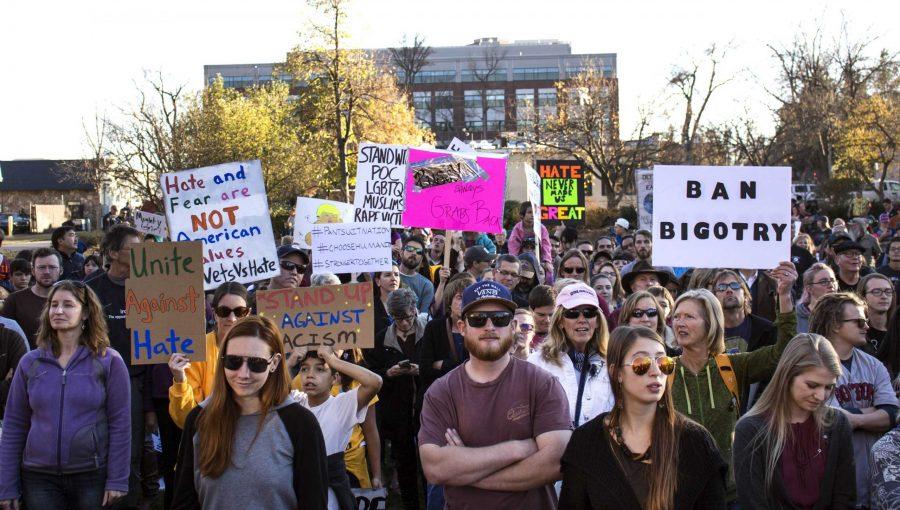 Hundreds gathered for peaceful protest in light of the recent presidential election at Civic Center Park for the Peace and Solidarity Rally hosted by Fort Collins for Progress.

Jan. 31: Marching in Solidarity with Our Immigrant and Muslim Neighbors

About: Organized by Fort Collins for Progress, the event is to support the Muslim community in light of the recent Trump immigration ban. The event description also states that they will send a small delegation to Cory Gardner’s office.

About: The event, hosted by Denver peace activist Queen Phoenix, which is organized to show support the Muslim community. According to the Facebook event page, it will be a peaceful and family friendly event. Currently, 5,312 people say they will be attending and 17,237 are interested. Due to the size of people estimated going, the rally will begin at the Greek Amphitheater at Civic Center Park.

About: The event was organized to support Planned Parenthood. A total of 277 are planning on attending, with 2,370 people interested.

About: The rally is to oppose the Planned Parenthood protests, and is to take place around the country on Feb. 11. The rally will march to Sen. Cory Gardner’s office and a statement will be read to urge Gardner to halt any action to defund Planned Parenthood.

Feb. 18: To Immigrants with Love

About: The event is organized by Dreamers United, a student organization at Colorado State University that aims to create a safe environment for DACA and ASSET students on campus. According to the Facebook event, it is a letter writing campaign “for immigrants and the allies who love them to publicly acknowledge that we are standing with immigrants no matter what.”

About: The event is hosted by One Billion Rising, a organization that campaigns to end violence against women worldwide.

“We rise to show we are determined to create a new kind of consciousness – one where violence will be resisted until it is unthinkable,” the organizers wrote in the description of the Facebook event.

About: According to an article in The New York Times, a top aide said Donald Trump will not release his tax returns. The march is organized to get Trump to release his tax returns by April 16. The event has a GoFundMe campaign in order for fund details of the march such as a public assembly permit. The permit will allow them to take the same march route as the women’s march, which took place earlier in January. Currently, the campaign has raised $4,871 of a $25,000 goal.

About: Taking place on Earth Day, the march is organized to show support of protecting the environment. The concern stems from climate change section on the White House disappeared, and over Trump’s rhetoric on cutting participation in the Paris Climate Agreement.

“It is clear that now, more than ever, we the people must protect the environment ourselves, since our government refuses,” the organizers wrote, on the Facebook event description.

Collegian News Editor can be reached at news@collegian.com or on Twitter @sbodine120.