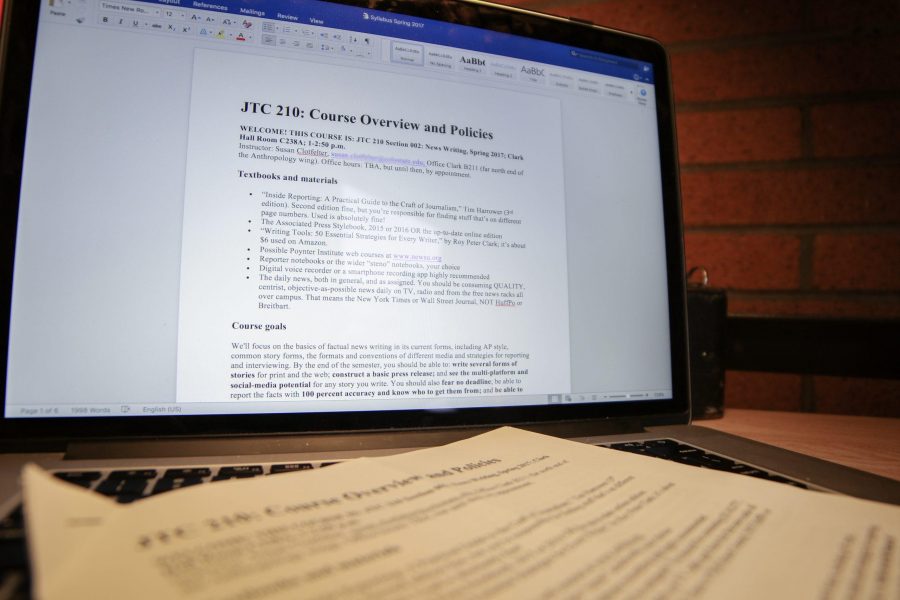 ASCSU asked all teachers to switch to a greener and more cost effective approach to their syllabi by only offering online versions. Some teachers and students still prefer hard copies. (Photo by Kasen Schamaun | Collegian)

Students may not have received a paper copy of their syllabi at the start of the term.

Associated Students of Colorado State University prompted campus faculty not to print their syllabi, advocating for a greener campus and stating that students do not use the paper copies beyond the first day.

“I got an email directly from a student representative of student government. To my knowledge, it was sent to all the university faculty,” said Hutchins.

Tyler Siri, director of academics for ASCSU, said it was his idea originally.

“(ASCSU) sent it out as an email to all of the department chairs (at the end of last semester) … to decide if they would send it out to their faculty members,” Siri said. “Different departments have different needs. A lot of departments don’t have the bigger classes which are the problem (because they’re printing out hundreds of copies).”

Siri said he reached out to different student groups and people around campus to see if they actually use paper syllabi. He worked inside ASCSU to figure out the exact language to present to faculty to gauge the reaction.

The idea was proposed to faculty council for ASCSU before it went through to the senate. Siri said a resolution was decided on in place of enacting a policy change, which he described as an uphill battle with little reward.

“I don’t know if push back (against the idea of online syllabi) is the right word. Dismay might be a better characterization,” said Hutchins. “First of all, I don’t think students (in my classroom) had any idea that ASCSU had adopted this policy. From verbal reactions and the downcast looks about the room, it became pretty apparent that (my students) were missing the paper syllabi.”

Siri said the recommendation from students, as opposed to an official policy, aligns with students and ASCSU’s vision of the university – to be more sustainable.

“We felt it was a beneficial recommendation,” Siri said. “(We) want to cut down on the mass amount of printing.”

Hutchins expressed his desire to use resources responsibly.

“I don’t dream of slaughtering trees myself,” said Hutchins.

He explained the necessity of paper syllabi within the English department.

“I can imagine that there are classes where a syllabi might less detailed than the ones that I tend to put together,” Hutchins said. “Students are probably less likely (to read the syllabi carefully) if it’s not provided to them.”

Siri said print syllabi are used as a contract, so that students understand what the class entails going into it.

“For the majority of classes, that’s not exactly necessary. Most faculty members are perfectly capable of doing it online,” Siri said.

An online syllabus allows faculty flexibility with the course schedule, as they can choose not to include solid dates for assignments or exams, according to Siri.

“Periodically throughout the semester, I’ll ask students to refer to the syllabi and it’s been my experience students pull them out of their folders – (the syllabi) are annotated or they have underlined or highlighted things,” Hutchins said. “I don’t think there are many instances in which students just toss the syllabus without devoting the attention to it.”

Siri said in talking with members of ASCSU there has been a strong acceptance of the recommendation from professors. ASCSU has yet to receive direct feedback from any students outside the organization.

Hutchins, after the response of his first class during the first Wednesday of the semester, printed out paper copies of the syllabus for his next class that day.

“They’re really valuable course documents,” Hutchins said. “It’s the sort of thing that you want to have a paper copy of.”