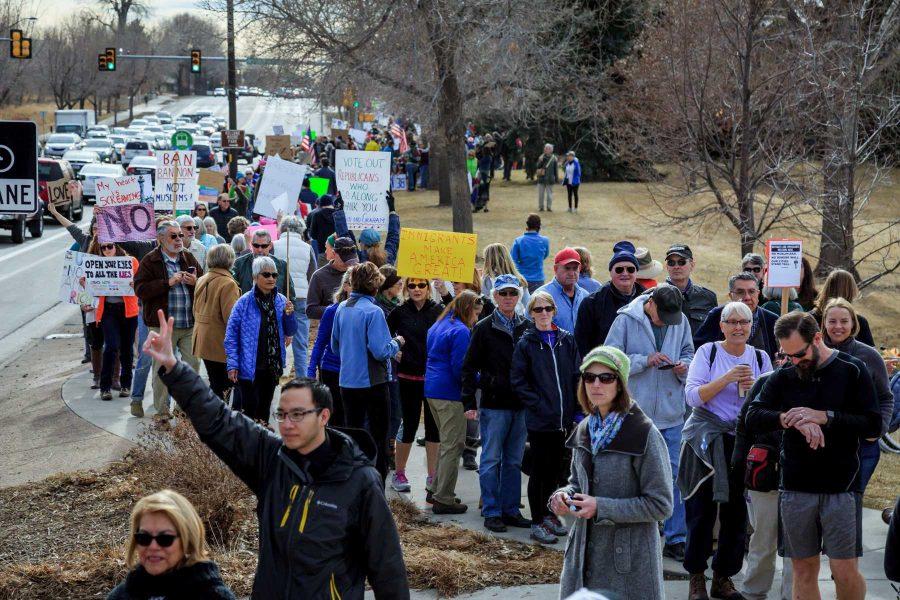 In a show of solidarity for immigrants and Muslim American communities nearly 2,000 Fort Collins residents of all ages marched up and down the sidewalks of Shields Street Tuesday in response to President Donald Trump’s recent executive orders.

Although the rally took place for only 45 minutes in the middle of the workday and workweek grandparents, young families, CSU students, high school students and children gathered at Rolland Moore Park at noon to demand stronger stances against Trump from their local representatives.

“I’m here for this protest because we have a history of genocidal violence based on racism and it’s not something I’m willing to tolerate in my America,” said Ariel Armelino, a Fort Collins resident, in between cries of “immigrants are welcome here,” and supportive honks from passing cars.

The protest was organized by Fort Collins for Progress, a local organization that formed during the election season in response to Trump’s campaign. The organization collected over 1,000 signatures online and in person for a petition to deliver to Colorado representatives.

“(Gardner) has publicly said that the people calling him are paid protesters so we wanted to let him know that we’re not paid protesters, we’re people rallying in support of our neighbors,” Stringer said.

Harvey, 5, is here today with his mother and sister. Lots of Fort Collins families are marching today. @CSUCollegian pic.twitter.com/8wCNxKf8oX

The rally was intended to be a show of solidarity for immigrants and Muslim Americans who have been affected by the President’s executive actions in the past week. Participants carried signs such as, “build bridges not walls,” and “everyone is welcome here.”

The rally was much larger than anticipated – on the Facebook event page about 700 people said they would attend, with several people posting that they could not attend due to work or school commitments. However that did not seem to stop several Poudre High School Students who left their algebra class, with their teacher’s permission, to protest.

“As a Muslim girl I feel like this is not right at all. We have choice of religion and (Donald Trump) is kind of taking those away from us,” said Hannah Elghoul, a high school Muslim American student. “… People look at me differently sometimes – they think I don’t speak English or that I don’t understand as much as them – so that hurts. But the support here feels so amazing. It absolutely fills me with joy to see that our community supports each other.”

The executive actions have left some Fort Collins residents trapped abroad who have visas or green cards. Recently CSU President Tony Frank announced in a campus-wide email that three CSU students have been “hung up” in their travels upon attempting to return to the U.S. after visiting family.

“What has happened this past week is not acceptable,” said Hadeel Abdel-Ghany, a CSU student who identifies as Muslim-American. “I don’t think they (politicians) realize the extent of the impact this has on people.”

Abdel-Ghany said that she knows people who are currently stuck in airports because they are not allowed to go to their home country and are not allowed to go back to the United States. She said she knows others who are unsure if they will ever be able to see their families in their home countries again because they have to stay here with their visas or risk not being allowed back into the United States.

“I’m going to be one of the first people to tell you that we need to stop radicalism and we need to stop terrorism because it’s something that affects Muslims personally,” Abdel-Ghany said. “The largest impact of ISIS is on Muslims. This is a thing we need to address but this is not the way to do it.”

Abdel-Ghany has lived in Fort Collins her entire life, since she was a month old. Her parents emigrated from Egypt and her brother is a United States citizen since he was born here a few years later. She is studying to become a teacher at CSU because she said she wants to give back to the community that has given so much to her.

“I’m here speaking out because this personally affects me,” Abdel-Ghany said. “I’m a green card holder and my application was put on hold because of this. I don’t know if I can leave the country or what I can do. It’s terrifying. They don’t realize that real people in this community are being affected.”

The demonstration took up about four blocks of Shields Street and lasted for about an hour. The demonstration was peaceful and there were no signs of counter protesters or opposition to the message.