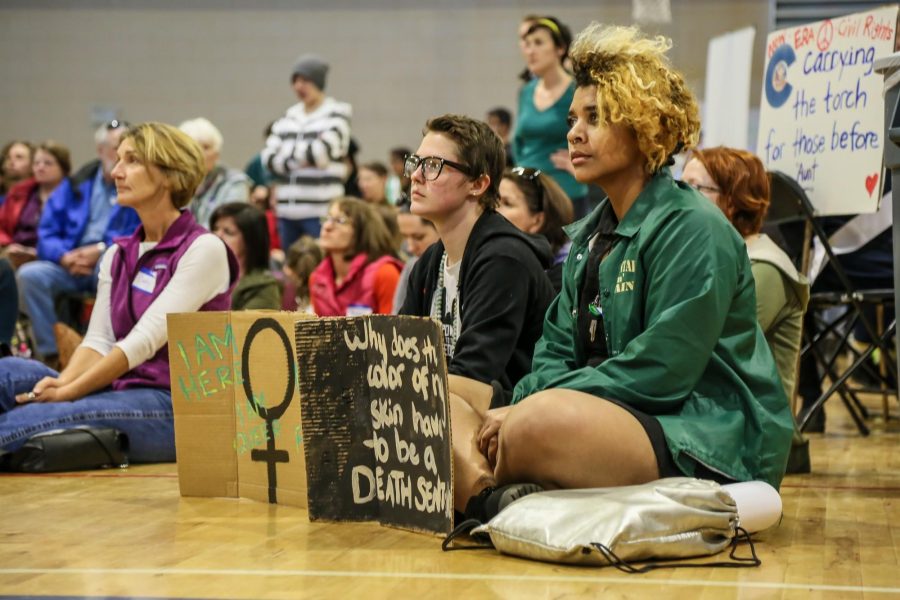 Two days after the inauguration, hundreds of students and community members in Fort Collins gathered at Rally for Our Rights, held at the Northside Aztlan Center.

The rally, put on by Fort Collins for Progress, formerly Rams Against Trump, was designed in order to keep citizens involved in political issues during the offseason, as well as to keep them engaged and inspired.

At its peak, the rally’s audience reached 200 attendees, at least. The gym ran out of chairs and a sense of community felt tangible as many gave up chairs or ensured that those who needed a chair had one.

Shortly before 1 p.m., a line queued up outside the gym, which was surprising to both the attendees and the hosts. Some carried with them signs leftover from Saturday’s Women’s March in Denver. One organizer said she did not bring enough sign up sheets for all the community members present.

“I knew this was going to be big, I didn’t bring enough sheets (to recruit more names),” said Suzanne Trask, of Organizing for Action. “We’re here getting people to know that we’re still here.”

Organizing for Action is a group that is a continuation of people who campaigned in the two previous elections for Obama. The group’s table hosted old Obama campaign signs, with “YES WE CAN” written by hand over top.

The organization has partnered with Colorado State’s School of Global and Environmental Sustainability (SOGES) to host events central to climate change, an issue Trask said holds real focus within the Fort Collins community. The most recent event, Water in our Future, took place in November.

Organizing for Action was one of about 30 groups tabling as attendees entered the gym as part of the Organization Expo, the first portion of the rally.

“We need the youth, without any doubt,” said Deb James, president-elect of Colorado’s renewed NOW chapter.

James, who will run unopposed this Tuesday for president of the NOW chapter and has worked to bring it back to Colorado, stressed the importance of the involvement of the younger female generation.

James said the group holds values similar to those of other groups and individuals present at the rally, including reproductive rights for women.

“If you come join us, you’ll feel better,” James said.

Delana Maynes, of the ACLU of Colorado, also expressed the value of involvement.

Maynes was the first speaker to open up the panel portion of the rally as the expo wound down. Reiterated was the idea that the ACLU is not just fighting for rights on the national level, but on the local level as well. Most specifically, Maynes said the group helped to stop Denver police from using social media to track the location of activists.

Following Maynes, Andrew Bondi, of Fort Collins for Progress, spoke about the purpose of the organization and how a community can make a difference.

Andy Boesenecker, of the Mustard Seed House, was the last to speak prior to the introduction of the panel. Boesnecker addressed, briefly, a variety of issues, to which the audience responded – climate change, health care, public education, rights for women, for people of color, for the LBGTQ community and for immigrants and refugees.

“Now is the time for justice. (We) are here and not going away. We need you now. Get involved – get loud,” Boesenecker said.

The crowd thinned as the panel wrapped up the rally. Questions were submitted to a table prior the panel taking the stage.

Many of the questions asked addressed similar issues the organizations tabling were there to address, such as climate change, as it related to property rights and oil and gas companies; the Affordable Care Act; funding for teachers and public education; and how to protect LGBTQ rights under the current administration.