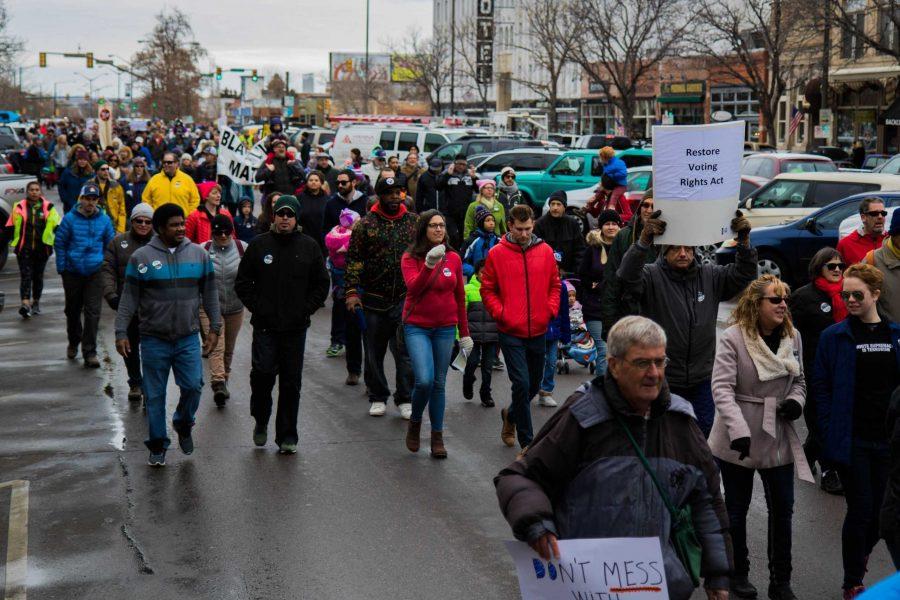 The march began in Old Town Square, where students and community members gathered for the annual march of remembrance.

While the main purpose of the march was to celebrate the accomplishments of Martin Luther King Jr., marchers also had personal reasons for participating.

Colorado State University student Frida Mugica was there with her multi-cultural sorority.

“The majority of us identify with different races and so we’re volunteering today,” Mugica said. “We’re really passionate about this kind of stuff, and a lot of us even have ethnic studies minors and majors, which is part of the department of (Dr. Ray Black).”

Dr. Black is an assistant professor of ethnic studies at CSU and the director of the department’s internship program. He was also a leader of the march Monday.

Another marcher, Susan Moore, has been part the march for decades.

Once the marchers arrived at the LSC ballroom, there was a ceremony with speeches and awards for various leaders of the movement.

One of the dignitaries of the ceremony was CSU President Dr. Tony Frank, who gave a speech about how to keep the movement going.

“When we find an issue that matters to us, we care, we’re outraged, we march. And then we don’t,” Frank said. “We don’t forget exactly, but we don’t entirely remember either. Those of us with privilege move on to other causes, other issues, other preoccupations. All those that stood in the midst of the storm with the rest of us, or viewed from the distance, also with time, typically, to find a way to cope, and a way to move on.”

Frank questioned when those with privilege would choose to act and choose not to, and challenged the community to stand for justice consistently.

Frank said that the continued existence of the march in Fort Collins year after year reflected the community’s commitment to social justice.

“In a way, all of us are saying by our presence here that we are unyielding in our expectation, that we refuse to stand silently, that we value justice more than comfort, that we will tirelessly, ceaselessly, breathlessly, work for justice in our neighborhoods, our cities, our campuses, our country, and in our lifetime. The time for justice has always been, and it remains, now.”

The commemoration ended with K-12 Fort Collins students reading their award-winning poems, and with a spoken word poem by CSU student Michelle Mendoza.