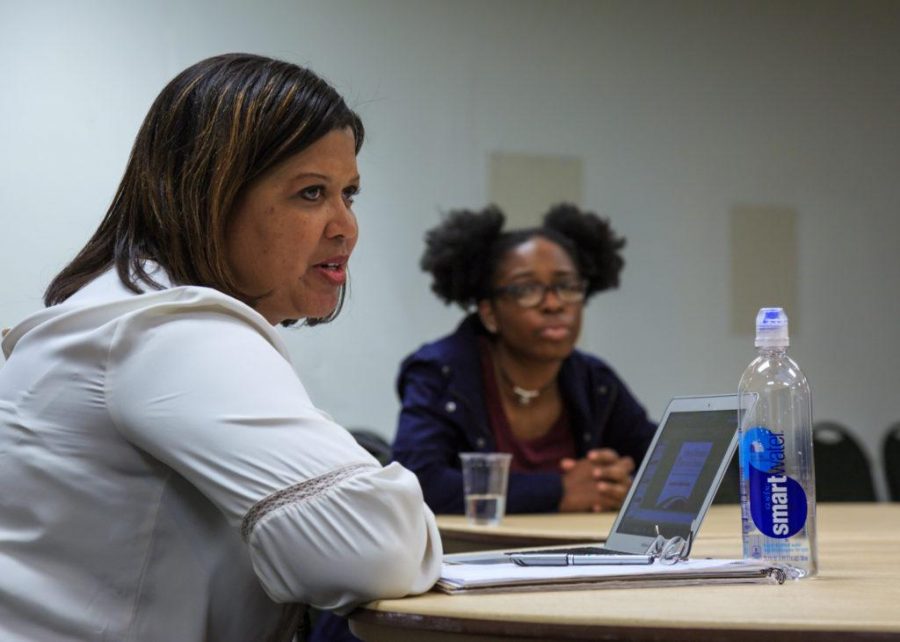 CSU guest speaker Dr. Tia Brown McNair discusses the current political and social issues that have arisen around race in the recent months. She is joined by a group of students who shared their feedback and personal experiences, January 30, 2017 (Davis Bonner | Collegian)

Dr. Tia Brown McNair, a leader in campus diversity and equality research, held a forum Monday evening to get advice from students regarding racial healing projects that she has been working on.

McNair asked for imput from students for her project, Centers for Truth, Racial Healing and Transformation. The project aimes to heal what she calls the “Hierarchy of Human Values.”

McNair is the Vice President of the Office of Diversity, Equity, Equality and Student Success at the American Association of Colleges and Universities.

In all, thirteen students were in attendance at the Lory Student Center to provide feedback to McNair.

“We are representing one sector of the Higher Education Sector (of the W.K. Kellogg Foundation), so our role and what we’ve decided to do is to take the framework of the Truth, Racial Healing, and Transformation enterprise … and to put it into practice,” McNair said.

One of the goals of the Centers is to envision what communities that have eliminated inherent segregation would look like.

“I pushed questions that we (the Center) asked ourselves, and we’ve been engaged in the work for a long time,” McNair said.

As part of the forum, McNair asked the students in attendance what they thought the theoretical community would look like, and how it could be achieved.

“I think it would be really valuable to heal and work with people similar to you on the issues, but also communicate with people different than you to work through them,” said one attendee.

Arisson Stanfield, another student in attendance, said that part of the problem that should be fixed is the constancy of the issues that they are trying to fix.

“There’s a preemptive exhaustion when you can tell there’s BS coming. There’s a lot of stepping on toes that you have to deal with every day,” he said.

“It’s one thing to have discussion than to have action,” said another student in attendance.

McNair agreed, and added that, “in order to get to that action, you have to start in that place… you start with the truth of the situation… and then you move to the healing.”

She also mentioned healing circles as a way to help get through difficulties. According to crystalinks.com, healing circles consist of “a group of like-minded people who pray together to give or receive healing or energy work.”

McNair described her experience in a healing circle as “one of the only spaces where (she) felt like (she) truly was listening.”

Another item that McNair brought up was a book published last year called, “We Gon’ Be Alright,” by Jeff Chang. The series of essays takes a look at the recent racial problems of the nation, and takes its name from Kendrick Lamar’s hit song “Alright.”

She also mentioned a documentary called “America Divided,” by “Grey’s Anatomy” creator Shonda Rhimes, and stars “Grey’s” star Jesse Williams, that takes on the issues that the Centers will be trying to combat head on. She says that it is “going to be a starting point to see our divides.”

One problem with the forum was the length, she said. The forum only lasted an hour.

“I think it’s difficult within an hour-long conversation to have something so deep without trust being established,” she said.

However, McNair still thinks that the forum went well.

“I do think that they gave some very solid recommendations on what we struggled with just as much as the students struggle with,” McNair said. “The conversation went well. (But), if we had all day, we would have talked about ‘America Divided,’ we would screened parts of it, it would have preceded the conversation.”

Collegian reporter Stuart Smith can be reached at news@collegian.com or on Twitter at @notstuartsmith.