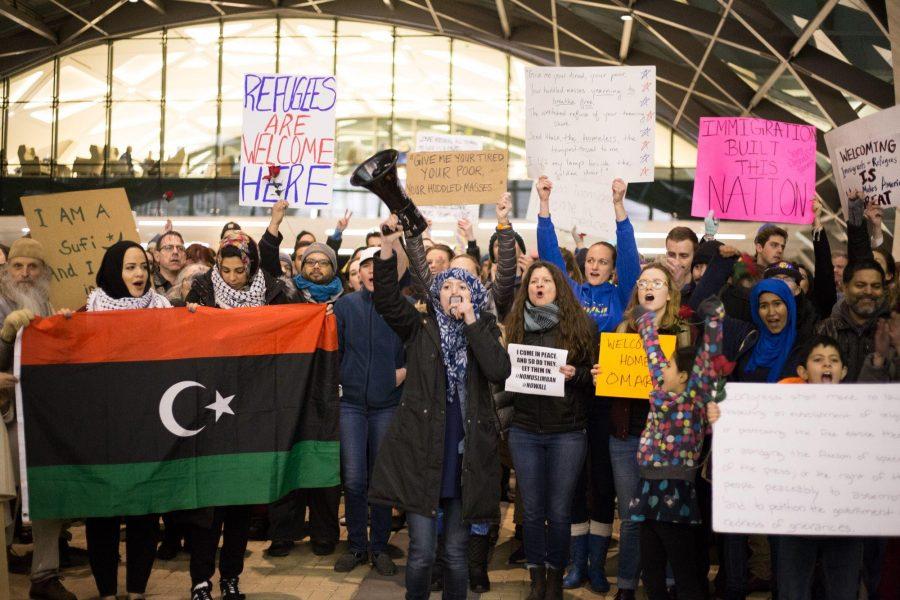 Protesters against Donald Trump's executive order banning travel to the U.S. by citizens of seven Muslim-majority countries cheer at Denver International Airport on Saturday, Jan. 28, 2017. The protest was one of several that took place nationwide. Photo courtesy of Daniel Sauve.

According to a campus-wide email sent by Colorado State University President Tony Frank, the University is monitoring the situation of three CSU students who the University knows to be “caught up in returning from their home countries to continue their studies at CSU.”

The ban is set to last 90 days and includes those with dual citizenship, as well as those who were born in any the seven countries, but who are now travelling with a passport issued by another country, the Wall Street Journal reported.

Frank wrote that the University will remain in contact with the affected students and their families, and that Student Legal Services is offering consultation with an immigration attorney.

“We are also actively engaged with our national organizations such as APLU (The Association of Public and Land-grant Universities), providing them the data needed to help make the broader case in support of all of our international, DACA , and ASSET students,” Frank wrote.

DACA refers to Deferred Action for Childhood Arrivals, a policy enacted by President Obama in 2012  that allows certain undocumented immigrants to the United States who entered the country as minors to receive a renewable two-year period of deferred action from deportation.

CSU is a member of APLU — a research, policy, and advocacy organization that includes public research universities and land-grant institutions.

The APLU organization issued a statement in response to the ban Saturday, which cited a recent estimate that there are more than 17,000 students from the seven countries targeted by the executive order who studied at American universities during the 2015-16 school year.

“With appropriate and effective vetting, international students from all countries and of all religions have long been a core part of our campus communities and that should continue uninterrupted,” the statement reads. “We are also concerned that this decision adds great uncertainty to international students, researchers, and others who might consider coming to our campuses.”

In his campus-wide email, Frank emphasized that the University will reference their roots as a land-grant university while they assess the impacts of the travel ban.

“We will not lose our focus on our foundational underpinnings as a Land Grant University: that people with the talent and motivation to earn a degree from a world-class university, regardless of their background, race, gender, social status, religion, or beliefs, deserve that opportunity; and that by providing this opportunity, we allow them to improve not simply their lives and those of their families, but – through the ripples their lives will create – to also improve and strengthen our society as a whole,” Frank wrote. “Our collective voices have great strength, and we intend to harness that strength for our students.”

A federal judge added an emergency addendum to Trump’s executive order Saturday night, granting stays to travelers with valid visas who were in transit or already arrived in the U.S. at the time of the executive order, CNN reported. However, according to the Denver Post, three people were detained at Denver International Saturday night by border patrol officers after arriving on a flight from Frankfurt, Germany.

Those detained included two married doctors from Iran on their way home to Portland, Oregon, and a mother and her infant daughter back from Syria. The Denver Post reported that they were released after about two hours, while the protest was going on in the main terminal.

Titled “Protect Our Constitution,” the event was organized in just four hours via Facebook by Heraa Hashmi, a novelist, YouTuber, and University of Colorado, Boulder student studying molecular biology. The protest was one of nine that happened at airports across the country over the weekend.

“When I got there, it was just so amazing to see people of so many different walks of life uniting for a single cause,” Hashmi said. “And that’s something that really made me cheer up the entire time I was there. I felt like, you know, I belonged; this is my community, this is the America that I stand for.”

Prior to the beginning of the protest at 5 p.m., Denver International Airport tweeted that its employees were aware of the planned gathering, but stated that the airport had regulations against public demonstrations.

“The airport is aware that some people are interested in coming to our facility tonight to protest federal actions on immigration,” the tweet read. “Please know that the airport’s rules and regulations requires (sic) a permit for any type of public demonstration. DEN respect’s (sic) the public’s right to engage in political discourse, but we also have rules that protect the safety and operations of our facility.”

DIA later tweeted that the protest had been moved to the outdoor plaza at the south end of the terminal. The move occurred after a crowd gathered in the security and baggage terminal.

Hashmi said that a permit for a gathering at the airport usually takes a week to process, but the demonstration occurred under what she termed “emergency conditions.”

Another group of protesters returned to Denver International on Sunday afternoon. Hashmi said passionate attendees of Saturday’s protest made the plans to come back Sunday.

“I felt like we ignited a spark, ignited, like, a movement, because this protest was organized by people who were there yesterday and they were like, ‘We have to continue this,’” Hashmi said. “People became so proactive.”

More protests against the travel ban are scheduled for the coming week, including at Civic Center Park, the recent site of the Women’s March on Denver.

Are you, or is someone you know, affected by the travel ban? Let us know by emailing news@collegian.com.

Collegian Editor-in-Chief Julia Rentsch can be reached at editor@collegian.com or on Twitter at @julia_rentsch.