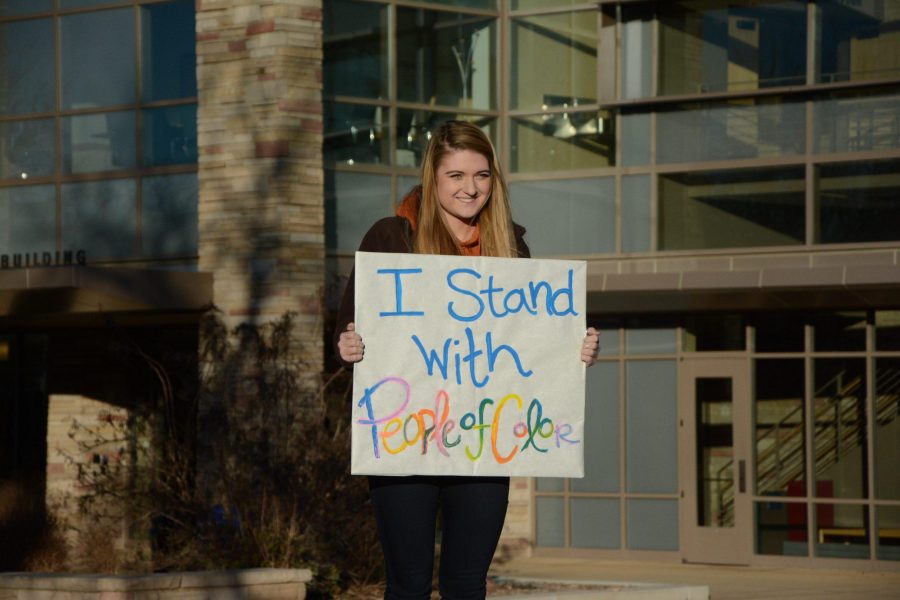 A small group of honors students gathered on the plaza Wednesday afternoon in nearly freezing temperatures to show solidarity with oppressed groups in the United States.

The students stayed on the plaza with the signs from about 2 p.m. until 4 p.m. Wednesday, but Merline said they left earlier than anticipated due to the lack of students passing through the plaza to see the signs and the temperature.

The class of about 20 students uses a textbook written by Howard Zinn, author of “A People’s History,” to learn the history of oppressed groups in the United States.

“We go through basically all the ways people have been disrespected in American history,” Merline said. “We start at Columbus, we go through slavery, the trail of tears, people of color, women, the LGBT population, just every oppressed group in the United States.”

Merline said the demonstration was part of a three-pronged action plan that the students came up with during the election season.

“Right before the election, I could tell we were all feeling the need to do something positive, because the country was being so divided by the presidential election,” Merline said. “So, my class did some brainstorming.”

The first action the class took was to write letters to senators and representatives to let them know how important human rights are, according to Merline.

The demonstration on the plaza, which Merline called a support rally, was the second action the class took. The students also plan to create a film about the demonstration.

The third action the class took was to organize a public movie showing of “Before the Flood,” for Thursday from 5 – 7 p.m. Merline said the movie about climate change will be followed with an educational discussion.

“They (the students) are all very passionate in their lives about standing with people who have been oppressed and who are oppressed in the United States,” Merline said.