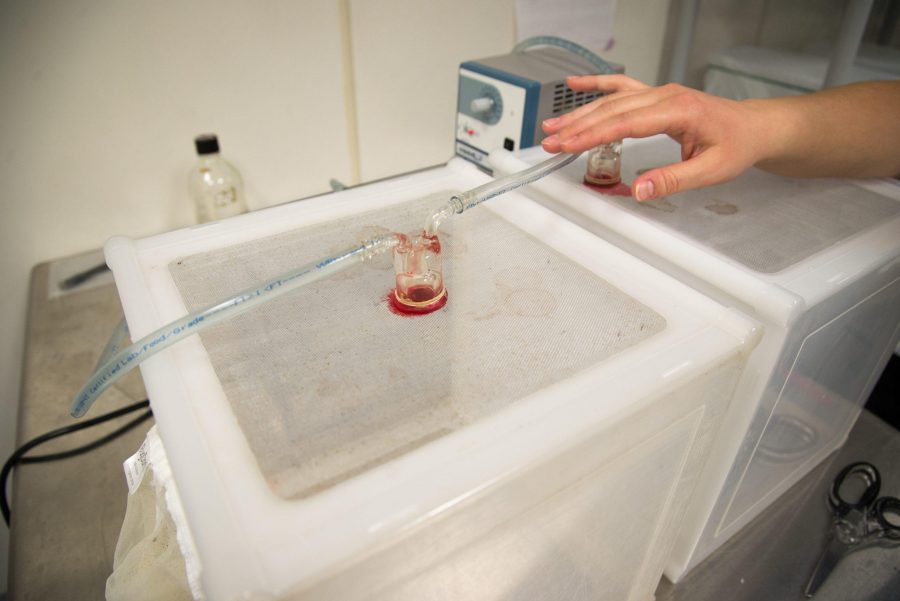 Aedes aegypti feeding tubes where Zika and other Virus would be introduced to the mosquitos at the Infectious Diseases Laboratory on Tuesday Dec 6, 2016 at Colorado State University in Fort Collins, Colo. (Luke Walker | Collegian)

Researchers at Colorado State University recently discovered that one specific type of mosquito can spread up to three different viruses with one bite, including Zika and Dengue.

CSU was among one of several institutions that received grants to study the Zika virus after the epidemic began in Central and South America and the southern coastal regions of the United States.

The Summer Olympics in Rio brought the Zika virus to the forefront of the global conscious. Yet, before the world turned its eyes toward Brazil, researchers were concerned about this arbovirus, a virus spread by mosquitoes, that caused an outbreak in April 2015.

CSU’s researchers have identified the mosquito as the Aedes aegypti mosquito that spreads this virus.

Claudia Rückert, postdoctoral fellow in the department of microbiology, immunology and pathology, learned this mosquito is capable of being infected and infecting people with multiple arboviruses. Research under her adviser Gregory Ebel, an associate professor in her department, has led her to conclude that this mosquito can spread multiple viruses with one bite: Zika, Dengue and Chikungunya. Spreading multiple viruses is referred to as coinfection.

Mosquitoes can begin transmitting these diseases anywhere from three days to two weeks after they are initially infected with the virus. The time it takes to begin spreading the virus varies based on the incubation time of the virus in the body of the mosquito. However, because the lifespan of a mosquito is only three to four weeks long in the field, and the first blood meal is taken when the mosquito is at least three to four days old, the mosquito is only capable of transmitting the disease for a few weeks before it dies.

Rückert said these findings were surprising because researchers originally thought the rate of coinfection might be lower because one virus could out compete the other during the incubation phase. However, a study conducted by the University of California, Berkeley, found that 20 percent of individuals who were infected with one arbovirus were coinfected with another.

“These dual and triple infections happen in people way more than you would think,” Ebel said.

To mitigate this problem, Ebel said steps should be taken to go after the source.

“You’ve really got to go after the mosquito,” Ebel said. “If you can control the mosquitoes, you can do a huge favor.”

In the tropics, insecticides are used to combat mosquito populations. However, Ebel said mosquitoes can become resistant to certain types of pesticides. To stay ahead of this, different pesticides can be rotated throughout the year so mosquitoes are unable to build up a resistance as easily.

Ebel said researchers are also exploring the idea of releasing sterile males into the field to compete with wild male populations. Because a female that mates with a sterile male will not have any offspring, this process would decrease the number of mosquitoes capable of coinfecting people.

Drug developers are also working to create a Zika vaccine that should be on the market in the next few years, Ebel said.

Overall, Ebel said in order to solve this problem, people have to work together to find meaningful solutions.

“It’s a big problem and it’s going to be an even bigger problem,” Ebel said. “I don’t think the problem is going away, I don’t think we have a magic bullet. I think it’s going to take … real diligent, integrated management. We’re going to have to find good ways to deal with them to minimize the burden.”