Surge of protests unique to this election 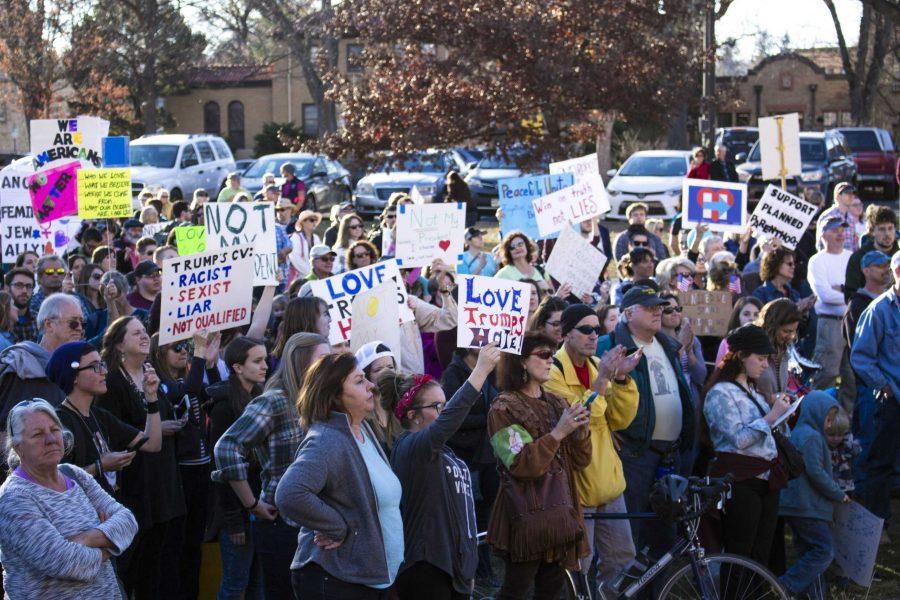 Hundreds gathered for peaceful protest in light of the recent presidential election at Civic Center Park for the Peace and Solidarity Rally hosted by Fort Collins for Progress.

In the wake of that surprising outcome, protests and rallies have broken out across the country in opposition to the results. The vocal response has created a unique political climate never before seen following an election.

Kyle Saunders, professor of political science at CSU who specializes in elections and behaviors, said he can’t remember seeing a presidential election this contested.

“The response that we’ve seen from many disadvantaged groups is not surprising in that context, simply because President-elect Trump has been relatively inconsistent on some of the things that he’s said over the past few days,” Saunders said. “It’s a visceral and not all that surprising response to that uncertainty.”

Though some reasons for this may be that the rallies are more widely covered due to improved information technology, there is no doubt in his mind that this election has riled up the public more than any other recent election.

These protests, he said, are by and large symbolic in nature, not policy-driven.

The majority of opposition protests so far, he said, are in response not just to the election of Trump but to the policy stances he put forward in his campaign on topics like immigration, abortion, gay marriage, transgender rights, and many more contentious topics.

Some protests that have taken place in Fort Collins in the last few days include a Peace and Solidarity rally on Saturday, a Standing Rock rally on Sunday, and a DACA support rally on Monday.

John Kefalas, a member of the Colorado Senate, spoke at the Peace and Solidarity Rally, which drew more than 1,300 people. He encouraged the participants to continue their activism and take it to the state and local levels.

“You need to be continuing to peacefully exercise your first amendment right, which is the right to assemble,” Kefalas said.

The CSU Intersectional Activism Network promoted the DACA rally, which was organized by Dreamers United and drew about 400 people.

“The solidarity theme of these rallies is important for banding together with groups of marginalized people that very understandably feel unsafe and unwelcome in Trump’s ‘great America,’” said Jack VanVleet, a member of the CSU Intersectional Activism Network. “We need people of privilege to step up and say this kind of thing is unacceptable in society. They need to step in when they see this kind of harassment happening.”

VanVleet said the reason they are protesting is to emphasize that Trump’s campaign, based predominantly in controversial rhetoric about immigration and other issues, is not a normal political campaign given Trump’s lack of government experience and former career as a TV reality star.

“It is important to push back and say that we will not let crude, sexist behavior and racist rhetoric become normalized.”

Part of the reason this election has been so contentious is due to the personality of the president-elect himself, Saunders said.

“Part of the story is just that it’s Trump, and he’s such a polemic figure, and the shock of the election itself,” he said.

Saunders said that the country stands on a precipice now, to see what Trump will actually do in office – and if he will fulfill the promises he made in the campaign.

“Is Candidate Trump going to govern as he stated in his rhetoric in the campaign?” Saunders asked rhetorically. “Or is there another President Trump who is more pragmatic, who is not going to be as extreme or hyperbolic in the policies that he tends to push?”

The protests thus far have been largely against Trump himself, and the rhetoric of his campaign, Saunders said. In the future, once policy begins to be enacted, this dialogue will probably change to focus more on specific laws and government actions. At that point, activism will make more of a difference, he said.

Policy changes have also been met with high degrees of uncertainty. Republicans have relatively unfettered control of the federal government for the first time in many years, Saunders said.

“So policy change is ultimately up to Trump and the Republican leadership,” he said. He added that activists may want to base their decisions for the future around specific policies.

That is the direction VanVleet and the CSU Intersectional Activism Network plans to go. VanVleet said they will rigorously oppose any destructive policy or rhetoric from this campaign.

Some activists are beginning to policy moves now with the appointments of Stephen Bannon and Myron Ebell.

“The hiring of Stephen Bannon, a known and proud white ethno-nationalist to be Trump’s Chief Strategist and Senior Counselor is an outrage,” VanVleet said. “A look at his staff and cabinet picks is worth a story all on its own.

A particular area of indignation for VanVleet is climate change. He said Trump’s previous denial of climate change as a hoax perpetuated by the Chinese, and his rhetoric during the campaign, shows a worrying trend toward environmental degradation.

“These kind of appointments must be vigorously opposed and talked about,” VanVleet said. “That’s why we need rallies expressing anger and dissent towards these kind of things.”

He expressed his attitude toward the protests using a quote from noted American historian and social activist Howard Zinn: “Yes, dissent and protest are divisive, but in a good way, because they represent accurately the real divisions in society. Those divisions exist—the rich, the poor—whether there is dissent or not. But when there is no dissent, there is no change. The dissent has the possibility not of ending the division in society, but of changing the reality of the division. Changing the balance of power on behalf of the poor and the oppressed.”

Given that Trump lost the popular vote, many protestors are now calling for the abolishment of the Electoral College, as well as petitioning electors to change their votes and vote for Hillary Clinton when they officially choose the new president Dec. 19.

When electors go against the votes of their state, they are called a ‘faithless elector.’ It almost never happens – and Saunders said that it is an incredibly long shot for enough Republican electors to change their votes for Clinton.

“I’m not convinced that, especially when they’re a Republican elite going off to cast their electoral vote, enough Republicans could be convinced to give up their Electoral College vote to deny the Republican Party their shot at a unified government,” Saunders said.

The petitions attempting to abolish this system are expressions of frustration with the system, and the public feeling like they have to go around the political parties to effect political change, Saunders said.

He added that it is unlikely the Electoral College will be going anywhere. Though states could control how their votes are used, such as designating proportionate votes to the actual votes in their state, or a state allowing its electors to side with the popular vote rather than the state vote, the states are unlikely to implement this because it significantly lessens their political power.

“Our institutions of government are meant to persevere. Protests are a natural response to perceived political threat and change,” Saunders said. “What we are seeing so far is not our institutions breaking; this is just them bending a bit.”

Collegian enterprise editor Michelle Fredrickson can be reached at news@collegian.com.