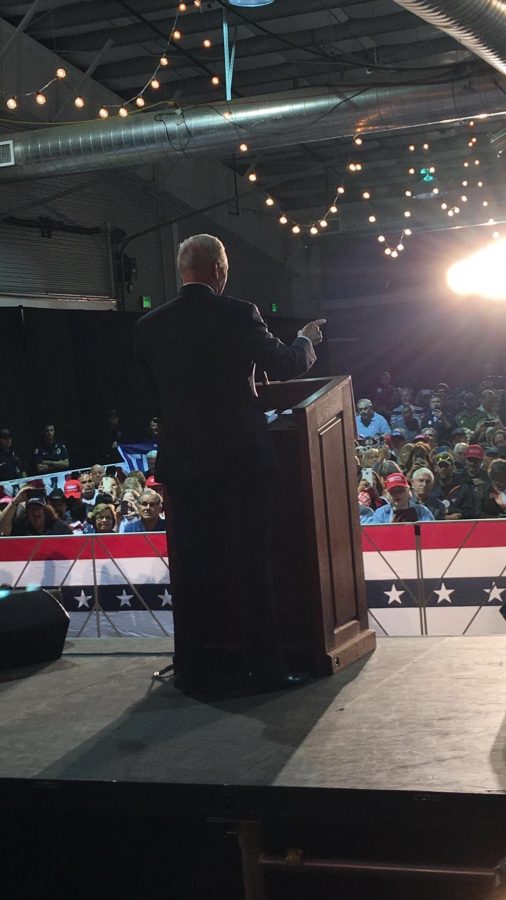 Pence said that all governmental, economic, and security problems can be blamed on Trump’s Democratic rival, Hillary Clinton as well as President Barack Obama. He spoke about the Clinton campaign and the scandals associated with it, one being the Benghazi scandal.

Pence said that three soldiers and a United States Ambassador died when Islamist militants attacked a U.S. diplomatic compound in Benghazi. When Hillary talked to the families who had lost their loved ones, Pence said that she should have handled it better.

“(Hillary) said, and I quote, ‘What difference at this point does it make?'” Pence said, which was then accompanied by “boos” from the crowd.

He also talked about how attacks on the police have increased since the Obama administration, and said that two police officers were ambushed and killed this morning.

“An attack on our police is an attack on us all,” Pence said in quoting Trump, which was then followed by cheering and thunderous applause.

Pence said that law enforcement need to be tightened, due to this.

Pence also said Trump is advocating for a change, while Clinton will leave everything in the United States mostly the same.

He talked about Obamacare and how it was a disaster to the United States.

“We’re going to pull (Obamacare) off the market and do this the American way,” Pence said.

Pence switched gears to talk about the upcoming election.

“We are just six days away from a great victory,” Pence said.

Pence talked about the proposed plans for the country if Trump gets elected as president, such as repealing Obamacare and reforming the Supreme Court.

“Donald Trump will restore law and order in every city and every community in this nation,” Pence said.

Congressman Ken Buck, who introduced Mike Pence, said that Trump can bring this country together again.

“This country is more divided now than it has been since the Obama administration,” Buck said.

Many people who attended the rally supported these views.

Dakota Deirueste, sophomore and political science major at CSU, said that seeing the candidates in person humanized them.

“You get to see them speak as individuals,” Deirueste said. “You know, they’re not just running for their party, they’re running for you.”

Pence closed with some things that Republicans should do after they leave the rally.

He talked about the many early-voting opportunities around Loveland.

“Two, go tell somebody,” Pence said. “Colorado is going to play a big role in the election.”

He said that getting the word out is very important and that it is not a choice between Republicans and Democrats, but between up and down.

He then moved on to his next point.

“Three, have faith,” Pence said. “Have faith in the American people.”

Finally, he closed with words that reflected his faith-oriented background.

“Bow the head and bend the knee,” Pence said. “Just pray for our country.”

Then, he closed with some words from Abraham Lincoln.

“I’d rather concern myself with whether we’re on God’s side, than God’s on our side.”