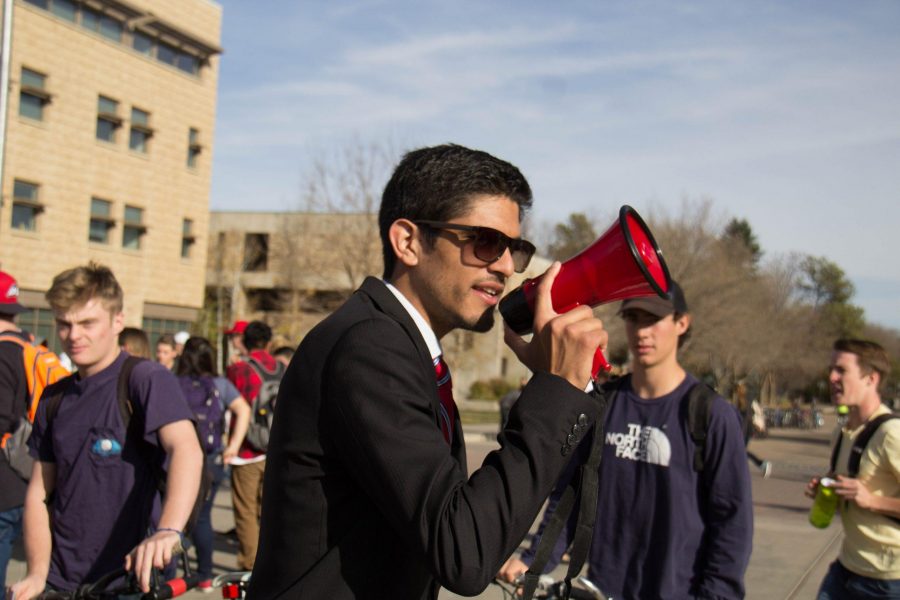 For months now, there have been Presidential campaign workers in the plaza every Monday through Friday. After all of the commotion on the plaza on Monday and Tuesday, the Collegian interviewed some of the students that have made their presence known there each day.

Emily Faulkner and Juan Caro are members of the Conservative Interest Group of Colorado, and are both supporters of Republican Presidential nominee Donald Trump.

Collegian: What are you doing here today?

Juan Caro: “I’m making sure the Republican voice is heard. It’s hard to be a Republican. The reason I’ve been so loud lately is because when you walk around campus, when you wear your “Make America Great Again” hat, you get dirty looks, you get shoved, you get insults, and no one wants that so we see that the Republican voice is being suppressed, and I can’t do that anymore so we got two huge signs and we’re getting loud.”

Emily Faulkner: “We’re out here campaigning for Trump. It’s election day, it’s very important people get out there and vote. A lot of people think that their votes don’t count, but they definitely do. We have a very left-leaning campus, and I think it’s really important that the right-wing conservatives, we get our chance and our voice.It’s really hard to have a say on this campus when you’re not a liberal or left-leaning so we’re just trying to be out here representing Trump and the conservative movement, supporting Darryl Glenn for US Senate.”

Collegian: Any response to the clash between Trump and Clinton supporters on the plaza?

Caro: “They were giving their points, we were giving our points, I think that’s fair. I thought that it was actually kind of fun, and I’ve shaken their hands today, and we’ve said, ‘whatever happens, we’re all still Rams, we’re all still friends, we’re all still Americans. And, you know, it’s good, we’re creating dialogue … They hear their side, they hear our side, and they’re finally hearing both sides. Before, it was just one side, now we’re giving people the opportunity to hear the right, to hear the conservatives, and it’s great.”

Faulkner: “I would say the left is just a little bit more obnoxious. They have crazy music playing, I could hear it all the way from the oval. But, the Trump supporters, we weren’t yelling at the Hillary supporters, we were just saying, ‘Hey get out and vote, go vote Trump.’ We were talking about Benghazi a little bit. It wasn’t directed at them, just trying to let people understand the issues and understand what’s at stake for this election. It was a little bit crazy yesterday, it’s been a little bit crazy today, with the Hillary supporters vandalizing the campus last night and this morning. We had Trump signs out that were vandalized, that were ripped up. … It was just really disappointing because what’s beautiful about this country is that we have our freedom of speech, and they’re taking that away from us.”

Charlie Lowell and Wendy Griesan are two college Democrats who have been campaigning for Democratic Presidential nominee Hillary Clinton on the plaza every day.

Jack Kennedy, the person who has campaigned for the past month with a megaphone, declined to be interviewed, saying he wants to maintain his mysterious presence on campus.

Collegian: What are you doing out here today?

Wendy Griesan: “We are getting the vote out, we are raising public awareness about how important it is to vote, and we are supporting our candidate, our lovely Madam President, Hillary. And, we were just trying to show those bigots who we are.”

Collegian: Why do you support Clinton?

Charlie Lowell: “I was a big Bernie supporter, but because Hillary and Bernie were able to work so closely together, there’s no other choice but to support Hillary. She has fantastic experience and she’s gonna make a kick-ass President, and I’m really excited to see the kind of stuff that she’s going to do, as well as the liberal agenda.”

Collegian: Any response to the clash between Trump and Clinton supporters on the plaza?

Lowell: “Michelle Obama said it best, they go low, we go high, and that’s what we’ve been doing. You know, we’ve had Trump people come up to us and get in our faces, and be aggressive, try to goad us, but for the most part we’ve just ignored them, and it’s worked out pretty well. If they’re trying to get under you skin it means you’re doing something right.”