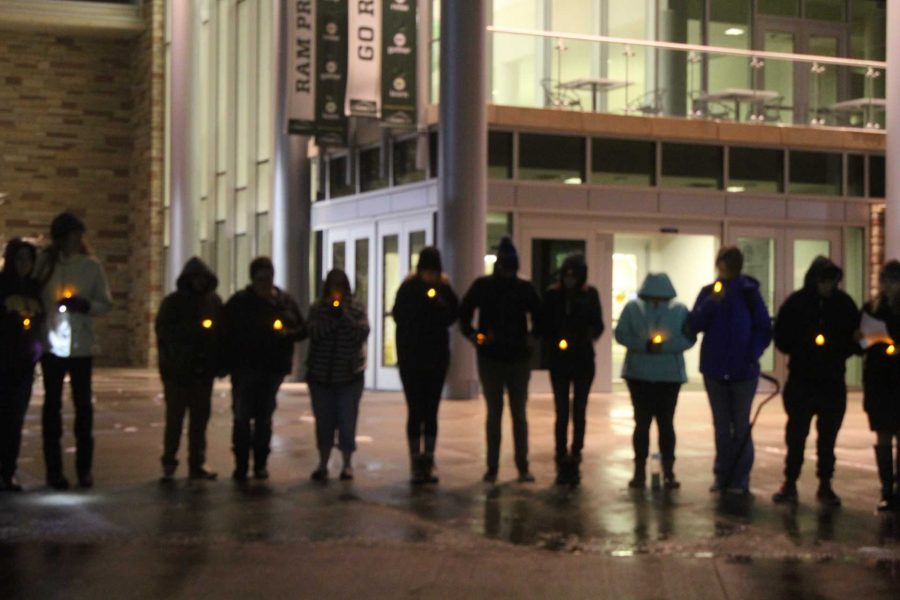 The Pride Resource Center held a candlelight vigil to honor those who were lost during Transgender Day of Remembrance 2016 Photo credit: Christian Johnson

The office held the vigil Thursday evening since the international Transgender Day of Remembrance is Nov. 20, while CSU is closed for Fall Break.

Members of the northern Colorado and CSU community spoke to an audience of over 50 people about their experiences as trans-identified individuals.

Christian Carroza, the student organizer of the event, began the event by reminding the audience why Transgender Day of Remembrance is significant.

“Over the last decade, more than one person per month has died due to trans-based hate and prejudice,” Carroza said. “We are here to honor the lives of those murdered for simply being who they are.”

Armani Flemings-Pride, a sophomore animal sciences major, spoke about how their intersecting identities as Black, queer and transmasculine makes them feel unsafe.

“There are times where I do not feel safe,” Flemings-Pride said. “Sometimes, I will just sit in thought, and say to myself, ‘What about me makes me a target? Is it that I’m queer? Maybe it’s because I’m Black, or maybe it’s because I’m trans.’ The most likely answer is that it’s all of them.”

Flemings-Pride also talked about how they personally struggle with how they are perceived daily.

“I wake up asking myself, ‘How do I show up in this space? How am I perceived? What do people think when they look at me?’” Flemings-Pride said. “I don’t want to think about these things, nor should I have to. I just want to be me. I want to be authentically me.”

Jess Cytron, a 2013 CSU graduate, discussed how they did not initially understand why Transgender Day of Remembrance was important when they first learned about it.

“I knew Transgender Day of Remembrance was important, but at the time, I couldn’t understand it’s power or its meaning,” Cytron said. “I went home with the privilege of being able to focus on something less sad.”

Cytron said their understanding of the day changed because of the personal importance of reducing anti-trans hate and violence.

“To harm this community is to harm my family, to harm the people I love more than I ever knew possible,” Cytron said. “(Transgender Day of Remembrance) is a time for tears and processing grief. It is a time for support and community bonding, and it is also our call to action particularly for those of us who hold privilege.”

Brandi Jensen, a community member, began their speech by thanking the crowd for attending and stating why the attendance is important to reducing anti-transgender hate and violence.

“By having every one of you here, you’re all taking a step forward in saying, ‘yes, your life matters,’” Jensen said. “When you’re a transperson, (and you lose a lot of people in your own life), that fear is definitely strong, so it makes it twice as powerful that all of you are here today.”

Following the speakers, the event moved out to the plaza to hold a candlelight vigil. During the vigil, the names of 26 transgender people murdered in 2016 were read.

Nathan Klein, a senior student double concentrating in electronic media and sculpture, said the event is important because it brings the community together and shows that anti-trans hate and violence is still an issue.

“I’ve been active in the LGBTQ community for almost 12 years now, and … I’ve seen how long this list can be,” Klein said. “I’ve stood for hours before, but … it’s powerful to feel the support of the community, but also potent to realize how many people are affected by hate crimes faced being trans or nonbinary, especially in the U.S. and other first world countries.”

Klein also said the vigil spreads a crucial message of peace since the post-election season has included hateful rhetoric.

“With the amount of hate crimes that have occurred towards the LGBTQ community, with the tagging of a transwoman’s car in Denver, we need to be able to spread a message of peace to combat one of intolerance and hate,” Klein said.

Morgan Iacono, a sophomore history major, said the vigil brings attention to an important topic within the queer community.

“For me, it was a very powerful event because it keeps bringing attention to something that’s not really talked about outside of our community,” Iacono said. “My significant other is trans, and … I want to do everything I can to keep them off this list as well as anyone else, so that in the future this list can keep getting smaller and smaller.”