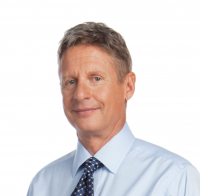 Gary Johnson is the libertarian candidate running for president in 2016.

Johnson is known for his open stance on consumption of marijuana and can often be counted on to show up in Nikes with a suit.

Johnson also ran on the Libertarian ticket in 2012. This year, his running mate is former Massachusetts governor, William Weld.

Johnson was governor of New Mexico from 1995 to 2003. He has been open about his previous consumption of marijuana both this year and during his time as governor, according to an article in The New Yorker. However, he said if elected, he would not be under the influence.

Johnson also vetoed more than 700 bills passed through a Democratic legislature, according to The New Yorker.

His platform addresses issues that the other candidates have addressed as well, including abortion, the criminal justice system, the environment, taxes and immigration.

According to his website, Johnson believes that abortion is a choice that should be left to the individual.

Personally, Johnson believes in the sanctity of life of the unborn. During his time as governor, he worked to ban late-term abortions. However, as a candidate, Johnson said he realizes it is a woman’s right to choose and that politicians cannot prevent women from exercising a legal right, according to his website.

His stance on abortion stems from the libertarian belief that the individual should be able to make their own choices in their personal life, and that abortion is a very personal choice.

According to his website, Johnson believes the country cannot solve immigration problems by building a wall or simply offering amnesty.

Johnson said he has an understanding of how intricate the immigration issues is as the governor of a border state. His platform focuses on an efficient way to provide work visas, conduct background checks and incentivize immigrants to pay taxes, obtain proof of employment and assimilate with America’s diverse society, according to the Johnson website.

During his second term as governor, in 1999, Johnson advocated for the legalization of marijuana. His high approval ratings did not come from his advocacy. In his time as governor, he stuck to lower taxes and less spending; he eliminated state employee jobs and cut income-tax rates.

Johnson became very heated when asked about his tax policy in a recent interview with Paul Lewis from The Guardian.

“Look, I came out for the legalization of marijuana, let me just use that as an example,” Johnson said when asked again about tax policy.

Johnson brought up his advocacy for legalization as an example, because he said he has been criticized for it over and over.

His website describes the federal tax code as doing all of the wrong things.

Johnson also addresses criminal justice on his campaign website, with a question not unlike the one posed by Bernie Sanders on behalf of the Clinton campaign.

“How is it the that United States, the land of the free, has one of the highest incarceration rates in the world?”

His website states that he, and the federal government, will be committed to real leadership in order to reform the criminal justice system in the way state and local governments are, but his website does not offer any specific policy initiatives.

Johnson believes that manmade climate change is probably happening, but that the debate should be exclusively about how the environment can be protected for future generations, instead of pursuing any kind of political agenda.

Johnson’s platform in regard to foreign relations had been criticized over the summer because of his inability to name a world leader he admires.

In an interview with CTV, he named Vicente Fox, former president of Mexico, in part because of his open stance on the legalization of marijuana.

He also addressed foreign relations in the Middle East.

“(The situation in Syria is) a situation that I would not have gotten into in the first place,” Johnson said.

Both Johnson and Green Party candidate, Jill Stein, were not present at the debates. Before the debates, for Americans who did not like either Donald Trump or Hillary Clinton, Johnson might have had some sway, according to an article in The New Yorker.

In order to participate in the debates, each of the candidates must be constitutionally eligible for the presidency, be on the ballot in enough states and be polling at a 15 percent average, at least, according to The Denver Post. Johnson was polling at around 8 percent in September, with Stein at around 3 percent.

Johnson is currently polling at 4.7 percent, and Stein is at 2.1 percent, according to the most recent polls available from RealClearPolitics.

Currently, Colorado State University does not have a club for campus libertarians or any kind of a “Rams for Johnson” movement.

Jacob Roberts, a business junior, supports Johnson because he feels is inclusive socially and responsible financially.

“Governor Johnson is the only candidate running on the platform of smaller government, lower taxation, free-trade and increased social liberties,” Roberts wrote in an email to the Collegian.

Erica LaFehr, of CSU Intersectional Activism Network, formerly “Rams for Bernie,” voted for Johnson in 2012, but said she will not vote third party again.

“I am not voting for Gary Johnson because his libertarian philosophy rests in many problematic contradictions,” LaFehr wrote in an email to the Collegian. “The idea that someone can be fiscally conservative yet socially liberal is astounding.”