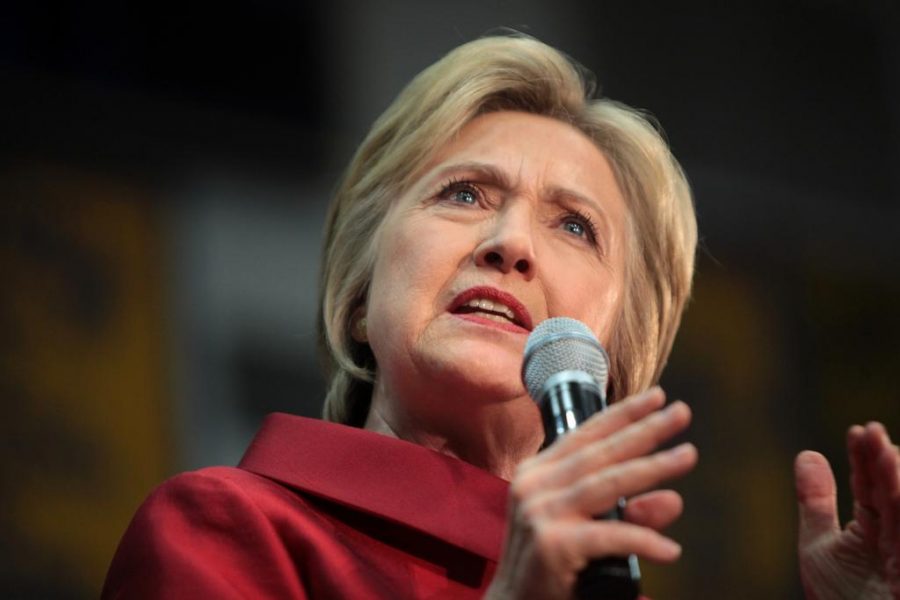 Clinton was born in Park Ridge Illinois is 1947. She graduated from Yale Law school in 1973 and spent her early professional life as a lawyer and children’s activist. She later moved to Arkansas where she taught law at the University of Arkansas and married her Yale colleague Bill Clinton.

Bill Clinton became the governor of Arkansas in 1978 and the Clintons welcomed the birth of their first and only child, Chelsea Clinton, in 1980. Starting in 1993, Hillary started her active role of first lady. In 2001, Hillary Clinton became the first female U.S. senator from New York and served until 2009.

After a failed attempt to secure the democratic nomination for the 2008 presidential election, she was selected by President Barrack Obama to serve as Secretary of State. Clinton served from 2009 to 2013, when she decided to step down. In April of 2015, Clinton announced that she would join the 2016 presidential race.

Students on campus present a variety of opinions about Clinton and why they are or are not voting for her.

“I voted for Hillary Clinton because she’s the only qualified candidate,” senior Ashley Brown said. “And, honestly it’s because she’s a woman. I believe in representation. I can’t believe there hasn’t been a woman president in all of these years.”

Conversely, others view Clinton’s extensive experience as a drawback, and other students said they believe she is a career politician.

“I don’t trust her,” George Pensington said. “She could lead us into another recession.”

For Mercedes Renshaw, president of the CSU Democrats group, reasons for voting for Clinton are Clinton’s experience, pro-choice stance, advocacy for women and children as well as her character.

In addition, Renshaw believes Clinton is a strong member of the Democratic party.

“She upholds the values of the Democratic Party,” Renshaw said.

In terms of current polling, Clinton has a 45.6 percent national polling average compared to Trump with 41.7 percent according to the New York Times.

Clinton is an advocate for investing in America’s education system at all levels. She mentioned education in all three of the presidential debates.

“I feel strongly that we have to have an education system that starts with preschool and goes through college,” Clinton said during the final debate on Nov. 19. “That’s why I want more technical education in high schools and in community colleges, real apprenticeships to prepare young people for the jobs of the future. I want to make college debt-free and for families making less than $125,000. You will not get a tuition bill from a public college or university if the plan that I worked on with Bernie Sanders is enacted.”

Clinton believes that providing aid to the middle class and initiating debt-free college will help the economy improve.

“I think (that) building the middle class, investing in the middle class, making college debt-free so more young people can get their education, helping people refinance their debt from college at a lower rate … are the kinds of things that will really boost the economy,” Clinton said in the first presidential debate on Sept. 26. “Broad-based, inclusive growth is what we need in America, not more advantages for people at the very top.”

Clinton believes in climate change and has said she will fight against it.

“So, I have a comprehensive energy policy, but it really does include fighting climate change, because I think that is a serious problem,” Clinton said during the second debate. “And, I support moving toward more clean, renewable energy as quickly as we can, because I think we can be the 21st century clean energy superpower and create millions of new jobs and businesses.”

She wants to continue hydraulic fracking in the U.S, but with increased vigilance. According to her campaign website, measures will be taken to control fracking related methane emissions, protect community water and prevent related seismic activity.

Clinton is advocating for a pathway to citizenship for illegal immigrants and to help keep families together.

“As a senator I was proud to co-sponsor the national DREAM Act and to vote for it,” Clinton said on Oct. 30, 2014. “I’m a strong supporter of comprehensive immigration reform and I believe that we have to fix our broken immigration system. We have to keep families together. We have to treat everyone with dignity and compassion, uphold the rule of law, and respect our heritage as a nation of immigrants striving to build a better life.”

Since then, Clinton has proposed that if elected, she would create a system for immigration reform within her first 100 days in office.

“So, I think we are both a nation of immigrants and we are a nation of laws and that we can act accordingly,” Clinton said during the final presidential debate. “And, that’s why I’m introducing comprehensive immigration reform within the first 100 days with the path to citizenship.”

Clinton is a longtime supporter of creating a health care system to reach uninsured Americans. She also wants the government to moderate the price of prescription drugs.

“As your president, I want to build on the progress we’ve made,” Clinton said on Sept. 21, 2015. “I’ll do more to bring down health care costs for families, ease burdens on small businesses, and make sure consumers have the choices they deserve. And, frankly, it is finally time for us to deal with the skyrocketing out-of-pocket health costs, and particularly runaway prescription drug prices.”

Clinton was previously investigated by the FBI over the use of a private email server, rather than a government email while serving as secretary of state. The controversy lies in the question of whether Clinton violated transparency laws or put government secrets at risk.

Recently, the FBI announced that they are investigating more emails from Clinton’s private server found on the computer of Anthony Weiner. Weiner’s wife, Huma Abedin, is one of Clinton’s top aides. The emails surfaced in an unrelated FBI case investigating illicit text messages between Weiner and a 15 year old girl. The FBI is currently reviewing the emails in order to see if there was any improper containment of classified information.

Collegian reporter Nicole Towne can be reached at news@collegian.com or on Twitter @nicole_towne21