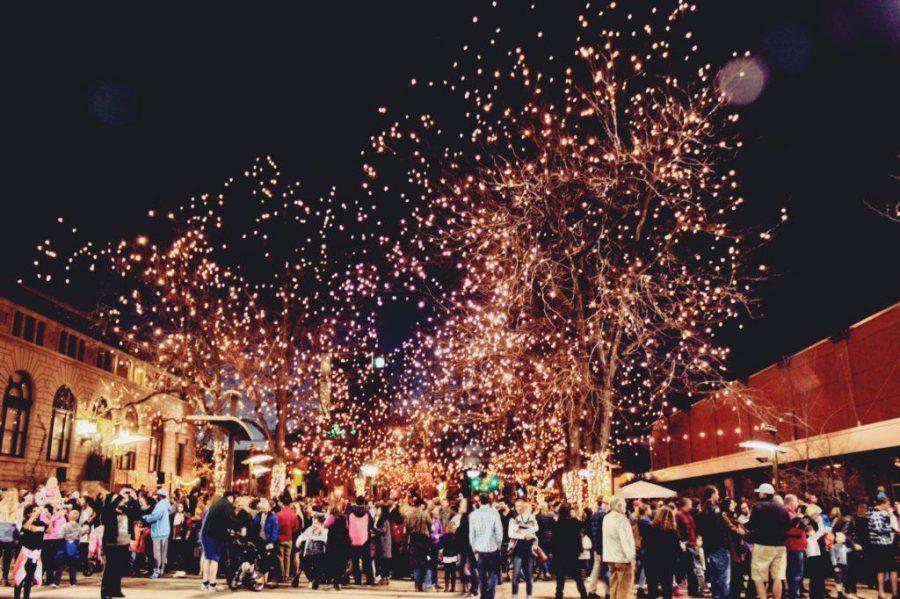 The holiday lights illuminating the streets of Fort Collins are expected to cost around $115,000 this year.

The lights are a Fort Collins tradition that started in 2007. The lights remain lit from Nov. 4 to Feb. 14.

The Downtown Business Association, Downtown Development Authority and the City of Fort Collins split up the cost to pay for the lights.

The DBA contributed $35,000 to the lights and raised some extra in order to host the lighting ceremony event. The DBA raised their money from sponsorships from Blue Ocean Enterprises, Cosner Financial Group, Eye Center of Northern Colorado, First National Bank and Blue Federal Credit Union.

This year, the DDA contributed $35,000 to the lights. Derek Getto, the programs administrator, said the project was estimated to cost around $105,000 for the city.

The city begins to hang the lights 6 – 8 weeks before the initial lighting ceremony. The city of Fort Collins has a contract with Swingle Lawn, Tree and Landscape Care, which is an independent contractor that hangs the lights for the city.

The cost of the community lighting display is expected to be similar compared to 2015.

All of the lights that are strung up are LED bulbs. LED stands for light-emitting diode. This means that the lights specifically direct light in one direction unlike fluorescent bulbs that emit heat and light in all directions. This makes LED lights more energy efficient and sustainable compared to other light bulbs.

The lighting ceremony takes place every year and the city uses low-energy and sustainable lights.

“I think by going from traditional incandescent to LED lights that is showing a significant commitment to reducing the use of electricity,” said Mike Brunkhardt, the supervisor of the Parks Division. “That goes in line with our mission here at the city to try and provide top quality services with the least impact on the environment and the use of resources.”

The Downtown Business Association put the lighting ceremony together this year.

The ceremony took place on Nov. 4. The University Center for the Arts’ Chorus previewed some songs that will be in the holiday showcase, and there was also a saxophone quartet and a brass quartet.

The event began at 5:30 p.m. and the lights were “unveiled” at 6:30 p.m. Mary’s Mountain Cookies provided refreshments and Kilwin’s Chocolate handed out fudge to members of the community.

The lights illuminate the trees on Walnut Avenue, Mountain Avenue, Pine Street, Linden Street and inside Old Town Square and Oak Street Plaza. The lights can also be seen on College Avenue and from Laporte Avenue to Magnolia Street.

Collegian reporter Hailey Deaver can be reached at news@collegian.com or on twitter @autumn_hail.