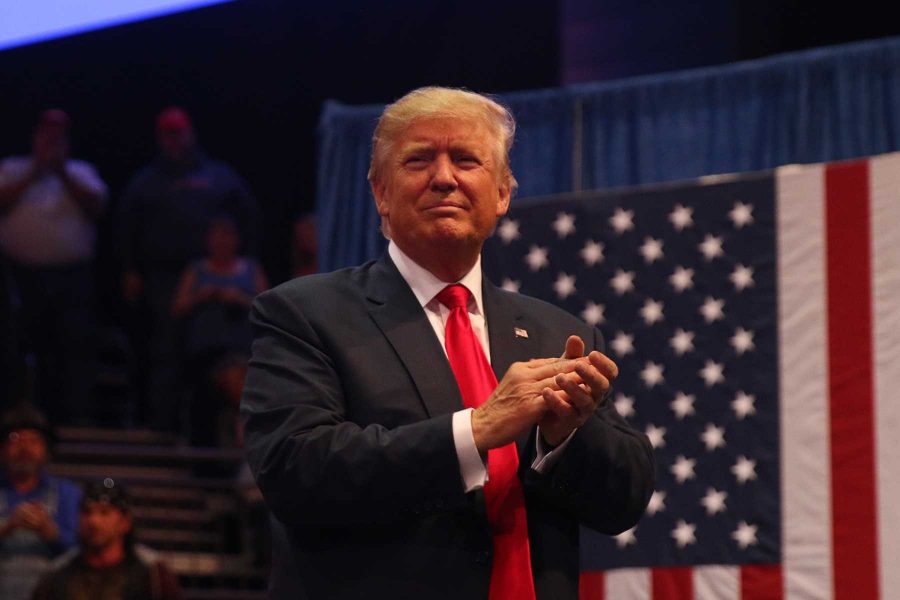 Donald Trump walks off stage after his rally in Loveland, Colorado on October 3, 2016. (Elliott Jerge | Collegian)

In June of last year, Trump officially announced his candidacy after showing interest in running for president for years. If Trump wins the election he will be the first president to never hold any prior political office or serve in the U.S. military.

According to a collection of national polls from the New York Times, Trump is currently polling at about 41.7 percent compared to his democratic opponent, Hillary Clinton, who is polling at about 45.6 percent.

According to the New York Times election forecast, Trump has a 12 percent chance of winning and Clinton has an 88 percent chance.

Trump was born in Queens, New York in 1946. In 1968, he graduated from the University of Pennsylvania with a degree in economics. Afterwards Trump worked as a real estate developer for his father, and in 1971 he was given control of his father’s company and renamed it the Trump Organization.

The Trump Organization has built numerous hotels, casinos, office towers, golf courses and urban developments in the United States and around the world.

Trump has received hundreds of millions of dollars in loans from his father and others to support many of his real estate developments. He has net worth of $3.7 billion, according to Forbes. However, Trump has also filed for business bankruptcy four times.

Students had mixed opinion on the republican candidate.

“Trump doesn’t have a sound background in politics so running a country which is based on political systems would not necessarily work out in America’s favor,” said Sean Coleman, a freshman student. “He has no experience in (our political system).”

Trump has not released an official proposal regarding college tuition costs.

According to a New Republic article this could reduce levels of Pell Grant funding. Trump rejects proposals for debt-free or tuition free public colleges.

Trump has also said that colleges should factor in the future earnings of students based what they are studying before offering loans. Trump believes that colleges should think carefully before lending to liberal art majors because they may not have job security after graduation, according to Sam Clovis, the co-chair or Trump’s campaign.

Trump said that he does not believe that climate change is caused or influenced by humans, according to several reports.

He has said that if he was elected he would back the U.S. out of the Paris Climate Change agreement, which commits almost 200 countries to cutting greenhouse gas emissions.

He has said that in his first 100 days of presidency he would repeal Environmental Protection Agency regulations established by President Barrack Obama.

Trump said that he will build a wall on the American-Mexican border to keep out illegal immigrants and that Mexico will pay for the wall.

He said that he will repeal both of Obama’s executive orders regarding amnesty to illegal immigrants.

One of the executive orders gives amnesty to illegal immigrants who are parents of U.S. citizens or other legal residents and allows them to get a three year work permit, a social security permit and a driver’s license. The other allows for illegal immigrants who entered the U.S. as a minor before 2010 to receive amnesty.

Trump is against the Affordable care Act, known as Obamacare, and proposes a full repeal of it. Trump said that Obamacare has led to higher premiums, less market competition and fewer choices.

Trump’s health care plan emphasizes letting insures sell across state lines and market competition. He supports Medicaid but wants it to be managed on the state level. Trump has said that he will cut funding for Medicare.

Trump has said that he would consider cutting various healthcare programs, social security and other welfare programs. He said this will make up for the tax cuts he proposes for those who make over $100,000 dollars per year and for corporations.

Tax cuts for the rich can encourage investment and business spending, however even with that accounted for, the Tax Foundation predicts that Trump’s plan would lead to a $2.6 to $3.9 trillion dollar loss in government revenue.

“If I’m elected I would be very strong in putting certain judges on the bench that maybe could change (the ruling), but they have a long way to go,” Trump said in an interview with Fox News. “I disagree with the court in that it should have been a states’ rights issue.”

Trump is against abortion has said that he would put pro-life justices in the Supreme Court and expressed interest in overturning Roe vs. Wade.

He said that he will defund Planned Parenthood and that people who perform abortions illegally should be criminally charged.

One of the most controversial topics during Trump’s campaign were his remarks toward women and his treatment of women. Trump has called women pigs at rallies and during one of the debates he interpreted Clinton when she was talking about policy and called her a nasty women.

In a video from 2005 that was released last month, Trump said that since he is a star he can do whatever he wants to women, including kissing them and “grabbing them by the pussy” without their consent. In the video, Trump and television show host Bill Bush laughed about Trump saying that he has done this.

More than 10 women have accused Trump of sexual assault and sexual misconduct.

Trump has also been criticized for encouraging violence at his rallies towards protesters and for refusing to disavow the support of ex Klu Klux Klan leader, David Duke.