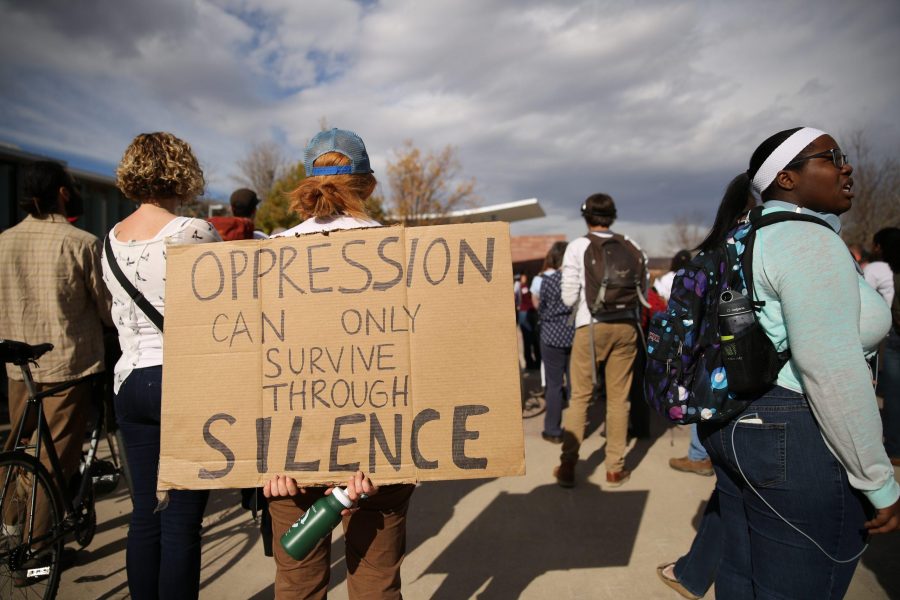 A sign advocating for the human rights of undocumented and pressed people is seen during a DACA rally in the Plaza on Monday. (Forrest Czarnecki | Collegian)

A DACA support rally, put on by Colorado State University’s Dreamers United, drew in hundreds of CSU students and faculty to the plaza Monday, Nov. 14.

DACA, Deferred Action for Childhood Arrivals, is an American immigration policy created by President Barack Obama in 2012. The executive action gives certain rights to those who are undocumented and brought to the United States as children.

Students who file with DACA are given an American drivers license, a social security number, and a United States work permit. Those who wish to educate themselves and go to a university receive in-state tuition.

The rally started with a speech from Brithany Gutierrez, a sophomore Ethnic Studies Major. Gutierrez said that the rally was not a political debate, and that they were not there to protest one side or the other. Rather, she said, the demonstration was a time to bring light to undocumented CSU students.

Gutierrez was one among many people who witnessed a the “Free Speech Wall” that was constructed on campus in early October in support of then Republican candidate Donald Trump. Gutierrez explained that she, among a few others, cried at the sight of the wall and what it represented.

“That’s when I realized so many people don’t realize there are so many undocumented students,” Gutierrez said to the crowd.

She continued to explain that there are a large group of CSU students who are undocumented and are being helped by DACA, and that the community should support and accept them.

“We call ourselves dreamers, but we’re the ones who don’t sleep,” Gutierrez said to finish her speech.

After leaving the microphone in the middle of the circled crowd, people were encouraged to come forward and tell their stories and experiences.

Terrance Bishop, a biomedical and chemical engineering senior left his message to the crowd short and sweet.

“We hear you and we love you,” Bishop said.

Following Bishop were several other students, all of which either shared a story or experience of their own or stated that they cared and loved for all undocumented students on campus.

Daniela Pineda Soracá, the Associated Students of Colorado State University student body president, was one of the many to come forward and share her experience. She said that when she became the student body president she received hateful messages on social media because she was undocumented as a child. Soracá is a permanent resident of the U.S. and on a path towards U.S. citizenship. She said as a child, she feared losing her freedom – something that she says many current DACA students fear.

“Many don’t have to wake up fearing it is their last day in the U.S.,” Soracá said.

Soracá said that the demonstration was important for the CSU and Colorado community, because it showcased how many students have lived in the shadows, and that those students are the opposite of what the media may portray them as. The student body president said that if any student wants support, they can personally reach out to her if they need someone to talk to.

Many of those who did not speak stood in the crowd sporting signs of support for undocumented students.

Haley Dallas, a third year resource economics and natural resource management student held a sign that read “White Supremacy is Terrorism,” and explained that her reason for being there was for intersectionality. As a member of the Queer community, she said that she felt that she had to stand with people of all kinds of otherness.

“I need to stand with my undocumented friends,” Dallas said. “My issues are connected to everyone else’s issues.”

Other students came to support the CSU community.

“It’s great to see a campus come together and bring a cohesive community to CSU,” said Jake Aglietti, a third year communications student.

Aside from students, Colorado Sen. John Kefala was present and spoke to the crowd.

Kefala encouraged students, both documented and undocumented, to do their best to stay engaged, as well as to reach out to one another and affirm one another’s feelings.

“Believe me, you have friends and allies in the state, and we have your back as best we can,” Kefala said.

Gutierrez brought the rally to a close by asking the crowd to stand silently with their fists in the air as a sign of solidarity of undocumented students.