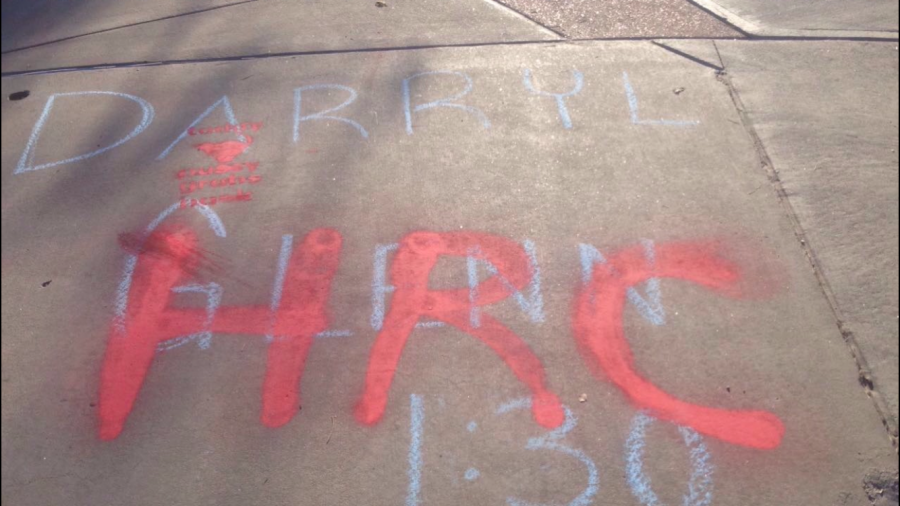 Colorado State University woke up to vandalism on central campus the morning of Election Day.

Stickers that read “I’m With Her” were plastered on the windows of the Lory Student Center, outside the offices of the Associated Students of Colorado State University, and chalk advertising Darryl Glenn on campus was covered with “HRC” in red spray paint.

A number of flyers were strewn across campus that read “Today is the day where the pussy grabs back.” The phrase was also spray painted on the plaza. The flyers had a picture of a cat on them, according to several Trump supporters who were on campus in the early morning.

The spray paint and the stickers had been removed as early as 8:30 a.m. on Tuesday according to several sources.

Students campaigning for Hillary Clinton on the plaza Tuesday said they were not aware of the incidents, and did not make a comment.

Joshua Williams, officer of governmental affairs for ASCSU, said he believed the stickers on the ASCSU windows were placed by Hillary Clinton supporters, but that it was unclear if the vandalism was associated with the Clinton campaign or the Democratic Party.

Williams did not want to point blame at a specific party or group. He said it does not make sense to throw a party under the bus as the election draws to a close.

“We just wanted to get (the stickers) down as quickly as possibly,” Williams said.

Williams worked with LSC Facilities in order to remove the stickers.

The involved parties responsible for the vandalism were independent actors, according to Colorado Press Secretary for the Hillary for America campaign, Meredith Thatcher.

“The (organizers) for the Clinton campaign would never do that,” Thatcher said.

Conservative students on campus for Election Day were concerned about their own freedom of speech after witnessing the vandalism on campus.

“The vandalism is absolutely deplorable,” said Juan Caro, chair of the conservative interest group, a local coalition of libertarians and republicans. “We want people to express who they’re voting for, but when our signs are being ripped up, when our students are walking around with hats getting spit on and pushed, we start seeing oppression of speech … That’s only going to make us louder.”

Republican political strategist, Joe Santaniello, who worked on Ben Carson’s youth outreach, in addition to other campaign outreach, explained why conservatives were out in force on campus Tuesday following the vandalism.

“(When) we belittle people and try to influence people’s opinions through fear at the voting location, it’s really unacceptable,” Santaniello said. “We really need to take a stand against that. Whether you’re democrat, republican, libertarian or green party, take a stand … Vandalism and destruction of property is unacceptable and we are here taking a stand against that. No one should feel intimidated by another party in voting.”

Students rallied on the plaza and outside of the LSC throughout Election Day for both presidential candidates, as students made their way to the LSC to cast their votes. No evidence of vandalism remained after 9 a.m.