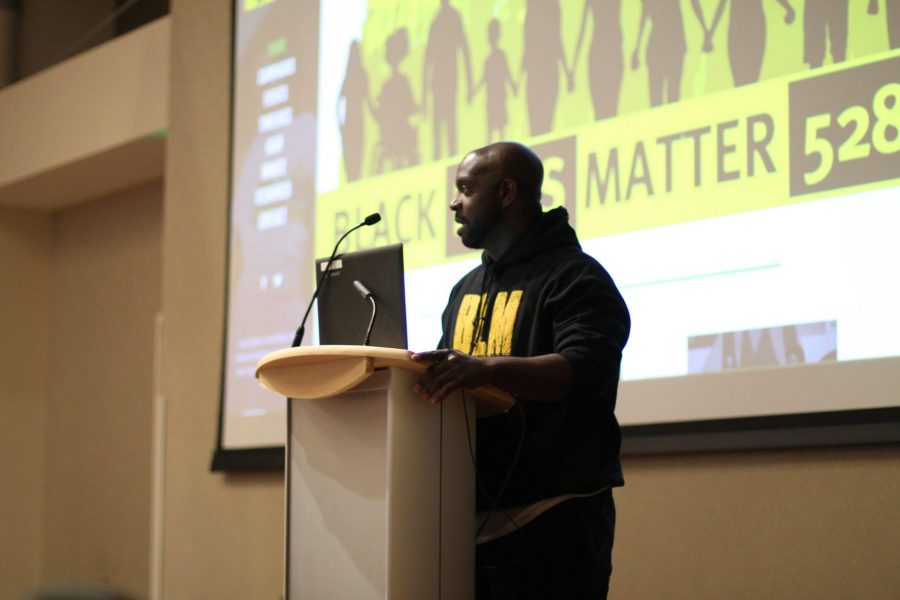 Around a hundred students and faculty gathered for a “Why Black Lives Matter” presentation hosted by the department of Social Work inside the Lory Student Center Ballroom A on Monday.

“Because peace means nothing when it’s politically incorrect to let our little black boys die without criminalizing them first,” Lowe said.

Lowe said his poem was written after the Michael Brown shooting, and that it came from a place of extreme pain and anger. He said he needed to tell people how he felt.

“If you were raising a child knowing you’re afraid to tell them to go outside because they could die, how does that affect you?” Lowe said.

The main face and voice of the presentation was Jumoke Emery from Colorado’s Black Lives Matter 5280, the only Black Lives Matter organization in Colorado. Emery has been present at a wide variety of different Black Lives Matter campaigns, be it protests or rallies. Earlier this week he was in North Dakota, and witnessed people against the Dakota Access Pipeline face off with police.

In his presentation, Emery explained his own experience with the police and experiences of others who had similar situations. He encouraged people of color to stand up and seek justice for themselves.

“I say ‘Black lives matter’ because there is no way that you can ever convince me that all lives have mattered in this country,” Emery said.

Emery said after returning home from Ferguson for a demonstration, he was pulled over and arrested because eight years prior he was driving with a broken headlight and was driving without the proper insurance. He was jailed for the weekend and missed his aunt passing away.

Emery said he was racially profiled numerous times throughout his life.

Emery argued his main point against the “all lives matter” phrase through sharing his past experiences as well as his discussion on the topic of fairness and justice.

“Somehow it is a political statement to love black folks,” Emery said. “Somehow loving black folks is an insult to every other person.”

By the end of his speech and into his question and answer portion, students, faculty, and others from the audience shared their experiences and their feelings on the matter, explaining racism they had faced as a person of color.

The presentation brought together individuals who had experienced racism in their lives into a place where they could share those experiences.

Emery added that people who were unsure about the topic and did not know many details should do research of their own, so that they could see what was happening and what he saw.

“We have to say Black lives matter, because no one else has the courage to,” Emery said.