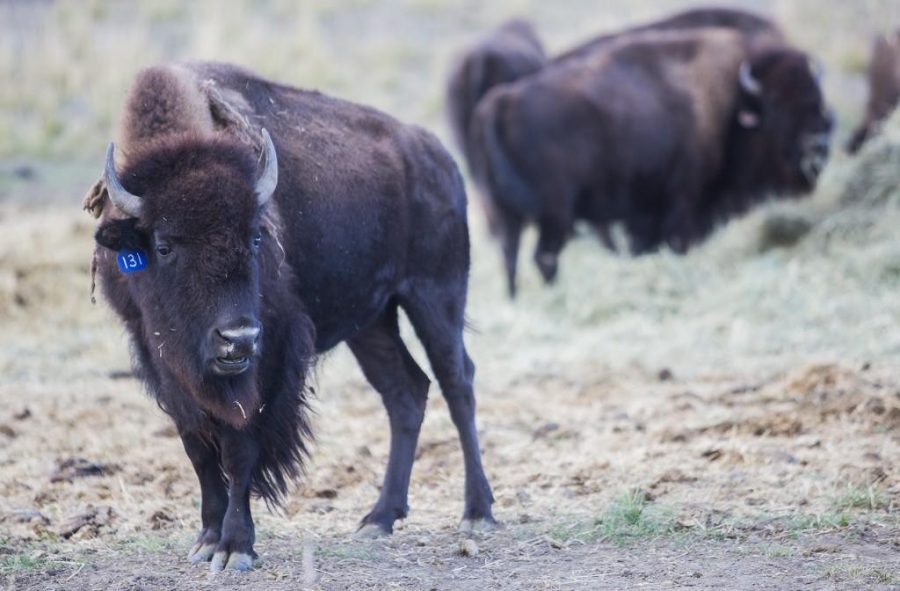 Adolescent bison await their release back into their natural environment in 2015 at CSU's Foothills campus. (Collegian file photo)

The herd of 16 bison are thriving in the Soapstone Prairie Natural Area since their release from CSU’s Foothill Campus last year due to a conservation project.

Now, a year later, the herd has grown to 16 bison, all healthy and disease free. A bull, originally from Yellowstone, joined the northern Colorado herd in spring 2016 and could father as many as eight calves, whose births are expected in spring 2017, further growing the herd.

“We hope to see our herd grow and contribute to the general ecology of Soapstone Prairie Natural Area and Red Mountain Open Space,” said Jennifer Barfield, a reproductive physiologist with the CSU Animal Reproduction and Biotechnology Laboratory. “We also hope to see this herd become a genetic resource for other bison herds that may need or desire new genetics. The Yellowstone genetic background of these animals makes them particularly valuable for conservation efforts and we hope to see our animals contribute to the species as a whole in that capacity.”

CSU played a large part in this conservation effort. The University contributed to the establishment of the bison herd through CSU’s reproduction experts who supplied modern fertility science by cleansing the bison embryos of a bacteria that causes brucellosis. Brucellosis causes abortions, infertility and lowered milk production in bison, and can be spread to humans.

“(This project) has allowed us to demonstrate that reproductive technologies can be used as a disease mitigation strategy for genetically valuable bison, an element of the project which could serve as a model for other species,” Barfield said. “We are also engaged in interdisciplinary research thanks to a One Health Catalyst grant that we received last year. Colleagues in the Warner College of Natural Resources and at the Denver Zoo are looking at ecological and social effects of the bison reintroduction, respectively.”

The project was started to place the icon of the American West back on to its native grounds, including cultural and conservation benefits. The City of Fort Collins and Larimer County had the idea to reintroduce bison into the Soapstone Prarie, and the U.S. Department of Agriculture housed the ten bison in quarantine on the CSU Foothills Campus.

“It has … provided a way for the people in and around northern Colorado to engage with this iconic animal at a time when it is has received a lot of national attention; it was named the national mammal earlier this year,” Barfield said. “And, … it is important to Native American communities in this area to see this animal coming back to an area that is historically relevant to them.”

On Tuesday, Nov. 1, the Native American Cultural Center had a celebration for the project’s success and the Laramie Foothills Conservation Project team discussed the updates on the herd, what has been going on for the past year, and talked about plans for the future.

“We look forward to seeing the people of northern Colorado out there enjoying this beautiful space that we now share with bison again,” Barfield said.