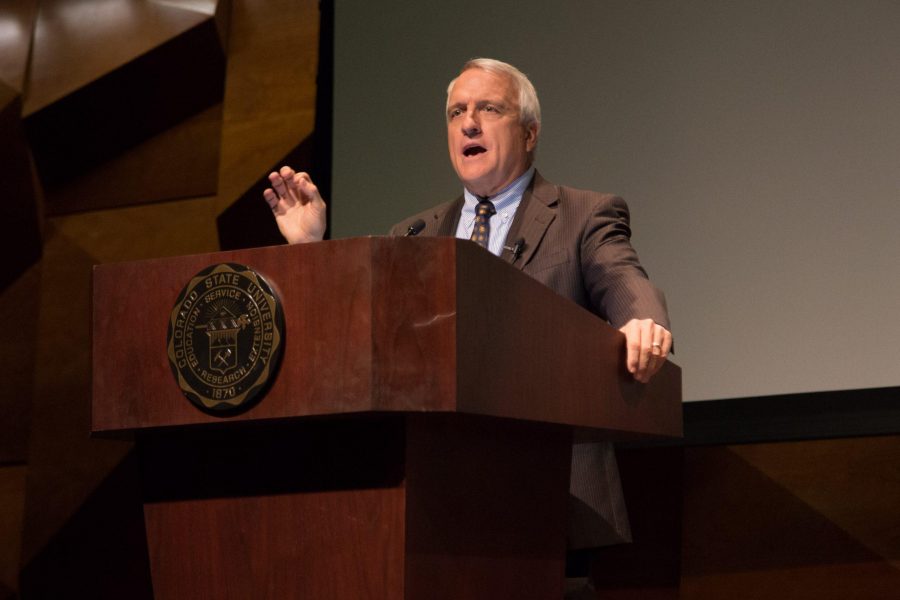 Bill Ritter Jr., director for the Center for the New Energy Economy at CSU, spoke on Monday about the clean energy initiatives that are being developed and implemented throughout the U.S. in the Lory Student Center theatre.

His speech entitled “Powering Forward: America’s Energy Revolution” focused not only on the legislative concentrations of clean energy but also the social justice issues surrounding the change.

Around 50 people were in attendance for the presentation, which was started off with an introduction by CSU President Tony Frank.

Ritter, having previously been both Denver’s District Attorney and Governor of Colorado, spoke on his own governing experience and various efforts to induce a greener economy and environment.

When establishing the new center at CSU, Ritter said he drew upon his own experience as governor for guidance. While he was governor, he passed through 57 different clean energy bills in the state of Colorado, Ritter said.

When the opportunity arose, Ritter went to U.S. senate committee hearing to speak on the environmental changes he felt were greatly needed throughout the United States, but the congress was deadlocked in their opinions, Ritter said.

“It was like they were saying there were two types of people in this world and you’re not one of them,” Ritter said.

He found that national energy policy was not going to be implemented, so he joined with Frank to establish the center where they would work with the states to bring about change.

“This is where we should devote ourselves to the kind of policy work that can be done in the present political situation in congress,” Ritter said.

He focused on how to transition energy systems, the economic implications and how to address the environmental triggers. He called these the main points the “3 E’s.”

Ritter went on to explain the first big project the center undertook that occurred for the White House. The meeting, organized by President Barack Obama, was to discuss the a new environmental agenda for the country, which was being held back by Congress and their stale mate.

“So, I met with the president, and after that there was a request from the White House that CSU undertake this endeavor of renewable energy: Energy efficiency, alternative fuels for vehicles, new business models for the 21st century, and to look at natural gas,” Ritter said.

To overcome the stalemate of congress he pulled in people and businesses from both sides, naming the official document “Powering Forward,” Ritter said.

He said he approached the western governors to try and convene the west for this clean power plan and found it interesting that he was able to have a constructive conversation with republicans and democrats.

The governors discussed how the states wanted to initiate a green plan while helping the people in their states who depending on the non-clean energy for employment purposes.

The concerns the governors faced in states such as Wyoming, where coal mining has been in generations of families as their main employment, in which the clean energy solution would put these citizen at a disadvantage, Ritter said.

Ritter then went onto discuss the new clean energy standards that have been effective in implementing change such as the wind farms in Colorado which have increased sustainable energy to 30 percent.

Ritter further elaborated on his perspective with two main questions that were on his mind concerning the implementation of the green energy in which he could use to find common ground with both parties.

The first of which discussed his hope in the new technology that currently is being developed which can decarbonize fuel in order to reduce car emissions, Ritter said.

The second of which discussed the justice issues surrounding the change in environmental policies including both those with energy.

“People will have to migrate away from their homes due to rising tides, and there are many people who live in very migrant climates whose agriculture will be greatly influenced by less rain and rising heat,” Ritter said. “The people who will be hurt the worst are those who didn’t contribute very much to the problem.”

He then went onto explain his time in Zambia, Africa where he experienced the injustices of those who didn’t have access to energy, in which he felt energy should be expanded to meet their needs.

“(Energy) impacted their education levels, their ability to study when the sun went down, and their level of health and well being,” Ritter said.

Ritter explained that he felt that energy needed to become green and expand to cover the injustices that persist currently.

Ritter ended his speech by summarizing that to effectively establish green policies to have a impact on the environment, it would have to be both a political and economic effort that address all the opportunity costs.

Following the lecture the audience participated in a Question and Answer section with Ritter in which clean energy implementations were further discussed.