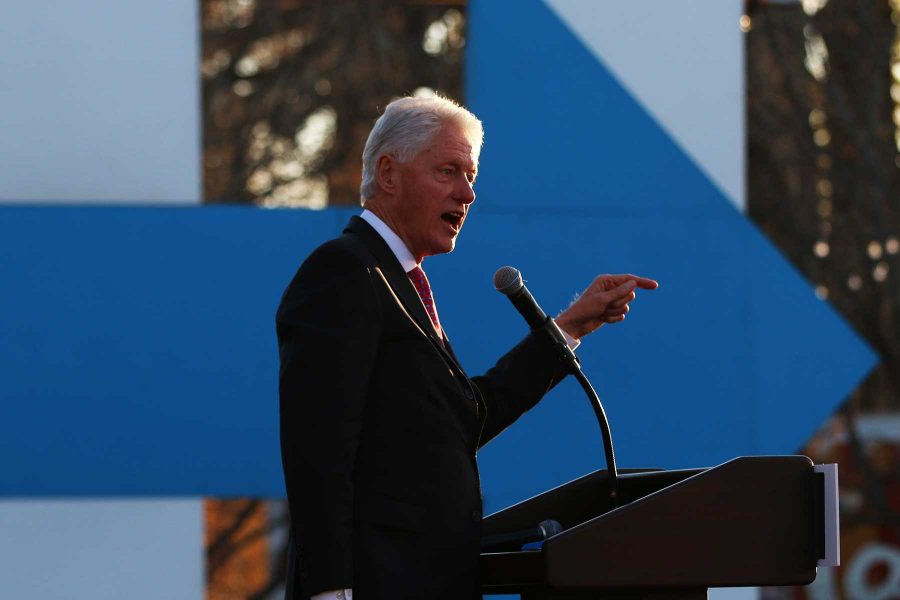 Bill Clinton holds a Get Out the Vote Rally on behalf of his wife Hillary Clinton at New Belgium Brewery on November 4, 2016. (Elliott Jerge | Collegian)

Former President Bill Clinton spoke to roughly 2,500 Hillary Clinton supporters at a “Get Out the Vote” rally in Fort Collins Friday.

The outdoor rally was hosted by New Belgium Brewery.

“This has been kind of a crazy election, would you agree with that?” asked Bill Clinton.

Crowds cheered in agreement at Bill Clinton’s opening words for his “Get Out the Vote” rally at.

The former president made a stop in Fort Collins after stopping in Pueblo and Denver earlier in the day to discuss Hillary Clinton’s policies as well as encourage voter participation.

Across the street from the outdoor venue, around 10 Trump supporters and a group of 20 anti-Dakota Pipeline protesters yelled and held signs. The Clinton supporters were also joined by a small plane that circled overhead with the words ‘Go Trump’ on the wings.

Devin Parker, a Dakota Access Pipeline protester said those protesting were interested in communicating the importance that will come from the DAPL decision.

“We are hoping that (Hillary Clinton) will put a stop to the pipeline,” Parker said. “If she is elected, she will be responsible.”

The former president began the rally by talking about the mission the government need to pursue in an interdependent state.

“We must maximize the promise and minimize the problems of the world we live in,” Bill Clinton said.

Clinton went on to discuss numerous points of Clinton’s policy agenda. One prominent topic discussed throughout the rally were economic changes.

Clinton put emphasis on the importance of a ‘bottom up’ economy, small businesses, developing a ‘main street’ economy, and steps towards new loan plans for college students. Although the economy and money allocation was widely discussed, all points were describing the importance of addressing and fixing infrastructure within society.

Although it was infrastructure as a whole that was discussed, the job force and small businesses were the major themes that carried on throughout.

“This is a country that works best when everyone has experienced the middle class, when the middle class means something, and when the poor have an honorable way to to move up,” Bill Clinton said.

The subject of the second half of the rally shifted to education. Clinton touched on the agenda for loan refinancing and making college affordable to all students. He also spoke on social issues that have been prominent the past couple of years such as police brutality and healthcare.

“What we need to recognize is the fact that there are viable people in our community in homes that cannot support them who do not have access to comprehensive health treatment,” Bill Clinton said. “We need a minimal healthcare system.”

Although Hillary Clinton’s future presidency plans were thoroughly discussed, the point of the rally was to encourage people to vote since the elections are only four days away. He ended his speech by telling the crowd to ignore the negative comments and ‘poison’ that has been present throughout the elections.

“If you haven’t voted, vote,” Bill Clinton said. “If you have voted, get someone else to the polls. These next four days, don’t give up and getting anybody to vote.”