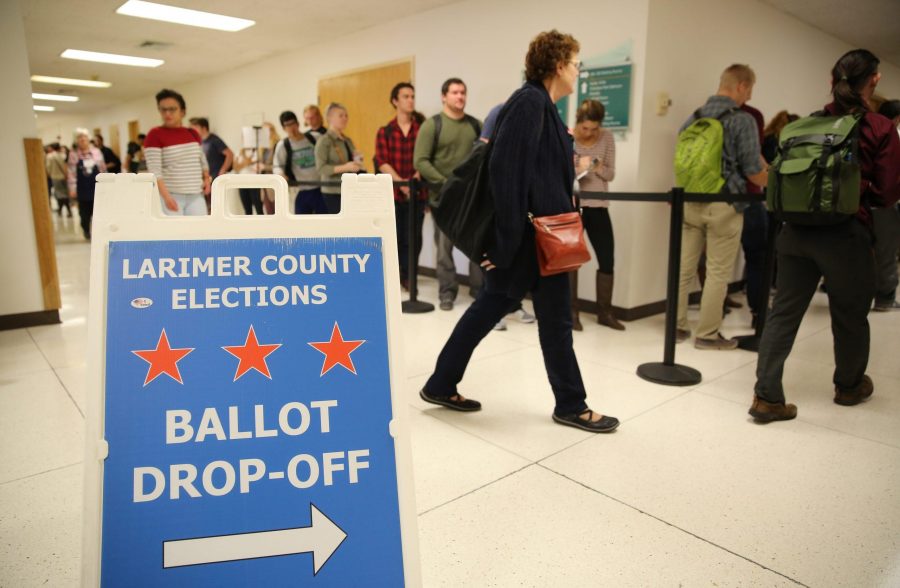 Signs showing where and how to vote in Larimer county are seen at the Lory Student Center on Tuesday, November 8th. (Forrest Czarnecki | Collegian)

With the 2016 presidential election just hours away, here is a timeline of major events over the last few years this election season.

Business giant Donald Trump declares his candidacy for presidency of the Republican Party.

First Democratic debate is held in Las Vegas, Nevada February 18, 2016. Pope Francis criticizes Donald Trump, suggesting that wanting to build a wall is “not a Christian,” and received backlash from Trump.

A Black Lives Matter protester called out “I’m not a super predator Hillary!” at a South Carolina fundraiser in response to remarks she made in 1996. The candidate was forced to respond and told the Washington Post “Looking back, I shouldn’t have used those words, and I wouldn’t use them today.”

First ever nationally televised Libertarian presidential debate is hosted by John Strossel and airs on Fox Business Network June 2, 2016. Donald Trump said judge Gonzalo Curiel, who was the judge ruling over the case of Trump University, would not be able to rule fairl because he was of Mexican Heritage. The judge was born in Indiana.

After an investigation of at least 33,000 of Hillary Clinton’s emails, FBI director said that the candidate had shown “extreme recklessness” regarding the misuse of her personal email server, nonetheless, Comey said that “no reasonable prosecutor” would bring charges against her.

After having lost the Democratic nomination, Bernie Sanders endorses Hillary Clinton for Presidency.

Donald Trump suggests gun supporters could kill Hillary Clinton to prevent her from picking the supreme court justices. “If she gets to pick her judges, nothing you can do, folks,” Trump said. “Although, the Second Amendment people – maybe there is. I don’t know.”

Hillary Clinton Calls Trump supports a “basket of deplorables” during a fundraiser in New York City.

Hillary Clinton is seen to buckle at her knees and carried into a car at the 9/11 memorial service in New York.

First presidential general election debate was held at Hofstra University in Hempstead, New York. Hillary Clinton takes majority support after the debate. Trump admits he had managed not to pay federal income tax for almost two decades. Trump, unlike Clinton and his running mate Mike Pence failed to release his tax returns and claimed his lawyer had instructed him not to release them.

The vice presidential debate was held in Farmville, Virginia.

Tapes are leaked from Access Hollywood showing Donald Trump and Billy Bush bragging about sexual assault in 2005, negatively effecting Trump in the polls 7 percent behind Clinton. The video prompted sexual assault allegations from more than a dozen women, all of which Trump denied.

He threatened to sue the women and media outlets that published the claims after the election was over.

The third and final presidential general election debate was held at the University of Nevada, Las Vegas in Paradise, Nevada.

James Comey announces that the FBI will be restarting the investigation into Hillary Clinton’s emails.

Women accusing Trump of child rape comes closer to speaking publicly. A woman in her mid-30s said Trump raped her at a billionaire party. Her lawyer claimed that she feared for her life.

James Comey tells Congress there is no evidence in the emails that Clinton should face charges over handling of classified information.

Collegian Reporter Tony Villalobos May can be reached online at news@collegian.com or on Twitter at @TonyTheGnarly