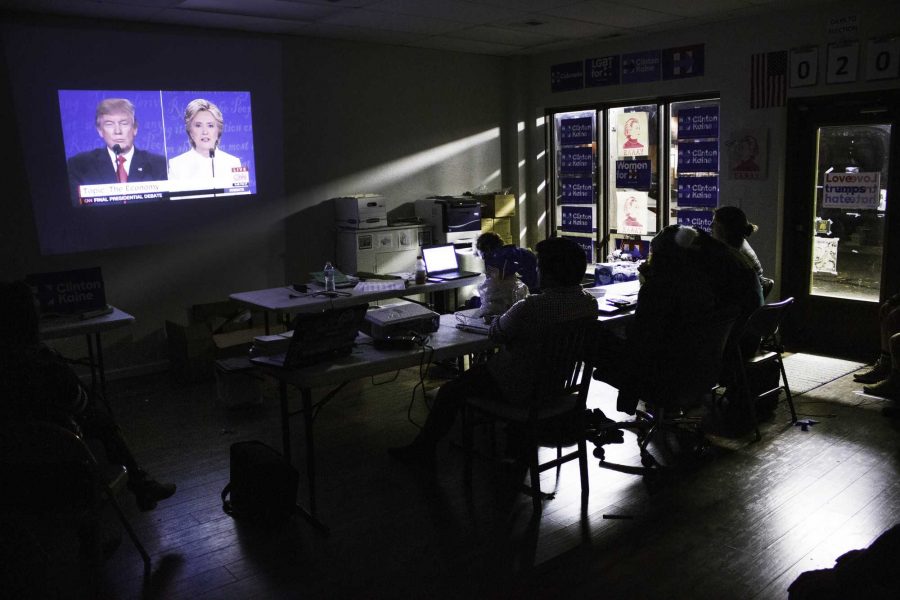 The two leading candidates for the President of the United States, Democrat Hillary Clinton and Republican Donald Trump, took to the stage for the third and final time Wednesday night on their quest for office, moderated by “Fox News Sunday” anchor Chris Wallace.

The debate covered topics relevant to becoming president, but also delved into questions regarding the scandals that have followed both candidates throughout their campaigns.

Some of the topics discussed were appointments to the Supreme Court, the Second Amendment, abortion, Medicare and Social Security funds, immigration, the economy and international hot spots.

One of the later questions asked of Trump was whether he would accept the result of the election if he lost.

Recently, he has repeatedly said that the election is being rigged in Clinton’s favor, leading to his running mate Mike Pence coming out on Sunday to say that they would definitely accept the result of the election.

The first question of the night pertained to the Supreme Court, and how each candidate wants justices to affect the country.

Another focus was on the economic plans of the two candidates, and how they would improve the economy.

Trump said that his plan would involve a lot of free trade, and that the country would have much more free trade than it does today.

Trump continued his economic policy proposals by referencing his business.

“If we could run this country the way I’ve run my business, you would be so proud,” Trump said, adding that even Clinton would be proud of him.

Clinton had a much different plan, with hopes to keep working people from living below the poverty line and investing in the middle class.

“When the middle class thrives, America thrives,” Clinton said. “(We will) raise the minimum wage, because people who work full time should not live in poverty … (and we will) make public college debt free for families making less than $125,000. We invest from the middle out, the bottom down, not the top down.”

Then, the two were asked why they are fit to be President, despite the allegations against both of them. Candidates delved into a discussion of the accusations of rape and sexual assault against Trump in the past weeks.

Trump claimed the allegations were debunked, and said he believes Clinton got them to step forward. He said if it was not her to ask them to come forward, then he claimed they came forward to get ten minutes of fame.

“Donald thinks belittling women makes him bigger… (but) it’s not just about the women; he never apologizes for anything,” Clinton said in response to his denial of the accusations.

Moving on to the national debt, moderator Wallace asked why both candidates are sticking with their plans when both would increase the national debt’s percentage of the GDP from anywhere between 86 percent and 105 percent.

Trump replied by saying that he would bring the nation’s GDP up from 1 percent to 5 percent, and that he would not use political hacks to negotiate trade deals.

Clinton said her plan would not add a penny to the national debt, and that she wants to invest in the people of the country and their families.

The final question of the night involved Medicare and Social Security, and how each candidate would approach both entitlement funds running out in the 2020s.

Clinton responded by claiming she would expand benefits.

“We need to put more money in the Social Security fund… I will not cut benefits, I will improve benefits.”

Leading into the debate, Clinton led in nearly every general election poll, with leads ranging from 3 percent to 9 percent. Trump was ahead in just one of the polls compiled by RealClearPolitics, and was leading by one point.

In Colorado, a RealClearPolitics poll average had Clinton leading Trump by 8 points, 46 to 38, compared to earlier this month when they were tied at around 44 percent of likely voters each.

Election day is on Tuesday, Nov. 8. There are five Voter Service and Polling Centers in Fort Collins:

Other ballot drop-off locations can be found on the Larimer County website, larimer.org