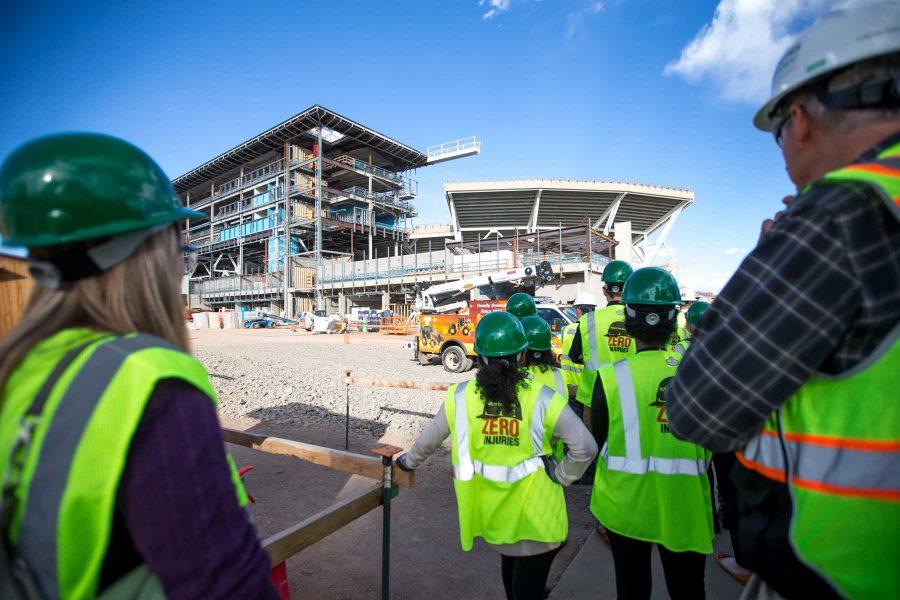 A view of the stadium construction from Lake Street. Photo: Abbie Parr

While the on-campus stadium is still undergoing construction, members of the student fee review board got a glimpse of the new stadium on Oct. 10.

The tour reviewed construction progress and members learned about special stadium features. Lead member of the Icon Venue Group, Dan Loosbrock, said the stadium is expected to be completed in June 2017.

To start off the tour the CSU athletic director, Joe Parker, reminded the student board that the stadium is not built using student fees. Parker said this is a common myth that has been known to give the project a negative connotation.

The group walked up a ramp into the stadium’s standing room only area, where Parker presumed to explain the new layout.

” … Student seating will be just like how it is at Hughes,” Parker said.

According to Parker, the lower level on the east side will be student seating, and the band will be in the north east corner. The student section will have about 10,500 seats.

He explained the new features of seating for alumni that are unique to the new stadium. He said the mid-field area is a club level, which can host 600 people on a game day. There will also be two club sections, which hold 800 seats. The open concourse will feature concessions and restrooms. On the second level there will be 43 outdoor box spaces which can accommodate 4-6 people.

Parker said there will be retail spots around the stadium, including the New Belgium porch with three terraces that serve drinks and food.

Loosbrock provided the group with insight on the construction process.

“The whole building is actually designed in three dimensions prior to anything going into place,” Loosbrock said. ” … So we have onsite workers who coordinate with our design team … allowing for a higher quality process.”

The group then proceeded to the first floor on the north east side of the indoor part of the stadium, where Loosbrock explained the future plans for the space.

“TiLT will combine to one department and all there offices will be located here,” Loosbrock said.

The indoor section of the stadium will hold 9 general assignment classrooms (there also will be) classrooms. A total of 7 out of 9 classrooms have a capacity of 35 students, 2 will hold 100 students.

Moving onto the outside of the stadium on the north-east side, Loosbrock explained the new alumni center and heritage hall.

” (The) Alumni center will have offices for their staff, but also an event space which will be available for different seminars, events, and business meetings,” Loosbrock said. “There also will be heritage hall with interactive and static graphics to tell the story of CSU past and future.”

Additionally, Loosbrock said there will be a video wall on the stadium itself which will have the game feed on game days.

The front of the stadium, located on Pitkin Street, will be lined with bricks which will have the names of donors. Loosbrock he hopes this will instill a sense of community and unity not just on game day.

Moving on the group also saw the strength training room which was ahead of schedule and nearing completion, as well as the plan for a art ceiling installation of a large ram logo.

The student review fee board asked about the environmentally friendliness of the stadium, since CSU is known for being so green.

“It will be lead certified, we are working for silver,” Loosbrock said. “There have been a couple things, I think the water fixtures and the bathroom fixtures were target with around 30 percent less water then a typical design … LED sports lights… 40 percent reduction in energy use.”

Tristan Syron, a sophomore history major and Student Review Board member, supports the construction of the stadium because he believes it will help student enrollment.

“I think that when we are looking to adding it to the university on campus there are several factors we need to look at,” Syron said. “First is how does it help with enrollment? I think that is one of the main reasons they built it. (To) get the enrollment with the ten year plan that says we should be increasing CSU enrollment.”

He also supports the stadium to cover safety concerns.

“There is a safety concern since people get really … intoxicated on game day and I think it is a danger to put it way over there [Hughes location] and say ‘hey if your’e in the dorms you have to walk home, you have to get on this bus,'” Syron said. “So I think we eliminated a lot of those risks especially for the freshman class.”

Stephanie Yassa, a junior health and exercise science major and student fee review board member, said while she is supportive still has concerns.

“My biggest concern is parking…. but I am overall super excited about the new stadium and the fact that we get to see it first,” Yassa said.