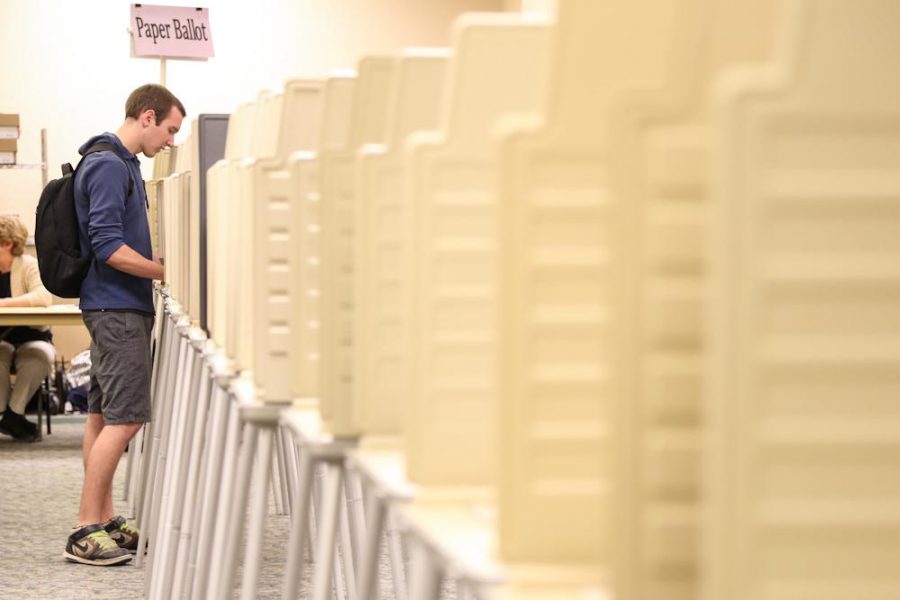 Senior mechanical engineering major Nate Sherman votes in the North Ballroom of the Lory Student Center Monday afternoon. Early voting began yesterday in the LSC and is open from 8 am to 5 pm until next Friday, November 2.

Proposition 108, known as the Unaffiliated Elector Initiative, is an initiated state statute that will appear on the 2016 Colorado election ballot.

Proposition 108 would allow independent Colorado voters to vote in a major political party’s non-presidential primary election without requiring voters to proclaim an affiliation with a political party.

Proposition 108 also allows political parties to choose not to hold a primary election open to unaffiliated voters. Political parties instead could choose to nominate a candidate by assembly or convention that is limited to voters affiliated with that party.

Additional support for the proposition states that, since one-third of all registered voters in the state are unaffiliated, they result in candidates that better represent Coloradans.

Selena Aguiniga, a first year biology major, said that Proposition 108 would allow independent voters the opportunity to exercise their right to voice their opinions in the primaries.

Arguments against the proposition state that allowing unaffiliated voters to participate will result in about 7 percent of the ballots not being counted. This would affect the winners of the election and increase the cost for taxpayers since counties have to must produce separate combined ballots for unaffiliated voters.

Unaffiliated voters can also participate in a political party’s primary election by changing their political affiliation at any time before and on election day, arguments against the proposition state.

Colorado currently has a closed primary system, so only registered party voters can participate in a specific party’s primary. Primaries in Colorado convened to elect party nominees for state, county and federal offices other than the presidency also currently do not allow unaffiliated voters to participate.

Political parties that are not classified as major parties, such as the Green Party and the Libertarian Party will also be included on the combined ballot. A minor party, however, may choose to exclude unaffiliated voters from voting in the primary election and only allow voters affiliated with that party will receive the ballot. The exclusion of unaffiliated voters only applies to primary elections of minor parties.

Collegian Reporter Haley Candelario can reached at news@collegian.com or on Twitter @H_Candelario98.