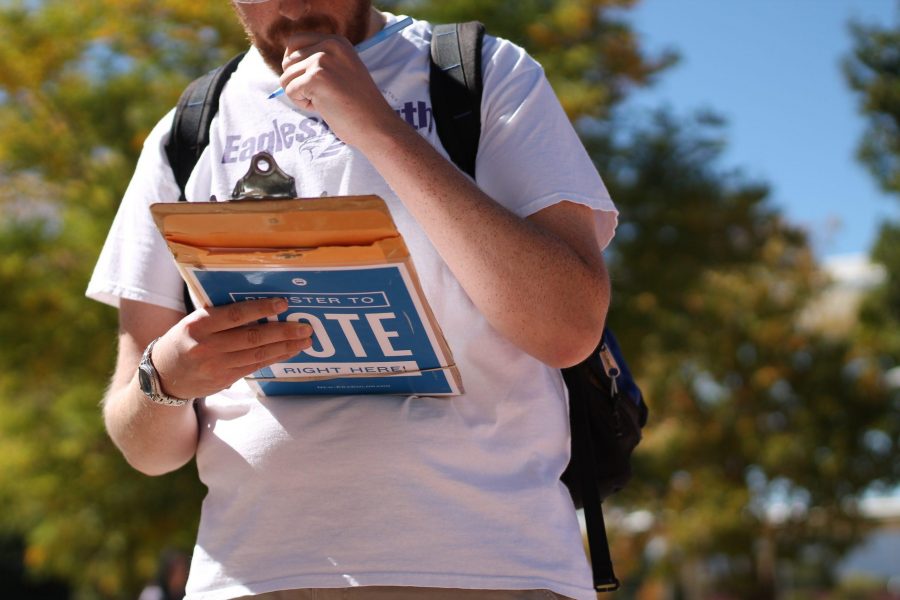 A New Era volunteer asks students if they are registered to vote in the plaza. (Natalie Dyer | Collegian)

Colorado’s participation in future presidential elections is up for vote on this year’s ballot.

Proposition 107 is a measure supporting the restoration of presidential primary elections in Colorado.

Currently, Colorado runs on a caucus system which allows only registered affiliates of parties to vote. The caucus system differs from the primary system in a big way; voters must attend meetings in their precinct and congregate in groups sorted by candidate.

During this process, delegates can attempt to sway voters to join their group before an official tally is counted. The candidate with the majority of voters wins.

The primary system, which Proposition 107 is would restore, is a simpler system, similar to the ballot system used in general elections. Voters choose a candidate on a secret ballot, and the candidate with the most votes wins.

A key difference between the two systems is the involvement of independent or unaffiliated voters.

In the caucus system, independent voters who are unaffiliated with either the Democratic or Republican parties have up to two months prior to the caucus to change their status, or risk being unable to vote for the party of their choice.

The change to a primary system would not have those same restrictions, allowing undecided voters to cast a ballot in the primaries for whomever they choose.

According to the argument for Proposition 107 in Colorado’s guide for this year’s election, voters would be better served using a primary system.

The argument for Proposition 107 revolves around the confusing nature of the caucus system, the inability for unaffiliated voters to participate and the protection of voter confidentiality. The reintroduction of the primary system would eliminate all three of these concerns.

Arguments against the measure note that the ballot system introduced by primaries might result in confusion if unaffiliated parties vote for multiple candidates and skew election results.

The argument against the measure also notes a rise in cost to taxpayers, who would have to foot the bill if primary voting is reintroduced. Caucuses are funded by political parties, not the state, and the change would add several million dollars to the state’s budget every four years.

A “yes” vote would restore the presidential primary elections, while a “no” would keep the current system in place.

Proposition 107 is on the ballot November 8th.

Mail in ballots were sent to voters beginning Oct. 17. Voter registration for mail in ballots has ended, but those who are unregistered can register and vote in person. Ballots are due by 7 p.m. Nov. 8.