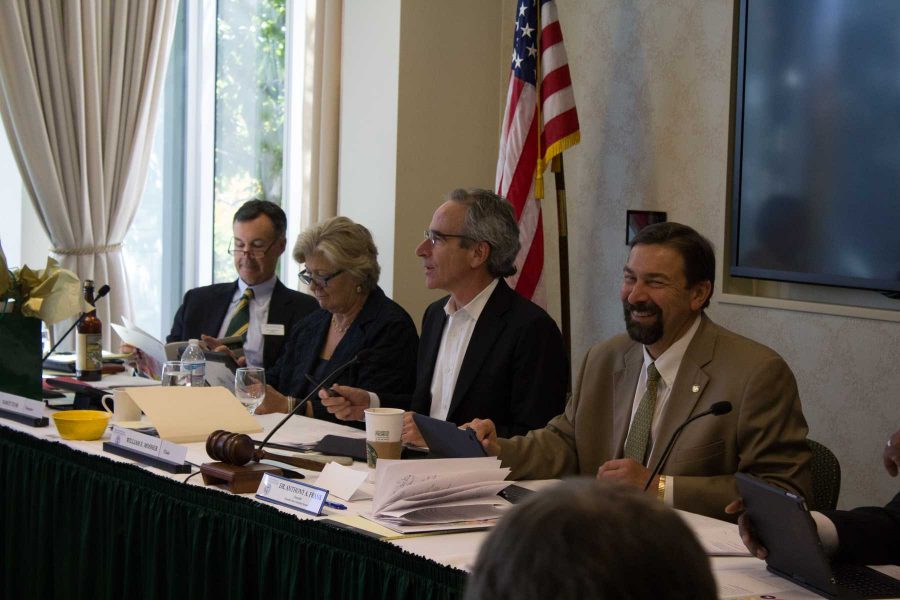 Tony Frank laughing at the beginning of a Board of Governors meeting session. (Tony Villalobos-May| Collegian)

Colorado State University considered raising resident undergraduate tuition by 3 or 5 percent on Thursday during the CSU Board of Governors meeting in the Lory Student Center.

In anticipation of no change to state funding of higher education, the board was presented with two different scenarios for changes in resident undergraduate tuition—both increases.

If the board chooses to raise tuition for resident undergraduates, with no change to current state funding, students taking 15 credit hours could face a hike of $164 or $274 per semester in base tuition.

Base Tuition per semester for 15 credit hours: no change to state funding

*this model does not include student compensation from the Colorado Opportunity Fund.

*Per semester, based on 15 credit hours, does not include Colorado Opportunity Fund stipend

According to the preliminary FY18 incremental Education and General Budget, CSU would gain about $7.4 million in resources if tuition increases 5 percent.

Total resources by change in tuition and state funding:

*based on preliminary documents presented to the Board of Governors.

In addition to the uncertainty regarding state funding, CSU is preparing for a change in compensation if Colorado’s amendment 70 passes. Amendment 70 would increase the state’s minimum wage to $9.30 per hour.

At CSU, there are 2,738 people working below the proposed minimum wage. Increasing the minimum wage would cost the university approximately $689,278.

The amendment lays out a plan to slowly increase the minimum wage over time, from $9.30 to $12. The first level, $9.30 per hour, would go into effect January 2017. Then, the minimum wage would increase by 90 cents each year until it reached $12.

The University expects to know more about contribution by the state to higher education by February, and Colorado citizens will vote on Amendment 70 on Nov. 8.