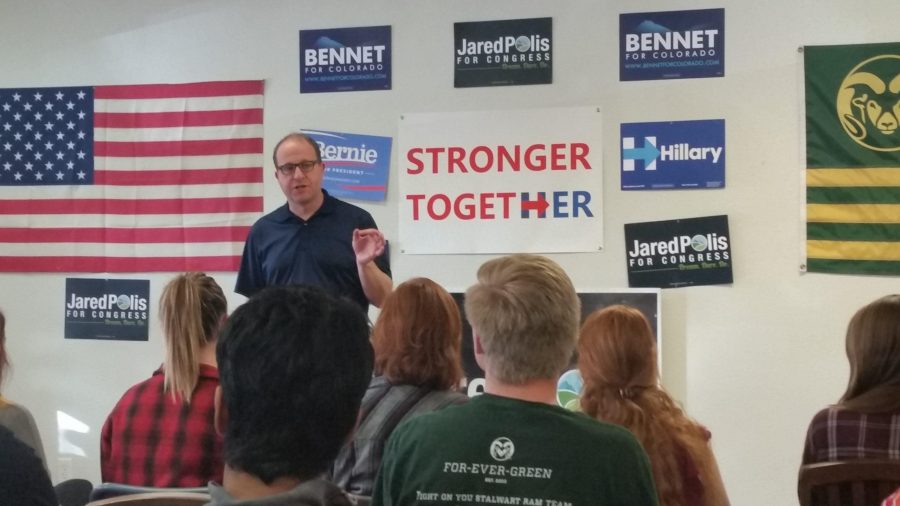 Polis is the incumbent in Colorado’s second congressional district, which includes Boulder, Vail, Thornton, and, as of 2011, Loveland and Fort Collins. He was first elected to the legislature in 2008, and serves on several committees in the House, including the Committee on Rules and the Committee on Education and the Workforce. As the first openly gay parent to serve in Congress, he is co-chair of the LGBT Equality Caucus.

“Polis’ top priority is ensuring that all Americans regardless of geography or economic background receive a world-class education,” according to his official biography. Polis believes education ” … is the single most meaningful investment America can make in its economic future and in its people.”

Polis began the evening with a speech about Donald Trump and the effects he would have on this country as President.

“This is a very high stakes presidential election,” Polis said.

Polis said Trump’s insults are “beyond presidential,” and “nothing that Romney, McCain, or Bush ever did, and not something that a Democratic candidate has ever done.”

He followed up by saying that Trump’s only real policy, other than building a wall at the Mexican-American Border, is “wild inconsistency,” whereas Democratic presidential candidate Hillary Clinton has “well hashed out polices” and “lots of consistency.”

Polis said the plan would allow students and college graduates to refinance their student debt at much lower interest rates than they can now.

Polis also explained his plan to decrease the prices of textbooks so that students would not have to pay so much during college, which would result in more debt afterwards.

He said he supports open source textbooks, which, according to Student Public Interest Research Groups, are “complete digital textbooks that are accessible online at no cost, and . . . are affordable to purchase printed as a book.”

Open source textbooks, he said, would not result in not having physical books, but could result in them being only $10.

When asked about the heavy involvement of money in politics, and how he plans to fight it, Polis talked about two policies that he said most Democrats support.

The bill was passed by the House of Representatives 219-206, but the Senate failed to pass it before Congress had recess.

He also said that most Democrats support establishing a law that would allow $50 that is donated by an individual to a political campaign to become a tax credit for that individual. Legislation similar to this already exists in 4 out of the 50 states: Oregon, Ohio, Virginia, and Arkansas.

Polis explained that both of these are meant to combat Citizens United v. Federal Election Commission, a landmark 2010 Supreme Court case in which the Court ruled that unions and corporations are allowed to make private expenditures in political campaigns.

He also supports the idea of a constitutional amendment that would overturn Citizen’s United v. Federal Election Commission.

The congressman then moved the event forward by circling back around to Trump, but also to drive home a point about not voting third party as a “protest vote”. He asked the audience to tell their friends that are planning a protest vote to “actually look into [the] person and what they want and what they have said.”

“You’re never going to have candidates that you agree with on every single issue,” Polis said. “You’ve got to support, at the end of the day, the person you trust to be President of the United States.”

Collegian Reporter Stuart Smith can be reached at news@collegian.com or on Twitter @notstuartsmith.