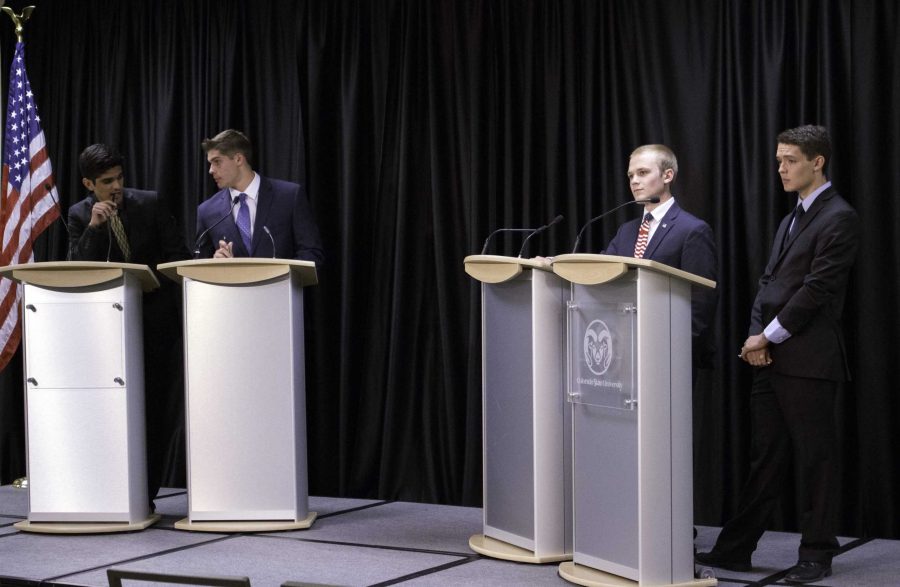 Two representatives were present for the progressive side, PJ Seel and Tyler Siri; both are members of Rams for Progress. Two representatives were also present for the conservative side, Joel Crank and Juan Caro; both are members of the College Republicans. Juan Caro was chosen to debate about an hour before the event started, as Sara Andreas, College Republican President for CSU, was ill.

The debate was moderated by ASCSU.

On social issues, the students discussed institutional racism in the criminal justice system and pathways to citizenship for illegal immigration.

In response to a moderator question about what should be done about the rising racial and socioeconomic tensions across the United States, conservatives responded that violent protesting was not productive.

“The racial tensions we have seen in America is absolutely out of control … This is not social justice, this is anarchy,” Crank said. “Is racism better or worse today?”

Progressives said that education would be key to resolving tensions across the United States.

Crank said he believes there is a need to get individuals off of the street and into jobs.

Seel said that all illegal immigrants should be given amnesty.

In response, conservatives said illegal immigrants should be given the right channels in order to become legal.

“We would want people who obey the laws,” Caro said.

“They come to this nation to do work,” Seel said.

On national security, both sides agreed that Edward Snowden should be brought back to the U.S. and given a fair trial. The progressives labeled Snowden a whistle blower.

“I don’t think (the government’s response to Snowden) was addressed in the correct way,” Caro said.

Crank read off a list of what is ongoing in the Middle East in response to what the biggest external threat to the U.S, and said that bad people must be prevented from entering the country.

Conservatives said the country needs to fight to win when it comes to war, and that Iraq and Vietnam were lost because of the lack of the fight to win.

“North Korea has been a thorn on the side of freedom,” Caro said in the conservatives’ final response.

Climate change poses the biggest external threat to the U.S., according to the progressives. Siri said that the Pentagon is on their side.

“Nuclear weapons should not be an option for any, any country,” said Siri as a final remark.

“Standardized testing is not the way we should be doing our education,” Seel said.

However, Seel also said a national standard is important for colleges, as it would decrease the disparity he feels is currently present between states.

“This isn’t something that our nation should be pursuing,” Seel said in response to a question about vouchers for public funding to be put towards private schooling. “We should be working to make sure our tax dollars are well used,” Seel said.

However, conservatives responded with praise for the voucher system.

“I think that the voucher system’s great,” Caro said. “My taxes, my choice.”

“(A voucher system) will allow them to attend these prestigious universities,” Crank said.

Then, the moderators asked about the current state of student debt.

“We need to start reinvesting in higher education,” Siri said.

Conservative representatives responded that there is a monopolization of four-year universities, and questioned the ability of the government to fix higher education.

“How are we going to pay for that?” Caro asked as the moderators called time.

The moderators asked the students about tax restructuring, the unemployment rate and raising the minimum wage.

“Our taxes should not be used for subsidies or welfare,” Crank said. “Honestly, the free market is something that gives nothing but opportunity… Capitalism provides for ingenuity.”

In response, progressives said that the U.S. may not have a fair economy.

“The U.S. is now suffering from a monopolization of industry,” Seel said. “We need to look at how to trust bust certain corporations.”

Both sides were asked about raising of the minimum wage. Conservatives responded that the federal government should not be involved.

“It hurts the poorest people in America when the minimum wage is raised,” Crank said.

Progressives said there is a lot of misinformation going out about the minimum wage.

“We can’t always trust states to raise minimum wage,” Siri said, “It is not a living wage.”

At the end of the moderated debate, each side asked the other one question. The progressives posed their question to the conservatives first: Should we end the war on drugs?

“(The war) only punishes those who partake in drugs,” Crank said.

Caro said it is a complicated issue because of a range of drugs exists. He does not view it as a racist war or issue. Caro feels the war on drugs wastes taxpayer money.

“Everybody seems to be doing drugs,” he said. “It is a failed government program.”

Progressives were allowed a rebuttal for their question.

“This is a racist war,” Seel said.

He explained that usage rates are similar between whites and blacks, but that more people of color are still imprisoned.

The conservatives asked the progressives if they feel Amendment 69 will benefit Colorado.

“We do need to have still on-going reforms,” Seel said.

Both progressives said a single-payer health care reduces cost overall, but that Amendment 69 did not give enough specifics. Siri said that the government can still do more good than the free market.

“Sounds like a terrible idea to me,” Caro said in rebuttal.

An audience member asked progressives if they feel groups like Black Lives Matter help or hurt the social justice movement.

Progressives said Black Lives Matter exists because of unfair treatment and distrust that has been building for decades. Seel emphasized that prejudice has been directed towards the group.

In rebuttal, Crank said there is an implication that a large population believes Black lives do not matter. He said that is untrue.

Audience members asked follow up questions regarding immigration, the war on drugs and Brexit. Laughter occurred when someone asked each side to state something they agree on.

“We are a campus of people who have very different ideas about politics, issues and about how we can solve those issues,” said Josh Williams, one of the moderators and ASCSU officer of governmental affairs. “I think that exposure is what we’re here for.”