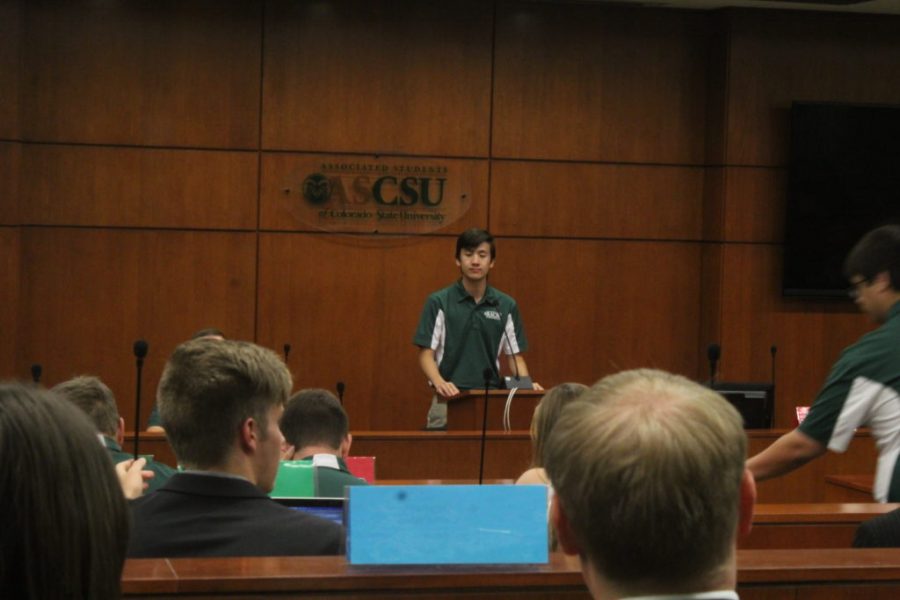 New Director of Diversity and Inclusion for ASCSU

Erin Vargas-Gutierrez was sworn in as the new Director of Diversity and Inclusion for Associated Students of Colorado State University by the senate Wednesday night.

Former Director of Diversity Marco Durazo stepped down from the position, after being appointed last May. Gutierrez served as the deputy director of diversity while he was in the position.

Durazo said he was grateful for the opportunity to serve in the position, and congratulated Gutierrez on her appointment.

“Being the director of diversity and inclusion was one of the most amazing experiences of my life,” Durazo said. “Social justice was always very important to me, and being put into a position where I was constantly learning from the experiences and philosophies of others was so enriching. Also, being under (ASCSU President) Daniela who was constantly striving to improve the department and make our office more friendly and welcoming was extraordinary.”

“Erin has knowledge on what Marco’s vision was for (the department),” Pineda Soracá said in regard to the projects Durazo had intended for diversity within ASCSU.

Durazo served as the director of diversity since May of 2016, but the position remained vacant for several months after his predecessor stepped down in February last semester.

There was no application process open for the position.

“(An application process) would just delay everything we’re trying to do this semester,” Pineda Soracá said.

A question and answer session was open for the floor during the senate meeting, but the senate asked few questions.

“I collaborate with a lot of different diversity offices,” Gutierrez said in response to a question about why she is qualified for the position.

After a blind vote, Gutierrez was sworn in.

“The Department of Diversity and Inclusion’s current initiatives align with the Pineda-Soracá/Lensky Administration platforms, and will continue to be implemented as a top priority throughout this administration’s entirety,” wrote Chrissy Vessa, ASCSU deputy chief of staff. “We appreciate the work that Mr. Durazo did on behalf of all students – he helped lay the foundation for this department and we are thankful for that.”

The positions are intended to provide better access to the student government’s resources for online students.

The organization, which allocates roughly $2.5 million in student fees each year, will spend $6,470 for video and audio equipment for the videography specialists to use.

The creation of the positions was as result of an agreement between CSU Online and ASCSU. ASCSU began receiving student fees from online students this semester.

“(The videographers) will really act as a tool box to express what you’re working on,” said Chrissy Vessa, ASCSU deputy chief of staff while addressing the senate body last Wednesday. “I do believe that the creation of this videography unit would increase the transparency of the organization.”

Videographer specialists will be responsible for audiovisual documentation of senate sessions. A total of $6,470 is earmarked for the expenses associated with the new program, which include stipends and equipment.

Applicants for the position are required to be enrolled in one on-campus or CSU Online credit at CSU and in good standing with ASCSU and CSU at the time of appointment.

Videography specialists are responsible for using media techniques to present ASCSU’s objectives. They are required to contribute a minimum of 15 hours a week, two of which must be within the ASCSU Office.

The positions will be under the legislative branch and the speaker pro tempore.

“It’s about access for students,” said Edward Kendell, ASCSU speaker pro tempore and author of the bill last Wednesday. “We have to represent that population (of online students) and they need to know what we are doing with their money every day we come to work.”

Bill proposed to establish Speaker of the Senate

A new piece of legislation was proposed Wednesday night that would create a new role for an elected official within ASCSU.

Currently, the Vice President of ASCSU is required by the constitution to oversee both the senate and the student fee review board. The bill would create a position, Speaker of the Senate, which would specifically oversee the senate.

“So that people that come later after us don’t have to go through the same kind of sleepless nights like we do,” said Edward Kendall, speaker pro tempore.

The gallery Wednesday night asked why a new role is necessary.

“We want to solidify that as something we value and respect,” Kendall said.

Kendall said that by having two strenuous jobs placed on the role of the vice president, historically, ASCSU has seen quality of life decrease. He said they want to see all members within the organization succeed.

Payment for the role of Speaker of the Senate is not specified in the current bill. Kendall said it would likely pull from base funding into the payroll line. With an increase in student enrollment, and therefore an increase in funding, he was unconcerned about covering the cost.

The Speaker of the Senate would be elected by students on the same ticket as the President and Vice President of ASCSU.