Students hold demonstration to promote an end to violence across America 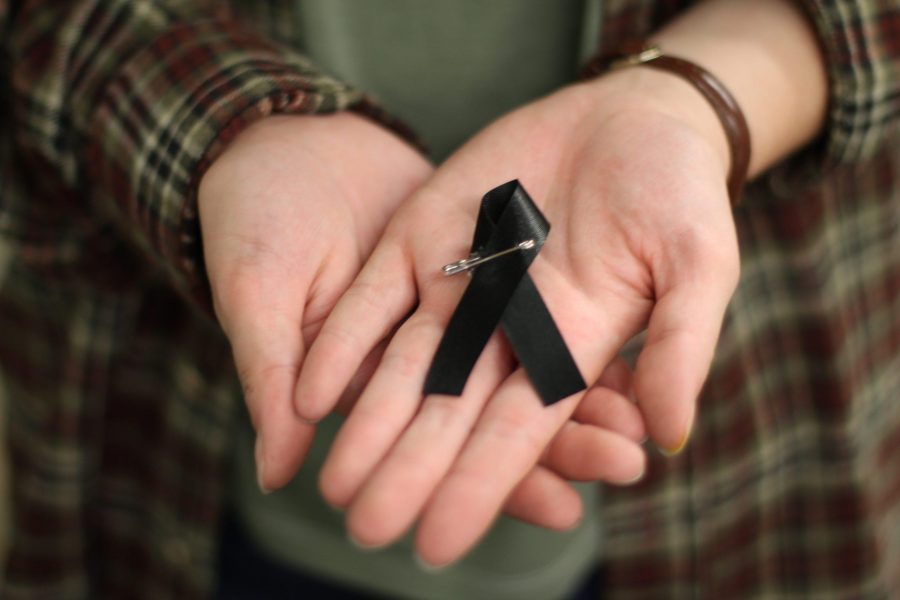 Around 20 students organized a demonstration to spread the message “Stop the Violence,” around 11 a.m. Monday on the plaza.

The demonstration was partially in response to the shooting in Charlotte, North Carolina last week, but students said it was an overall response to police brutality and violence around the nation over the past year.

Students brought handouts in support of the Black Lives Matter movement, and handed out black ribbons. They had a table with resources for those interested.

Black ribbons were handed out to other tables on the plaza, including both the Donald Trump and Hillary Clinton tables.

Members of the group held a larger cutout of a black ribbon on the plaza. They said their main purpose was to educate passersby about stopping violence and police brutality in America.

“I think that we’re all scared,” Cohn said.

She explained she came into class last week upset and explained to her class why.

The class is a social work class learning how to facilitate groups. When Cohn proposed the idea of a demonstration, her class wanted to show that there is community behind the movement.

“I’m scared and I have a daughter,” Cohn said.

Cohn stood on the plaza holding a sign that said, “Stop the Violence,” while her daughter played nearby.

She said that part of the purpose of the demonstration was to educate the public on how to be a peace officer.

Henry Seen, social work junior, explained each community has a peace officer. Peace officers are any government officials that enforce the law, but are not limited to police officers.

Seen said that if social justice is the nation’s main goal, then Black Lives Matter is the movement to get behind.

Seen said that it does not matter what color individuals are for, and that right now, the movement needs to be about black lives. He said that the U.S. is already fighting two other wars, and does not need a third.

“We don’t need a civil war in our own country,” Seen said. “(The movement is important because) we have way too much violence.”

The social work class was on the plaza to promote stopping the violence, according to instructor Pam Bishop. She explained her class was very passionate about getting out and ensuring all voices were heard. Bishop said it was entirely student planned, and she was there to support her class.

“Right now, the crisis is facing African-Americans (and the Black community),” Bishop said. “We want to support all people.”

Cohn and others led the organization of the event. Seen said that the group is hoping to host future events regarding violence and police brutality in America.