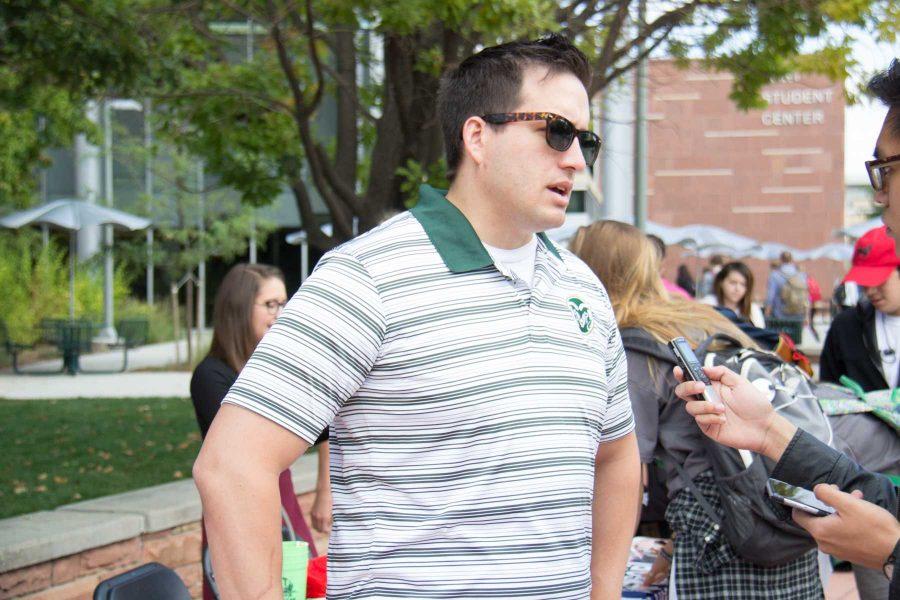 Morse focused his on-campus campaign on the issue of student debt.

“I want the CSU student to know that there are better ways to pay for their college tuition than what is offered right now,” Morse said.

Morse said he does not want students to be burdened with debt.

“My goal for how it relates to students on campus is to not have them burdened with debt until they’re forty, forty-five years old,” Morse said.

“One, I want to provide more alternative funding for craftsmen… that way, they can become a master craftsman or a master metal worker and open their business sooner without this huge bubble of debt,” Morse said. “Secondly, I want to provide students a pre-tax option to pay back their debt. That’ll save you fifty, sixty bucks when you pay back your debt. Third, I want to allow employers to match their payment, and that will help lower their tax burden as well, and get your debt paid off quicker.”

Morse said he feels that his three-fold approach to student debt is what contrasts him from Polis.

“His (Polis) focus is on open-source textbooks and lowering the costs of textbooks,” Morse said. “Whereas, my plan is if you’re putting value in yourself… then we need to get you out of debt faster.”

Polis introduced a bill in the house to provide open-source textbooks to students in 2015. The Affordable College Textbooks Act would create a grant program to provide textbooks available under an open license so that professors and students could freely access the material.

However, Morse said he does not believe lowering the cost of textbooks will have a large impact.

“Lowering the cost of textbooks, making them open source, doesn’t really do anything,” Morse said. “That’s like taking the garnish off the plate: the steak is still there.”

Polis also introduced the ExCEL Act with Richard Hanna (R-NY) last year, a bipartisan bill to tie student loan repayments to a percentage of the graduate’s income until the loan is repaid. If the ExCel Act, or the Earnings Contingent Education Loans Act of 2015, is passed, graduates would not make payments during periods of unemployment and would pay more as their incomes rise.

Morse said he hopes college students participate in the election process this year.

“College students could sling any election,” Morse said. “Let’s look at CU and CSU: there’s roughly 50,000 students that attend… If you want to have a voice outside of ASCSU (CSU’s student government) or the CU student government, you need to register to vote.”

Morse graduated from CSU in 2009 and worked as a marketing executive in the private sector. He received over 90 percent of the vote from republican delegates across several county assemblies April 8.

After @SenCoryGardner’s Monday meeting. We are happy to announce he has endorsed us in our race against @jaredpolis. #copolitics #GOP #MAGA

Morse said he hopes that CSU can host a debate between the Polis and Morse campaigns during the election.