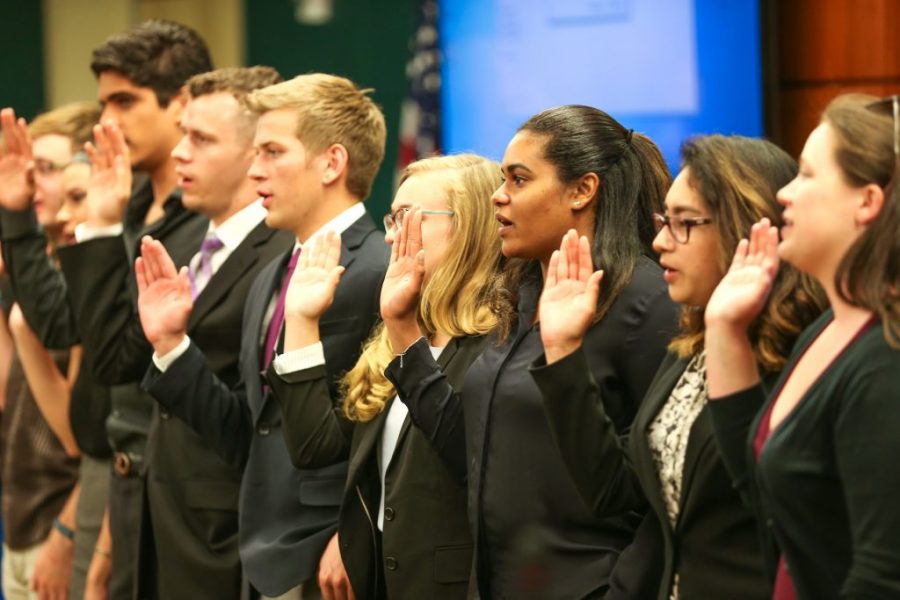 An amended version of Resolution 4603, which would establish an agreement between voter registration group New Era Colorado and the Associated Students of Colorado State University, was approved with by a 13-1-2 vote Wednesday night.

The amended resolution was still met with opposition from some members of the senate.

Senator Juan Caro made the only dissenting vote towards the resolution.

Caro is also a member of the Conservative Interest Group, a self-created group of like-minded conservative individuals within ASCSU.

“I don’t agree with this partnership… I don’t find it necessary that we have to partner up with New Era, especially after seeing so much dissent from the conservative groups on campus,” Caro said on the floor of the senate Wednesday night.

Despite the opposition, the resolution was favored by a large majority of the senate body.

Senator Duane Hansen, who also chaired the external committee which amended the resolution, expressed his support for the partnership.

“Most citizens in this country have one responsibility (and) one duty: that is to vote,” Hansen said on the floor. “I think (the partnership) is (ASCSU) enabling students to do that one thing that’s required, or asked of them, as citizens of this country.”

Allegations towards New Era Colorado’s nonpartisan status were the primary cause of opposition towards the partnership. Last week, Caro questioned whether New Era Colorado had received $300,000 in donations in exchange for advocating on behalf of liberal policies, as well as receiving a total of $45,000 in grants from the Gill Foundation, a Denver-based LGBTQ advocacy group.

However, according to New Era Colorado Executive Director Lizzy Stephan, the c(3) nonprofit is allowed to accept donations from groups, as long as they do not advocate for a political policy or candidate based on the donations.

“Our fundraising is like any other charitable organization,” Stephan wrote in an email to the Collegian. “We get funding from a diverse group of individual donors, grants, foundations and some local businesses.”

The Collegian yet to review IRS documents released by New Era Colorado with regards to the $300,000 the nonprofit allegedly received.

The New Era Colorado Foundation, which engages in voter registration on campus, is a 501c(3) organization under the IRS. A 501 c(3) organization is tax-exempt, and cannot engage in activities related to the advocacy for or opposition of political issues or candidates running for political office.

It was because of these claims that ASCSU’s external committee made amendments to Resolution 4603 at 12 p.m. Wednesday to address potential partisanship and accountability of the organization.

The original resolution allowed for New Era Colorado to engage in educating voters in candidates and their platforms.

According to the resolution, members of New Era Colorado and trained members of ASCSU engaging in voter registration are also required to distinguish themselves as members of their respective organizations by wearing related materials.

A sunset clause was added to the resolution, which will end the partnership between New Era Colorado and ASCSU on 11:59 p.m. Oct. 17, 2016.

An incident report form was also created by the Director of Governmental Affairs Josh Williams for concerned students and faculty in order to hold both ASCSU and New Era Colorado accountable for any incidents of partisanship.

The incident form, which requires a description of the incident and of the person interacted with, can be requested by email. It can then be submitted to ASCSU’s front desk or emailed back to the same email address.

“We will make sure that if there is anything going on on behalf of ASCSU or by members of New Era Colorado, we will move to address it as fast as we possibly can,” Williams said.

Collegian reporter Gabriel Go can be reached at news@collegian.com or on Twitter @rgabrielgo