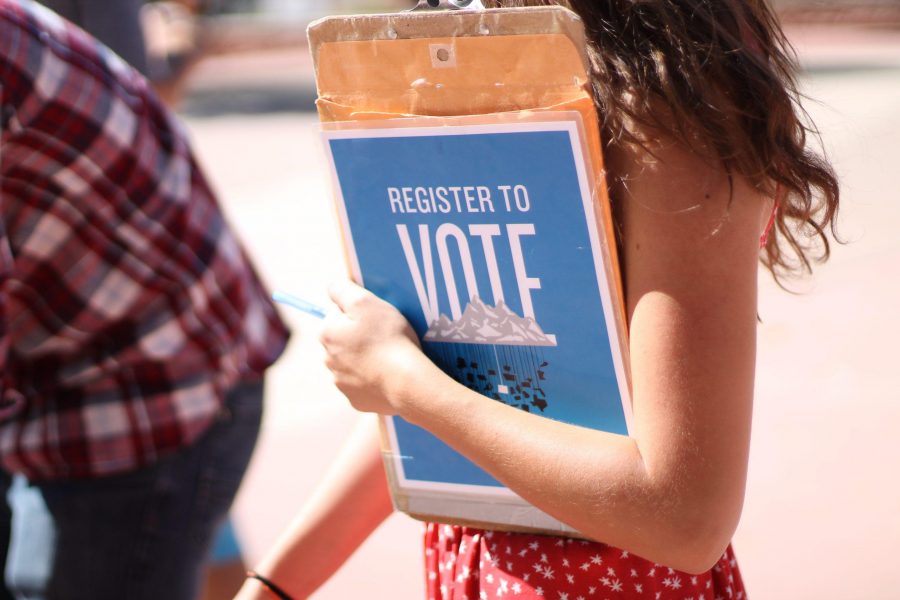 Students and faculty at Colorado State University came together on National Voter Registration Day, Sept. 27 to register to vote and express their sentiments about the upcoming November election.

On Tuesday, New Era Colorado Foundation registered 660 voters on college campuses across Colorado, including CSU, the University of Northern Colorado and the University of Denver according to a post on their Facebook page. Yesterday,  they registered more than 1,000 voters across Colorado and are on track to register 50,000 voters this election cycle, Lizzy Stephan, executive director of NECF, wrote in an email to the Collegian.

University students and faculty members, who are registered to vote, stated their thoughts on the election, in light of Monday’s Presidential Debate on Tuesday.

Cyrus Salvani, sophomore zoology major, said he plans to vote in the upcoming election for the first time. Salvani said he is voting because he believes the election is crazy and has chosen to pay more attention to politics. Salvani stated he is concerned about race relations.

“People make a big deal out of race, period…I’m looking to see if a candidate would want to try to change how we look at race in general” Salvani said.

Salvani also stated that, regardless of the outcome of the upcoming election, individuals still have the power to come together and make a difference.

“Whoever we choose will cause a great controversy…a big push toward something…even though they are in power there are still things we need to do together,” Salvani said.

Francesca Giambrone, a sophomore equine science major, said when she votes in November, she will support the candidate who she believes can create the best possible world for future generations.

“From what I’ve seen, there is a very big split between the ideas,” Giambrone said. “.. I’m 19, but if I had a kid, if I had a daughter, who would I want protecting my daughter? I think that’s important.”

Gimbrone also said her concern over the lack of conceptual policy debates taking place during this election cycle.

Valerie Reed, Assistant Events Manager at the University Center for the Arts, believes this election has been polarizing and the “political middle” has received little representation.

“Most people are very, very committed to pulling the country apart and representing their own self-interests,” Reed said.

However, there are other voters who remain undecided about who they want to support this fall. Shannon Gerney, senior dance major said that she has yet to favor a political candidate.

“(I’m) still working on it, because I don’t like either of the two main options,” Gerney said.

Regardless of political affiliation, young people are engaging in the national political dialogue. Meghan Patton, junior communication studies and English major, stated this election has started a conversation among young people.

“It’s a very critical point historically, and seeing the huge sentiment that has arisen in recent decades among the younger crowd…it seems like more people of my generation are being invested,” Patton said.

Patton believes people are invested in the election because of its controversial nature.

Patton encourages others to vote this election season.

“It may feel hopeless, but you do have a voice. This is your opportunity to express it,” Patton said.