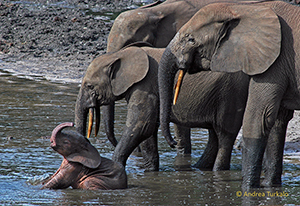 In a new study, it would take a century for elephants to recover from the effects of poaching. (Photo courtesy of Andrea Turkalo)

African forest elephants are the largest land mammals on earth, are highly intelligent and have close family ties. But until a few years ago, few specifics were known about elephant social structures, reproduction rates and the effects of poaching across Africa. Now, new research by a professor at Colorado State University, in junction with his colleague abroad, has shed light upon the intimate lives of one of the planet’s largest creatures.

George Wittemyer, an associate professor in Fish, Wildlife and Conservation Biology and Wildlife Conservation Society scientist Andrea Turkelo collaborated on a paper that found that forest elephants need a century to recover from poaching due to slow reproduction rates.

According to the “Save the Elephants” press release after researching forest elephants from 1990 to 2013, Turkelo learned that elephants have long reproductive cycles and close matriarchal communities. As a result, this population has significantly decreased in recent years due to the increased poaching of young and old female elephants.

“There has been a lot of killing and reduction in populations,” Wittemyer said. “It is going to be difficult for populations to recover, and it is going to take a long time.”

According to the press release, elephants only give birth once every five to six years, and it can take over twenty years before an elephant begins to reproduce. Therefore, when poachers kill elephants for their ivory tusks and teeth, this creates an enormous hole in the elephant community. Because of their slow reproduction rates, it can take decades to reestablish elephant populations.

“You have an animal that is as large as an elephant, and it can’t hide. It is something we need to be concerned with,” Dr. Kenneth Wilson said, Professor and Department Head for the Department of Fish, Wildlife and Conservation Biology at CSU.

Wittemyer said the increase in elephant poaching has been on the rise as a result of globalization. As markets have expanded in recent years, the demand for ivory has had a significant, detrimental effect on the forest elephant population.

“Wildlife products can be risky,” Wittemyer said. “They get out of control and can eradicate species.”

However, the data that Turkelo has collected over the past twenty-three years about elephant reproduction and poaching has also played a significant role in shaping conversations about policy decisions concerning elephants.

According to Wittemyer, before much data was known about the species, early policy conversations concerning forest elephant poaching asked the question, “How much killing can they (the elephants) sustain without being eradicated?”

Now that the data is in, Wittemyer said this newfound information can create a strong foundation for debates about poaching. Lobbyists can use this data to influence policymakers to write legislation that will focus on conservation efforts to help sustain elephant populations.

For members of the public that are concerned about this issue, Wittemyer states that it is important to pay attention to individual consumptive patterns, educate the public about the effects of poaching, and support field conservation efforts.

“Human consumption is key,” Wittemyer stated. “Be an educated consumer.”

“We as humans have to take the information and use it,” Wilson said. “… As a researcher … all we can do is tell the story.”