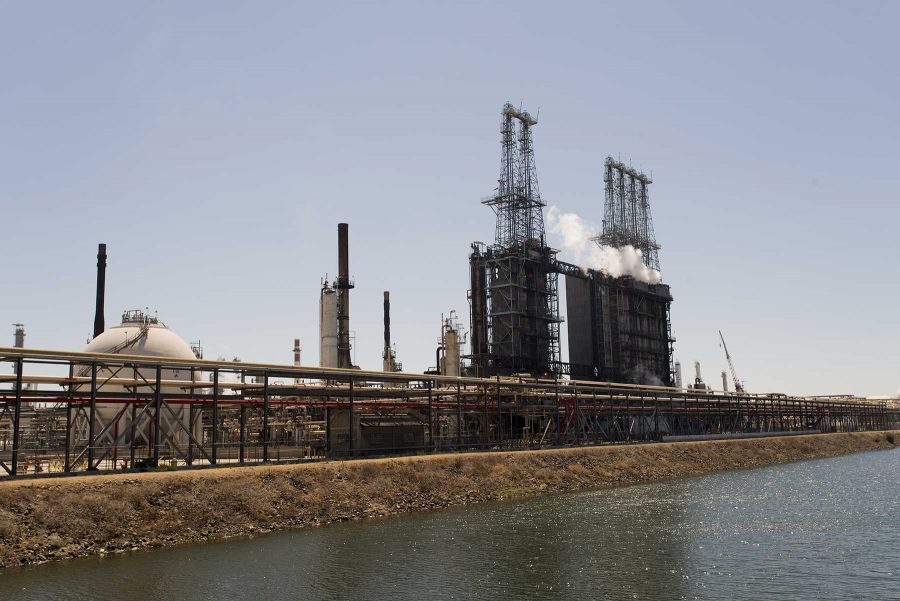 The Coker Unit rises above a canal at the Tesoro Refinery in Los Angels (Luke Walker | Collegian).

Collett measured emissions of air toxins, ozone precursors, and methane from oil and gas production in the Denver-Julesberg Basin, located along the North Front Range. The study documented emissions during fracking, flowback and production.

The measurement of emissions is the first step to analyzing risks to human health, Collett wrote in an email to the Collegian.

The study examined new wells along with ones already in production during fracking and flowback. Flowback is water mixed with clays, chemical additives and dissolved metal ions and solids.

Particular focus was placed on quantifying emissions from oil and gas production sites and from fracking and flowback, which are considered important steps when new wells are completed. Four oil and gas production companies were recruited to participate in the study and provided access to field operations for emission measurements, according to the study.

Flowback has the largest emissions typically associated with it. A similar pattern had been previously reported regarding emissions from new gas wells being developed in western Colorado, Jeffery Collett wrote in an email to the Collegian.

Legislation surrounding air quality control is a controversial topic in Colorado. Collett said strict rules are already in place regarding methane emissions, methane being a potent greenhouse gas. The measured emissions of VOCs that act as ozone precursors will help future plans to reduce ozone concentrations along the Front Range. Currently, the Front Range is considered a region out of attainment with respect to federal air quality standards for ozone.

Between 2014 and 2016, 18 emissions experiments were conducted. Methane emission rates were examined from a variety of different production sites.

The study, which took three years to complete within the North Front Range, is available online. Jeffery Collett is currently traveling and presenting the study’s findings.

Other research conducted by the Collett Research Group within the Atmospheric Science Department at CSU includes the investigation of emissions from fracking, development of new techniques for trace gas measurement and impact of aerosol particles on visibility, according to their website.