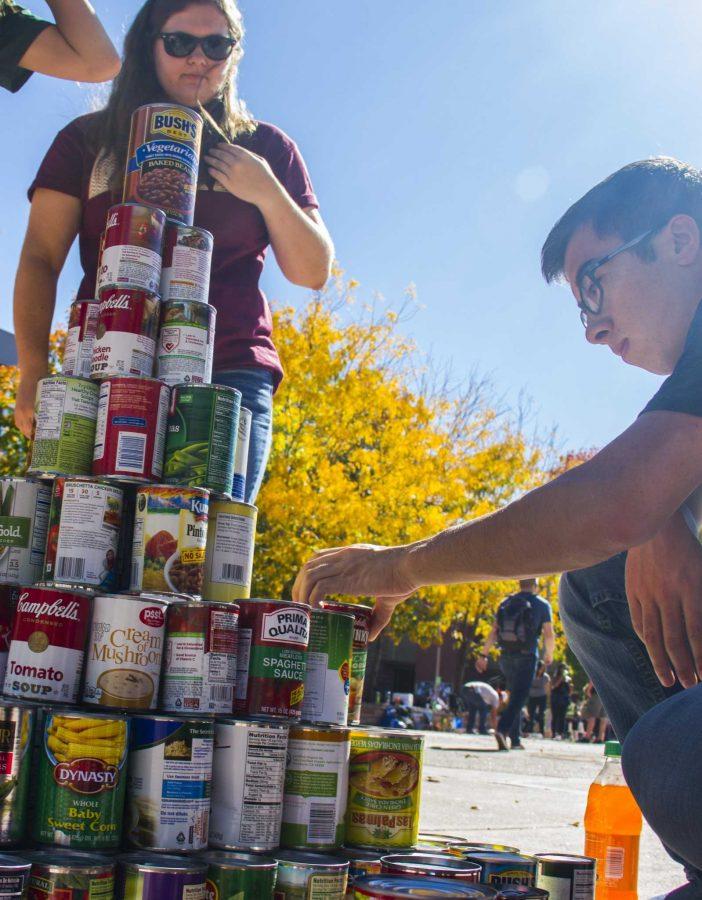 Freshamn Mechanical Engineering student Connor Piko (right) helps set up the Team Rockwell can display on the quad. The event was a competition to see which team could make the most creative display using the cans that they collected for CSU's annual Cans Around the Oval food drive.

The 30th annual Cans Around the Oval will officially begin this week in the ASCSU senate chambers on Wednesday, Sept. 7 from 9 a.m. – 4 p.m.

Student organizations need to register by Wednesday, Sept. 7 in order to participate and pick up can-collecting supplies. Organizations will be competing against each other to see who can collect the most food to donate.

Students wishing to participate do not need to be part of a registered student group on campus.

Cans and monetary donations will be collected. One dollar donated is equivalent to 5 pounds of food. CANStruction, which is an opportunity for students to build structures out of collected cans, will take place on the Plaza on Oct. 5, 2016.

According to the Larimer County Food Bank website, Cans is the county’s largest single-day food drive. Collection day this year will take place Oct. 12, 2016 on the Oval at Colorado State University.

The CSU tradition began in 1986 when the SLiCE office accepted a proposal from a journalism student and contacted the Larimer County Food Bank. Sandy Bowden, the director at the time, was the first to name the event Cans Around the Oval, according to the event’s website. In its inaugural year, the amount of cans collected could only line a fourth of the CSU Oval, but the intent behind the idea and the tradition remained.