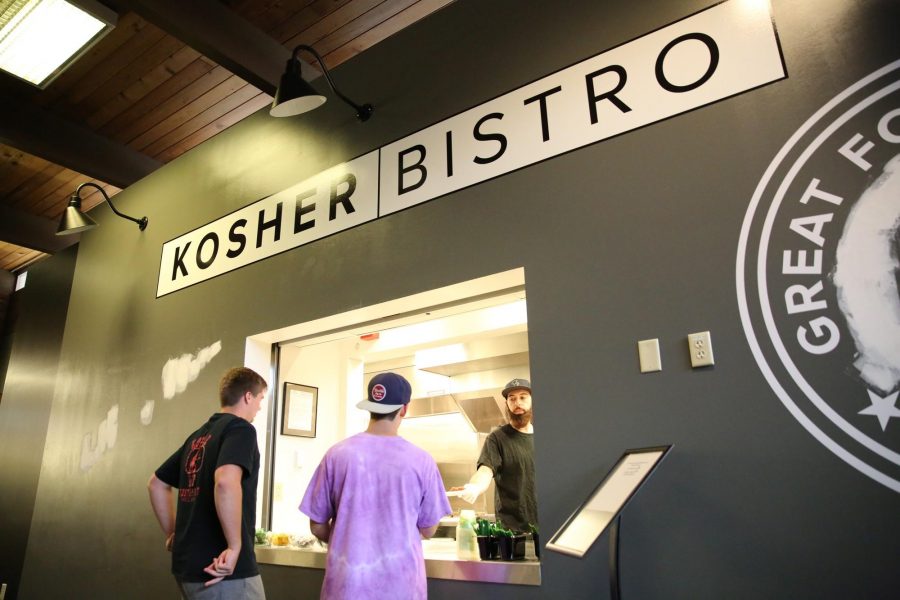 Colorado State University students get dinner from the newly opened Kosher Bistro on Monday night. The Kosher Bistro is located in the Parmelee dining hall and offers all types of food for students. All of the food served is certified Kosher. Photo credit: Forrest Czarnecki

After over five years of work, the Kosher Bistro at Parmelee Dining Center at Colorado State University officially opened on August 22.

The bistro stands as a symbol of the university’s dedication to the Jewish community as well as diversity and education.

“The rabbi’s vision is to introduce this to the entire student body … for students to learn more and understand about Kosher food,” said David Green, Housing and Dining administrator.

The eatery is the product of hours of effort by Rabbi and philosophy professor Yerachmiel Gorelik, the Housing and Dining Staff and university president Tony Frank. However, for two years, the project was not considered financially viable by the university.

According to Elizabeth Poore, Residential Dining Administrator, after observing an early cost-benefit analysis of the plan, it seemed as though the project would be too expensive for the university to undertake. At one point, the university was considering creating a Kosher food truck as an alternative. However, due to university regulations the option was not considered viable.

” … No one could justify the patronage,” Gorelik said. “Then, all of a sudden housing and dining called me and said ‘Rabbi, we’re doing the kitchen.'”

Yet, over the years, Gorelik continued to advocate for the establishment of a Kosher eatery. He argued that it would not only be a unique food experience, but would be an educational experience as well.

Gorelik said that the bistro was made possible because Tony Frank approved the project.

“So I asked him, what happened? (He said) ‘even if there are two or three kids in the university who want to use it, the university could consider that because it is a home for everybody,'” said Gorelik.

According to Gorelik, Kosher means “fit to eat,” and refers to foods that adhere to Kosher standards in the Torah. Gorelik said kosher foods include livestock such as cows, sheep, goats, fish with fins and scales and unprocessed fruits and vegetables.

Gorelik described eating kosher as a cultural and religious tradition.

“It’s a way of life,” Gorelik said. “Families that eat together, stay together.”

A new kitchen had to be constructed to be maintained exclusively for kosher production.

“There are many rules governing kosher,” Gorelik said. “For example, milk and meat are strictly forbidden. No bugs are allowed in vegetables, requiring a detailed process of checking and cleaning.”

Gorelik stated that he examined greens that were triple-washed in search of contaminates.

“I have to come in and do occasional spot checks,” Gorelik said. “But that’s okay, it’s my passion.”

Gorelik said that 50 percent of those who choose to eat kosher are not Jewish, but pursue the lifestyle because they value the high standard of food.

Today, after years of planning, preparation, and the approval of Tony Frank, the bistro is open for business. Although it may become a center for Jewish students to congregate, Gorelik and Poore both emphasized that this is an eatery for all students from all walks of life.

Green said the dining hall is interested in hearing students’ feedback and survey cards will be displayed on dining tables. Green said that although there is still work to do on the bistro, he hopes it will gain popularity.

“I’m excited to see the response we see in the coming weeks,” Green said. “I’m hoping that our numbers will climb real fast.”