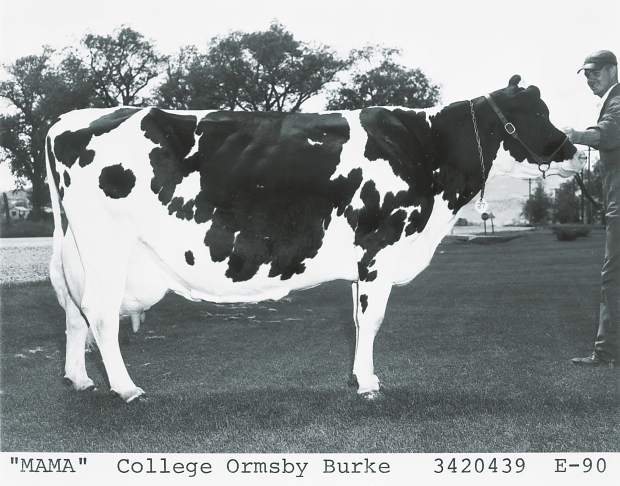 As students bask in the sun of the Monfort Quadrangle, studying and relaxing in between classes, they pass a memorial of CSU history tucked away in the trees.

CSU has a long history of agricultural practices, and in its 146 years of prominence, the program has won many awards. However, “Mama” the dairy cow, left a unique legacy on the program.

College Ormsby Burke, or “Mama”, was a dairy cow owned by CSU in the 1960’s that set world records for milk production. She died 50 years ago in August of 1966.

According to the Fence Post, “Mama” was calved on September 29, 1950, sired by Sir Valentine Hazelwood Burke and birthed by College Bessie Colanthy Ormsby.

“Mama” was raised with the other dairy cows at the CSU dairy farm, but upon her death in 1966, she was a world record holder. Over the 10 years she produced milk, she produced 334,248 pounds of milk. It was a world record at the time, and was held for 10 years. According to the Forgotten Fort Collins Facebook page, it was surpassed by Or-Win Masterpiece Riva of Adrian in 1975.

According to the Midwest Dairy, most dairy cows produce between six or seven gallons of milk a day. Mama produced about 11 times that per day.

“Tipping the scales at an impressive 1,700 pounds, she produced more than 66 pounds of milk daily, which, it was said, could supply all the dairy products required by a family of six for 76 years,” wrote Marty Metzger in his Fence Post article. “Keep in mind that this was during the 1950 and 1960s, when large families regularly consumed large quantities of dairy products.”

Mama went on to give birth to 14 calves, yet none of them surpassed her record. She died on August 19th, 1966, and was buried in the front yard of the old dairy farm.

A memorial was made and erected at the livestock pavilion, where it was later moved to stand outside the Animal Science building, where it remains today. A picture of “Mama”, as well as plaque commemorating her records, are written on a headstone style memorial nestled in the shade of a large tree, just off the sidewalk.

Collegian Blogs Editor Sarah Ross can be reached at news@collegian.com.